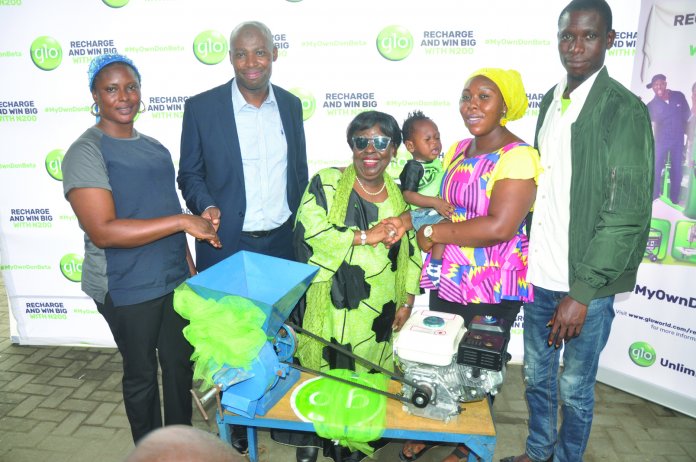 The three Cs generally bandied as constituents of life are Choices, Chances and Change. For one to make it in life, a choice has to be made and a stand taken for one to change one’s status in life. These three Cs are inherent in the mechanics for Globacom’s loyalty reward programme for its numerous subscribers,” Recharge and win big”, popularly and aptly called in pidgin “My Own Don Beta”.

The first prize presentation ceremony was held on Wednesday at the ever busy Ojuelegba Underbridge in the heart of Surulere, Lagos where the first set of winners picked during the first draw held at the Ikeja Computer market a week before then, carted away their prizes.

The Compere, Mrs. Patience Ozokwo, alias “Mama G, G for General” was fully branded in a  green gown with Glo emblazoned on the gown, creatively handled the ceremony, switching from English to pidgin to Igbo and Yoruba.

A representative of the Nigeria Lottery and Regulatory Commission, Mrs. Joy Okunnu, gave the Glo promo a clean bill of health, adding  “the Commission was set up to ensure credibility in lottery business. We are here to ensure by monitoring that things are creditably done. I want to commend Globacom for following due process.”

The joy, happiness and conviviality that enveloped the venue of the prize presentation was infectious as the winners beamed with winsome smiles, pumping hands and exchanging stories of how they felt when they were first called by Glo Customer Service to inform them that they won in the promo.

The mechanics of the promo that makes a subscriber eligible after recharging without pressing an opt-in code is responsible for the surprise expressed by most of the winners. If the promo were such that you send a code to register, many would have known before hand and some would even be expecting to win.

So, lucky Glo subscribers who made a wise choice by picking a Glo line rather than other networks had brightened their chances of winning and moved closer to changing their lives. This is really the kernel of Globacom’s promo which is geared towards enlarging the coasts of lucky winners and bettering their lives through the provision of trade establishment tools like Keke Napep (tricycle), industrial sewing machines, power generators and grinding machines. With N200, any Glo subscriber who recharges with the amount can be the proud owner of any of the prizes.

The first set of winners who kept shouting “My Own Don Beta” like a refrain at Ojuelegba street made popular by immortal Fela Anikulapo Kuti and in contemporary times by Wizkid, included Michael Stanley, a truck driver who said “I was sleeping when Oga Desmond called (during the draw at Computer Village) and said I had won Keke last week. It was like a dream. I feel super excited because I never believed something like this can happen. I live at Ikorodu and work at Apapa. The keke is empowerment. I will give it to someone to be driving and be paying me on daily basis”.

Another Keke winner, Ndidi Okpozor, a professional driver with Mega Point enthused: “I am over happy because I did not believe it when they first called me until they gave me the paper that I won Keke Napep. As far as I am concerned now Globacom is the best network in Nigeria. This opportunity will help me to plan my life well now”.

For 28-year-old Honey Nwuneli,  freshly graduated tailor, winning a sewing machine was an answer to a fervent prayer as gleaned from her take.

Said an elated Nwuneli: “The industrial sewing machine is going to help me a lot. When I was called, I thought it was scammers but they called me three days ago and informed me to go to any Glo office to claim my prize. I am happy because after learning sewing you have to buy sewing machine and God has provided one for me, so I don’t need to buy it anymore. I want to thank Glo for this promo as so many people don’t have jobs. Even if I do not have a shop yet, I can operate from my house. I thank Glo”.

Two of the winners were dramatic in their comments, saying the promo prizes would make their marriages more blissful. Omowunmi Obafemi who hails from Ilesha and recently graduated from the premier university, University  of Ibadan declared that she would take the generator to her husband’s house as she would soon get married. In the same vein, Frank Asanti, a 29-year-old grinding machine winner said: “I will keep the grinding machine for the wife I will soon marry”.

Giving a fresh perspective, Oyewoga Adewale, a 39-year-old teacher at Abusi Edumare Academy, Ijebu Igbo who won a generator said:“I feel very happy. I will use it to generate light at home, pump water and use it generally. My own don beta with Glo!”

One of the special guests and Nollywood legend, Prince Jide Kosoko, in his presentation, greeted guests in the Christian, Muslim and Traditional way, adding, “I want a very strong applause for Glo. As a telco, the main responsibility is service delivery. Now the company is doing more for its valued subscribers”. Also speaking, Mrs Ibidun Allison alias “Amebo” said “Una good afternoon. Na since 2003 we dey Glo with pride. Then we moved to Glo Unlimited. Glo has done a lot for Nigeria. The company has given jeeps (SUVs, cars and houses. Fingers are not equal but Glo is making life easy for everybody”.

The  Special Guest of Honour, Lagos State Secretary to Government, Mrs. Folashade Jaji said: “Congratulations to Globacom for coming up with this initiative. I congratulate all winners. I urge others to emulate this Glo gesture”.

Rave of the moment, Samuel Perry aka Brodashaggi, representing youths, said “Hello! Glo is a network of the people sharing goodness to the people at the grassroots” while the Iya Oja of Ojuelegba, Mrs Mojisola Sanusi prayed that God will continue to prosper Globacom. She added that “Ojuelegba too will not spoil. Eko oni baje”. Without a doubt, Globacom is putting sunshine into the lives of many Nigerians with the “My Own Don Beta” promo and the telco is demonstrating that it cares about the dreams and goals of its esteemed subscribers.

This has been Globacom’s abiding faith since inception when it rolled out with Per Second Billing that drastically reduced the cost of telephony. 16 years down the line, the beat of empowerment is getting louder in Globacom and “My Own Don Beta” promo is one of the numerous ways of upping the ante. From Ojuelegba, the Glo  empowerment train zooms into Abuja next week where another set of winners who were picked at the draws held at Ojuelegba will receive their prizes