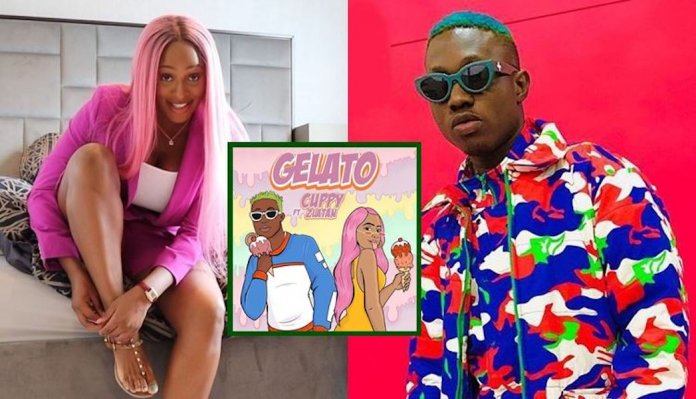 Truth be told, Disc Jockey/singer Florence Otedola aka DJ Cuppy is just having fun as much as she is entertaining her listeners, fans and followers worldwide with her music. Just check out the video to her latest song Gelato, featuring widely acclaimed street hop star, Zlatan Ibile (Omoniyi Temidayo Raphael). Many will agree that the visuals boosted the song rating which was initially received with mixed feelings.

Someone wrote on the social media, “Like the track’s lax theme, the Kaffy-directed video plays up that narrative, yielding a fun-loving fusion and colour fest that does more for the track than its production.”

Shot by Frizzle and Bizzle Films and Kaffy, one thing about this video is that it ended. One had wished continuity. So far since the visuals dropped on October 18, the reception has been positive with apt words, creamy and colourful! So much that you might be tempted to lick your screen from all the cream and colours dripping in the “Gelato” video.

The video is characterised by beautiful scenes and relieves music lovers who have been waiting for the video. “Nobody knows how long I’ve wanted this video,” so read a comment, just as it drew a lot to the conclusion that this is DJ Cuppy’s second best song after Green Light.

DJ Cuppy serves the baby girl looks in the colourful music video with Zlatan getting a little comfortable with each other as they share some Gelato.

The official Gelato video is enjoying massive views on various platforms. Playing off the viral moment that inspired the song, an ice-cream store is prominent in the video, as Cuppy comes around to buy out the store in one of the highly animated scenes.

Cuppy has consistently delivered authentic and high quality videos since the release of her classic Afrobeat single, ‘Green Light’ up till her sizzling love jam, ‘Abena‘. This time, Cuppy takes viewers on a colourful trip to Candy land with Cuppy, Zlatan and Broda Shaggi catching cruise. A day to the release, the Nigerian and billionaire heiress asked her fans for 20,000 likes on YouTube to release the video. On the same day, she got a shout-out from New York rapper Nicki Minaj who said she would come to Nigerian in December.

In July, DJ Cuppy and her billionaire dad, Femi Otedola while on a summer vacation tour across Europe made a quick stopover in Italy just for a frozen Italian dessert named Gelato. The video of father and daughter duo eating the ice-cream trended on social media shortly after posted. It went viral with established stars and social media influencers latching on it for memes, rehearsals, and skits while goofing.

This year, DJ Cuppy has been on top of her game dishing out singles that stealthily showcase her evolution and maturity in the music industry, leading up to one great moment with Cuppy and Bovi (comedian) reading simultaneously while licking cones of ‘Gelato’ at the 2019 Headies awards presentation ceremony barely 24 hours after the visuals was released.