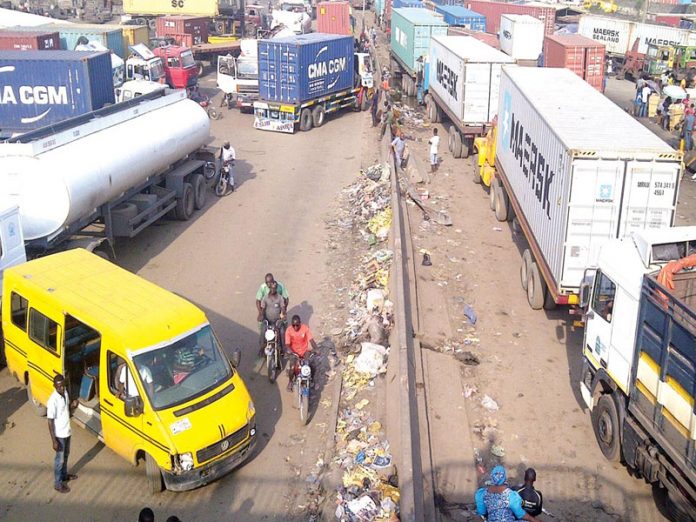 There was palpable tension at the Nigerian Ports Authority (NPA) Lillypond Truck Transit Park at Ijora, Lagos State, Thursday as truck drivers and the officers of the state task force clashed over sundry disagreements.

As pandemonium raged, hoodlums attacked the truck facility leading to the burning of NPA patrol vehicles, two police vans and the death of the yet-to-be-identified truck driver.

An eye witness account said trouble started two days ago when the Lagos State Task Force on Environmental Sanitation allegedly went under the Lilypond/Ijora bridge to clear shanties and street trading from the area, a development which was resisted by the street urchins (area boys) who petted members of the Task Force with sachet water and stones to which policemen attached to the Task Force responded by shooting tear gas at the hoodlums.

As at the time of filing this report, two police Hilux vans set ablaze by the truck drivers were still burning at the Lilypond terminal gate at the truck park.

The terminal is currently engulfed with a bonfire as about two patrol vans and several other vehicles have been destroyed by truckers.

The eye witness said the same Task Force came back yesterday with reinforcement triggering the area boys to launch mayhem on the facility, attacking properties and injuring innocent citizens.

The eye witness revealed that a truck driver who was running for his life fell down and was stabbed to death by the hoodlums.

Condemning the attack, the General Manager, Security of NPA, Mr. Olumide Omotoso, said the facility has been shut down temporarily pending when the situation will be brought under control, adding that business can only thrive in a secure and safe environment.

Omotoso said: “There is commotion and crisis in one of our facilities, and we had to come to do an on-the-spot assessment to be sure of what the actual situation is. The police have waded in, and we do not want to jeopardise the investigation. However, we are on top of the game and we have restored normalcy.”

He said the closure of the facility would be temporary, adding that the police will tell when it will be opened.

On his part, the Vice-Chairman, Apapa Gridlock Presidential Task Team, Kayode Opeifa, said the clash was between the Lagos Task Force and the hoodlums.

According to him, the presidential task force was not involved, it was the Lagos task force that came to remove the hoodlums residing under the Ijora bridge.

However, the Chairman Association of Maritime Truck Owners (AMATO), Remi Ogungbemi, alleged that the truck park was invaded by hoodlums who were backed by the Nigeria Police.

Ogungbemi, who disclosed that he wasn’t on ground to know what really happened said it was the second time the attack was happening.