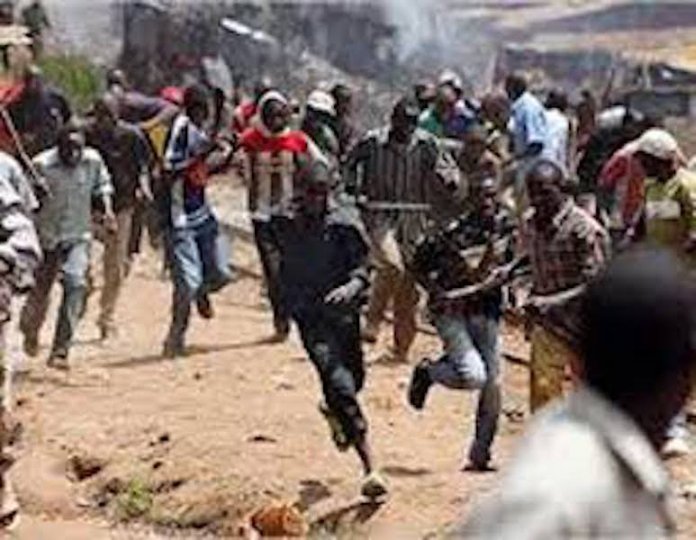 At last, the Jukun and Tiv ethnic groups in Taraba have agreed to a ceasefire, writes Fanen Ihyongo

At the end of a two-day peace talks held at Government House, Jalingo, a 30-man committee, set up by Governor Darius Ishaku, succeeded in making the warring communities sign a new peace deal and called for suspension of hostilities. They have directed that all road-blocks in the affected communities should be dismantled and local markets in the areas reopened.

They also called for the release of all victims who were kidnapped during the hostilities. They urged the government to provide relief materials and ensure the return of all displaced people to their ancestral homes.

Jukun and Tiv ethnic groups of Southern Taraba have been at daggers drawn for some time now. Several efforts made in the past to bring peace between these closely-tied neighbours had been futile. The latest outbreak of hostilities had been on for over six months.

Many lives were lost on both sides, while property, including homes and food stuffs estimated at millions of naira were destroyed. The Federal University in Wukari was shut down for fear of the crisis spilling to the campus.

The crisis reached a crescendo when a 42-year-old cleric, Rev. Fr. David Tanko, a peace broker, was killed and his corpse set ablaze. The priest’s murder prompted President Muhammadu Buhari to call for a peace dialogue between Tiv and Jukun from Taraba and Benue States respectively.

During the meeting which was held at the Shehu Musa Yar’Adua Centre, Abuja, Benue State Governor Samuel Ortom proposed that the federal government should set up a commission of enquiry into the crisis. But Taraba State Governor, Darius Ishaku, strongly objected to the idea of bringing ‘strangers’ into the matter. He suggested that “the problem is ours; it’s an internal problem; we shall look into it and resolve it.”

Ishaku later set up the new committee and gave the warring groups a seven-day ultimatum to sheathe their swords for the committee to work effectively.

The new peace committee, which has been hailed by all as likely to succeed, is to examine and bring to an end all issues underlying the persistent clashes between Jukun and Tiv ethnic groups. The committee has 15 representatives each from Tiv and Jukun communities, drawn from the affected areas which include Wukari, Donga and Takum.

The committee held a peace dialogue in the Executive Chamber of Government House, Jalingo -the Taraba State capital. In their midst were the Secretary to the State Government (SSG) Anthony Jellason, representatives of the police, army, civil defence corps and the Department of State Services (DSS).

The meeting was chaired by the Taraba State Deputy Governor, Haruna Manu, who, together with the SSG on behalf of the state government, signed the communique that was issued at the end of the meeting. Danjuma Adamu, Markus Ikitsombika and John Mamman signed the communique for the Jukun community while Jime Yongo, Kurason Kura and Isaac Waakaa signed for the Tiv community.

The communique reads: “Speakers at the meeting condemned the crisis and stressed the need for the cessation of all forms of hostilities between the two communities to pave way for the peace-building effort being spearheaded by the Taraba State government…”

One of the signatories of the communique, Danjuma Adamu (Jukun) revealed that during the peace meeting, the committee split into Team Tiv and Team Jukun to sketch their submissions. “We in the Team Jukun were just clapping as the Tiv made their presentation. The issues they raised were exactly the same with ours, as if they spied or copied from us. So, it was not difficult marrying or harmonising the two submissions. We just adopted them.”

The Tiv/Jukun crisis is an offshoot of a protracted feud based on a claim by the Jukun that the Tiv are “settlers,” in Taraba State, and therefore, have no ownership rights to the land they occupy. The conflict, reverberating in intervals of 10 and 20 years, first erupted in 1959. It reoccurred in 1980, 1990, 2001 and 2019, according to records.

The Tiv, on the other hand, use the longevity of their stay in Taraba to repel their settler status by claiming both land ownership and political rights in the area. These seeming claims, passed on to Jukun/Tiv offsprings, generate bloody scenes, as both groups try to prove they are no weaklings.

Thus, this year, a misunderstanding between two Tiv and Jukun youths in Kente -a rustic village in Wukari, spiraled into full blown violence. On April 1, the chairman of Wukari (Taraba) and his counterpart in Ukum (Benue) Local Government Areas held a peace dialogue, but the meeting ended in fracas, rebirthing the century feud.

Beneath the misunderstanding in Kente that snowballed into bloodbath, like Luka Agbu, a former President of Jukun Youths of Vision in Wukari has observed, there has been an age-long suspicion between Jukun and Tiv.

“Why should two peasant farming tribes, struggling for survival, take up arms against each other? There has been an age-long suspicion in the heart of a Tiv man against his Jukun brother and vice versa. This must be addressed.

Governor Darius Ishaku is an ebullient leader who wants to work and leave behind a legacy. But insecurity and crisis are his enemies. In his first term, clashes between herdsmen and farmers were his major challenge. There was bloodbath on the Mambilla Plateau as there were killings in the lowlands of the state, because of cows, grasses and farm crops. Against all odds, Ishaku tackled the herders’ menace through the instrumentality of the law, prohibiting open grazing. The law also prohibits cattle rustling. Herders now have to restrict the movement of their cattle so that they don’t stray into farms and munch on crops. He has brought a template of peace, bringing the warring cattle herders and crop farmers together to nurture a symbiotic relationship.

After the herdsmen/farmers challenge, there was a resurgence of the conflict between Jukun and Tiv. The crisis is uncalled for, coming at a time when the governor is Jukun but married to a Tiv woman -when the two ethnic groups are supposed to be enjoying the best of their interaction which predates colonialism. The governor has solved one aspect of the impasse, by declaring that Tiv in Taraba are indigenes, not settlers. This justifies why the governor, in his first term, appointed many Tivs as advisers and senior aides. He named Rebecca Manasseh, a Tiv woman, as Commissioner of Environment. There are over 80 ethnic groups in Taraba State, so having one Tiv person in the executive cabinet means a lot. It means having an ear and eyes in the state’s developmental agenda.

For those who do not know, Darius Ishaku’s wife, Anna, hails from Vandeikya Local Government Area of Benue State. Ishaku’s children are naturally Jukun and naturally Tiv.

In 2014, the Tiv in Taraba State were displaced from their ancestral homes by herdsmen marauders. When Ishaku came on board, he made sure the displaced were all brought back to their homes and rehabilitated. The governor, with his popular “Give me Peace, I will Give you Developments” slogan, went a step further, to suspend 10 traditional rulers accused of tampering with land belonging to Tiv people. Ishaku became the ‘messiah’ and cynosure of praise by Tiv. But that was then.

In his Rescue Mission in education during his first term, Ishaku rehabilitated schools and provided furniture and writing materials. To deliver quality education, he recruited 3000 teachers which were trained to update and enhance capacity. Out of the 3000 employed teachers, Tiv alone got 400 slots.

Before the crisis erupted, Ishaku and his Benue counterpart, Samuel Ortom, had met several times in Wukari, Logo and other border areas to seek peaceful coexistence between Jukun and Tiv.

Ishaku deserves some honour from the Tiv people, for all that he has done (and still doing) for them. He has been disturbed by the crisis so much that he did not celebrate his birthday on Tuesday, July 30, when he clocked 65years. “How can I celebrate when there is bloodletting of people in my state?” he had asked.