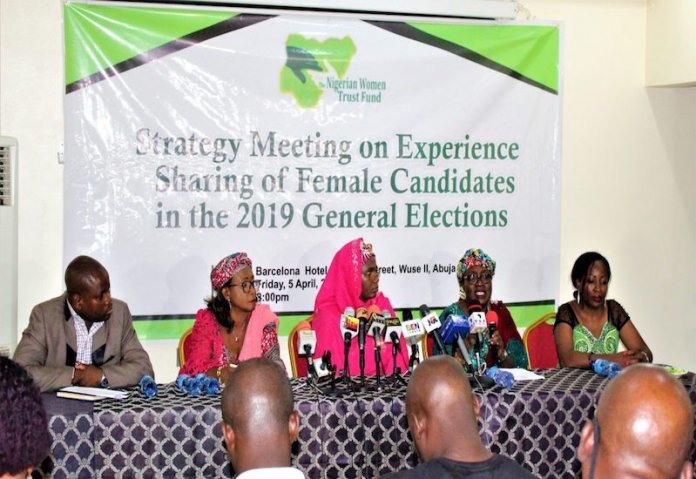 Kemi Olaitan writes that a report on the 2019 general election published by Nigerian Women Trust Fund, in partnership with the Women’s Rights Advancement and Protection Alternative with support from MacArthur Foundation puts in perspective the issue of gender inequality and enhancement of women’s participation in politics

Seven months after the 2019 general election which President Muhammadu Buhari won for a second time, virtually all other winners are in already in their offices and the losers either at the tribunals, appellate courts or strategising for another day, but the reverberations have not stopped as reports continue to be spew out on various roles played by major stakeholders before and during the elections.

Recently, a non-governmental organisation, the Nigerian Women Trust Fund (NWTF), organised a round-table where it presented a report titled, “Women’s Participation in the 2019 General Election from an Accountability Perspective : Kano and Oyo Under Spotlight”, prepared by its arm, Gender and Election Watch (GEW), to highlight the various inhibitions faced by women in the electoral process and by extension the overall democratic process.

The Chief Executive Officer of the Nigerian Women Trust Fund (NWTF), Hajia Mufuliat Fijabi, while welcoming participants, said the report was done with the aim of examining the extent to which corruption limits or reduces women’s participation in good governance, stating that the need for Gender and Election Watch (GEW) became imperative as there exist gaps in collating the core issues affecting women aspirants, candidates and female voters in the election cycles. She stated that women have important roles to play in any election as they are the ones that bear the outcome; whether positive or negative.

According to her, “It is routine to talk about electoral fraud, ranging from vote rigging, ballot stuffing, voting age manipulation to officials deliberately and knowingly abusing voters regulation. It is important to remember however that electoral fraud is underpinned by the same lack of answerability and enforcement as a regular occurrence in the conduct of governance. Elected officials break the law and then compound the citizens’ helplessness by corrupting the elections in which they are standing.

“These are some of the reasons women ought to be as concerned about and mobilize against the wider corruption and lack of basic accountability at every level of of governance. NWTF holds strongly that while women may not have been directly excluded from voting in elections, ‘practice of democracy’ nonetheless weakens women’s participation overall. It makes it difficult, for example, for more women to have meaningful participation in the affairs of political parties.”

“It is necessary that all stakeholders – citizens, media, politicians and civil society organizations scrutinize INEC on a regular basis and in so doing make it to be accountable to citizens and not to politicians. INEC needs to make its presence felt more strongly in the political sphere. It can do this by undertaking regular public awareness campaigns both outside and during election cycles about the rights of citizens in elections and also the conduct of elections.

“The regime on campaign finance should be promoted more widely across media, civil society and NGOs, in order to enhance the transparency and accountability of the electoral process. INEC should investigate as a matter administrative routine, the spending by political parties after each election to determine if they had kept within the law. And where they have not, sanctions should be immediate and publicly stated.

“INEC must treat electoral offences including vote buying/voter inducement/voter suppression etc. as serious crimes and prosecute offenders summarily through the courts. Electoral law should be made available to citizens in pamphlets written in English and in as many local languages as possible. Radio and television broadcast will also be vital for reaching citizens in non-English languages.

“Much of the difficulties in INEC’s electoral mandates such as getting accurate voters’ registration, security of election materials, transportation, can be addressed easily by working in statutory collaboration with state and local governments on exchange of data on population growth and movement. To ensure an inclusive electoral process, INEC has obligations to make legislative recommendations for electoral improvements that will lead to greater political participation by women.

“INEC must renew its commitment to gender equality and women’s participation in the electoral process by following through the ‘Promoting Gender Equality in the Electoral Cycle’ recommendations by the UNDP/UN WOMEN14 and by sustaining the momentum on its political will around the INEC Gender Policy.”

On general recommendations, Fijabi said, “Security agencies to re-strategize on how to assist the election management bodies to curb both vote trading and electoral violence. Bringing those who indulge in vote trading and bringing them to book will go a long way to de-monotize our electoral process.

“Electoral Offences Commission (EOC) should be set up to relieve INEC of the herculean task of prosecution of electoral offenders. The recommendation for EOC and Tribunal had been made since 2008 by Justice Uwais Presidential Committee on Electoral Reform. A bill to back that proposal up had been before the 8th National Assembly, it would be heartwarming to have that bill passed and sent to the President for assent.

“INEC should work to make public sex distribution data of registered and actual voter per state and LGAs.”

The National Chairman, Independent National Electoral Commission (INEC), Prof. Mahmood Yakubu, represented by a National Commissioner, Dr. Adekunle Ogunmola, in his keynote address, said activities and engagements of the 2019 general elections showed high level participation of women in the electoral process as aspirants, noting however that despite the various interventions by the Commission, the women regressed in the number that won elections due to barriers.

He said, “The party primaries amongst others fell short of expectations as many women could not secure tickets to represent their parties. During the elections, only five out of the 73 candidates who ran for the position of the President were women, 1,668 men and 232 women vied for the 109 senatorial seats while 4,139 men and 533 women contended for 360 seats in the House of Representatives. At the end of the election, only seven women won senatorial seats and 11 were elected into the House of Representatives while four were elected as deputy governors.

“The huge efforts made by the Commission to support the participation of women in the electoral process did not succeed in addressing the decline of women’s representation in politics. This has become worrisome as women’s participation in governance and leadership is not only essential prerequisite for removing gender inequality but also the attainment of basic human rights.”

“The Commission established a gender division to drive the process of its strategic intervention in opening the political space for participation by women. The division has been undertaking targeted, effective and comprehensive multi-dimensional approaches to addressing the dwindling fortunes of women, in terms of political participation within the electoral space.

“The implementation of the INEC Gender Policy (IGP) since 2014 has witnessed remarkable progress within the Commission and the wider electoral process leading to the 2019 general elections.”

Only five out of the 73 candidates who ran for the position of the President were women, 1,668 men and 232 women vied for the 109 senatorial seats while 4,139 men and 533 women contended for 360 seats in the House of Representatives. At the end of the election, only seven women won senatorial seats and 11 were elected into the House of Representatives while four were elected as deputy governors