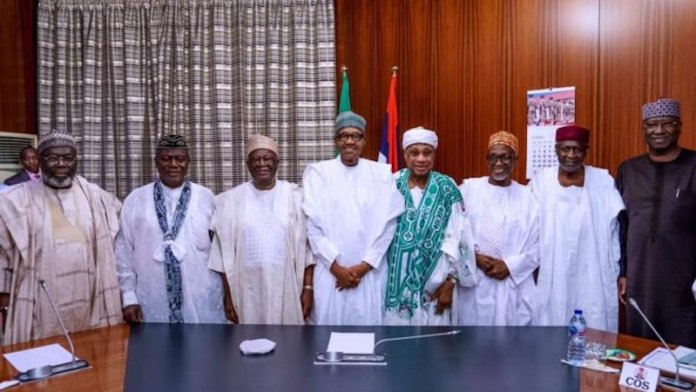 On Wednesday, October 9, President Muhammmadu Buhari, GCFR, summoned all the ministers that served under him when he was the military Head of State between January 1984 and August 1985. He summoned them to the State House in Abuja in what is now referred to as the reunion of class 84/85. Why President Buhari summoned these ministers after more than four years as president and after he has been overthrown as a military ruler since 1985 could be better explained by President Buhari himself.

At the reunion, one of the former ministers, Major General Mohammed Magoro (78), Galadima of Zuru, appeared in an unusual dress. He wore a green and white babariga and the dress surprised President Buhari himself. The material for the dress was ordered in 1985 by the Ministry of Internal Affairs during the tenure of General Magoro as minister and the ministry was charged with the responsibility of organising the silver jubilee anniversary of Nigeria’s Independence. General Magoro was made the Chairman of the organizing committee.

Actually the dress was to be worn by the then General Buhari, the then Chief of Staff, Supreme Headquarters, Major General Tunde Idiagbon and all the ministers and members of the Supreme Military Council to mark the 25th anniversary of Nigeria’s Independence on October 1, 1985. The dress was never worn for, a few days before the anniversary, General Buhari was toppled by General Ibrahim Babangida, GCFR, on August 27, 1985.
General Magoro decided to keep the dress since then. He is an emotional man and a man of history. The action by Magoro speaks volume about the Galadima of Zuru.

On seeing the dress on General Magoro, President Buhari became emotional and nostalgic. He embraced his old friend. As Bob Hope said, “When we recall the past, we usually find that it is the simplest things not the great occasions that in retrospect give off the greatest glow of happiness.” Memories are treasures that we keep locked deep within the storehouse of our souls, to keep our hearts warm when we are lonely. No matter what, happy memories never wear out. We all take different path in life, but no matter where we go, we take a little of each other, everywhere.

General Magoro and President Buhari have been friends since they joined the army on December 10, 1962 when they both enrolled at the Nigeria Military Training College in Kaduna. In February 1964, the college was upgraded to an officer commissioning unit of the Nigeria Army and renamed the Nigerian Defence Academy (NDA). Prior to 1964, the Nigerian government sent cadets who had completed their NMTC preliminary training to mostly Commonwealth military academies. One is Fulani who harbors no fear of consequences while the other is Zuru, a land of warriors that today still has a warrior, Major Sani Sami as Emir.
Under General Olusegun Obasanjo, GCFR, they both became ministers in 1978. While General Buhari was in charge of Petroleum Resources, General Magoro was in charge of Transport.

They have been close since then. The bond between them is still on till today. They have kept the flag of espirit de corps flying. Each took the different routes in their journey in life.
The secretary of the Government of the Federation, Boss Mustapha and the Chief of Staff to the President, Alhaji Abba Kyari were the only non-former ministers who were present at the reunion. Sadly only five of the 18 ministers were present. Those present were Major General Magoro (Internal Affairs), Dr Emmanuel Nsan (Health), Alhaji Ibrahim Abdullah (Education), Dr. Ibrahim Gambari (Foreign Affairs) and Brigadier General Ahmed Abdullahi (Communications).
On December 31, 1983, Major General Buhari toppled Alhaji Shehu Aliyu Shagari. He told the nation on January 1, 1984 that “this generation of Nigerians and indeed future generations have no other country than Nigeria. We shall remain here and salvage it together.”

In swearing the governors he said, “You are therefore subject to redeployment at any time as the exigencies of our calling may dictate. All Military Governors are answerable to the Chief of Staff (Supreme Headquarters). The channel of communication with me on all matters affecting the Governance of the state or the Federation is through the Chief of Staff (Supreme Headquarters) who shall be responsible, inter alia, for the co-ordination of states administration.”

While he swore in new governors on Wednesday, January 4, 1984, he did not form his cabinet until Wednesday 18, 1984. In swearing in the new ministers on that day, he declared, ”It is necessary to restate that this administration, born out of the circumstances very well known to you all, will not tolerate fraud, indiscipline, corruption, squandermania, misuse and abuse of public office for self or group aggrandizement and such other vices which characterized the civilian administration in the pasts four years. These vices which have eaten deep into the very fabric of our society will be fought with all the resources at our disposal and the co-operation of all Nigerians. You therefore have the golden opportunity to pilot this crusade of national rejuvenation by giving Nigeria a new sense of direction, hope and pride and I believe that you will not fail the nation. Good leadership cannot but be by example.”

The reunion on October 9 must have had serious emotional impact on both men because they were celebrating 57 years of friendship.
I am wondering why General Domkat Yah Bali (79),the Ponzhi Tarok, the fine officer from Langtang in Plateau State, was not at the reunion. He served in the military between 1961 and 1990 and it’s been long since we have heard from him. What about Dr. Mahmoud Tukur, the first Vice Chancellor of Bayero University in Kano? I knew him in 1976 when he was a member of the Constitution Drafting Committee. He was a member of the sub-committee on Citizenship, Citizenship Rights, Fundamental Rights, Political Parties and Electoral System. The sub-committee was headed by late Alhaji Aminu Kano. It’s been long we have heard from him. What about Professor Tamunoemi Sokari David-West (83) from Buguma, Kalabari in Rivers state. He even wrote a book titled “THE SIXTEEN SINS OF GENERAL MUHAMMADU BUHARI”.

It’s been long we have heard from him. What about Admiral Patrick Sebo Koshoni (76) from Popo Aguda (Brazilian quarters), Kakawa, Bamgbose in Lagos Island, who eventually retired as Chief of Naval Staff. A fine gentleman officer and a staunch Catholic. During his tenure as health minister, he tried to kick start a national insurance scheme. It’s been long we have heard from him. What about Dr. Olusegun Onaolapo Soleye, who was promoted as Ogun State commissioner of finance to be the Minister of Finance in 1984. DR. Soleye’s major policy actions during his tenure as Minister of Finance include: policies preventing drastic devaluation of the Naira; refinancing of trade debt arrears insured by international organisations; supporting the rationalization and restrictions of imports, stopping the trend of budget deficit financing and creation of new naira notes to stop currency smuggling, etc. It’s been we have heard from him.

Now that President Buhari has invited his ministers who served between 1984 and 85 for a reunion, he should also extend the same invitation to members of the defunct Supreme Military Council still alive and his former Military Governors still alive who served under him between 84 and 85 for a reunion too, for they are members of class of 1984 and 1985.
Reunion after long separation is even better than one’s wedding night. Every parting is a form of death, as every reunion is a type of heaven. Looking at people who belong to us, we see the past, present and future. A reunion is expected to rekindle the past, access the present and proffer solution to the future. To me, a reunion should not only be about the past. I hope General Magoro and his colleagues must have informed President Buhari of the plight of Nigerians at the moment. There is so much disillusionment in the land.