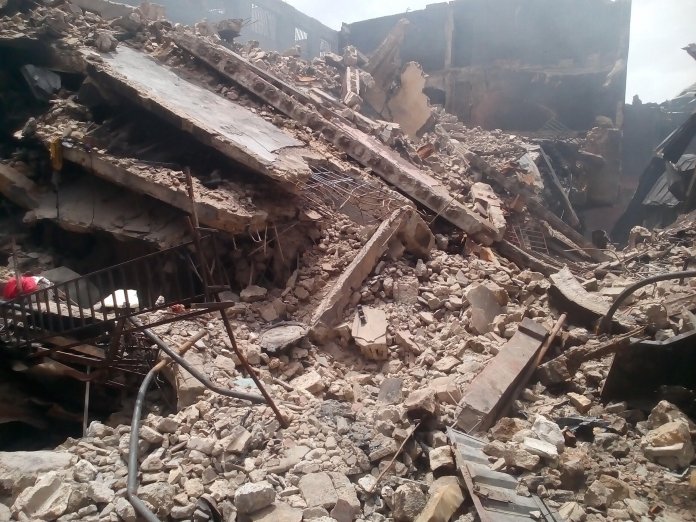 Within three days last week, it was a tale of anguish and helplessness as four different fire incidents rocked Anambra State, claiming lives and leaving goods and property worth billions of naira in ruins, writes David-Chyddy Eleke
In just the space of three days, four fire incidents rocked different parts of Anambra State leaving in its wake a  devastating loss.
Its been a tale of pain, anguish and helplessness all rolled into one as the victims counted their loss. The fire did not just claim lives but it also destroyed properties and goods worth billions of naira.
In each of the scene, the fire often starts undetected and then it snowballs into huge flames greedily gutting everything in its path. These incessant fires have unarguably rendered many homeless, made children orphans, families bereaved and ruined many financially.

Wednesday, October 16, was just like every other day for a normal trader in Ochanja market, but the day ended up on a sore note. A massive inferno broke out in the market and before the day was gone, shops which were hitherto  booming with wares were all razed, leaving their owners bereft of their source of livelihood.

On Thursday, October 17, the very busy market was even busier as traders had to constitute themselves into a search team to seek out their counterparts who had been trapped in rubbles. While this was going on, the market also witnessed an influx of sympathisers, both from the state government and other well to do individuals who came to commiserate with them over the incident.

The people hadn’t still gotten over the incident when on Friday, residents woke up to the news of a fresh fire outbreak. In the previous incident, over 200 shops, contained in over 20 buildings, and some residential buildings too had been razed down completely. The worth of the wares of the traders have not yet been quantified financially, but beyond all, a total of seven persons have been confirmed, who lost their lives in that incident.

In the Friday fire disaster, which was said to have occurred at about 3:45 am, THISDAY gathered that a petroleum product laden tanker had hit a stationary caterpillar, fell into a ditch and spilt its product, which also caused another major fire outbreak, around Omagba phase two in Onitsha.

Our correspondent gathered that the incident caused pandemonium in the town because of Wednesday’s incident, which resident of the city were yet to recover from.

The residents of the area who were all still asleep when the incident happened were forced to wake, while many were said to have scampered out, not knowing where they were headed, but determined to leave the area.

Narrating the incident, a source said, “PMS-laden tanker early this morning lost control and rammed into a parked caterpillar in front of Bessoy Filling Station, along Enugu-Onitsha Expressway, Onitsha. As the tanker emptied its content on the tarmac where there were parked cars, balls of fire erupted. Fortunately, the men of the Anambra State Fire Service got here on time and quenched the fire.”

At the end, the incident, just like the first, resident of the area had a lot of loss to count. THISDAY gathered that the petroleum product had ignited fire in the area, which flowed into two automobile mechanic workshop, burning down a total of 22 cars, while some houses were also affected.

As if it was not enough, on the same day, another incident was registered in Agulu, Anaocha Local Government Area of Anambra State. The incident happened at about 7am when a truck conveying petroleum product lost its brake, while trying to make a u- turn in the town.

This time, there was no fire incident as all safety agencies in the state worked to avert one. The Anambra State Police Command Spokesperson, SP Haruna Mohammed who confirmed the incident, said the Commissioner Police, CP John Abang also visited the scene and that fire service department was equally on ground.

When our correspondent arrived the scene at about 12pm, another truck had been brought to evacuate the content of the fallen tanker, while police men were seen cordoning off the area to prevent casualties.

Another fire accident which occurred on the same Friday at Nnewi however involved no tanker. A mystery fire had gutted a motel in the city, leaving  three girls said to be workers dead as a result of the fire. The cause of the fire remained unknown.

The incidences have left the state in mourning, as sympatisers have also been trooping in. Dr Obiora Okonkwo a politician and business man from the state who was in the market on Saturday afternoon expressed shock at the magnitude of damage. Okonkwo who began his visit at the scene of the fire tanker also went to Toronto Hospital where some of the victims were being treated.

He expressed surprise that the tanker which fell at Upper Iweka caused absolutely no damage in the area, but moved about four kilometers away where it now consumed buildings, wares and even lives.

Speaking with journalists, the governorship hopeful said, “I was able to detect the cause of the accident by inspecting the accident site. The tanker driver was trying to negotiate through the road to avoid the bump built on it by the state government when it fell.

“ I am seriously asking the federal government to either build an end to end bump if they want to build one, or to scrap the ones at Upper Iweka because the tanker fell, trying to negotiate away from the bumps.”

Okonkwo who also suggested that complete fire fighting equipment be installed in all markets in Onitsha also donated an ambulance to the market.

He said, “I was at the hospital to see those who were hospitalised. The state government has accepted to pay their bills. I have also met with the leadership of the market and they told me that a lot of people have come and promised to provide one facility or another. So since there have been no mention of an ambulance in a market like this, I have told them that I will donate a modern ambulance to them.”

Though various individuals and state government, including the federal government have promised to help the victims get back on their feet again, the incident will for a very long time remain indelible in the memory of Anambra people.