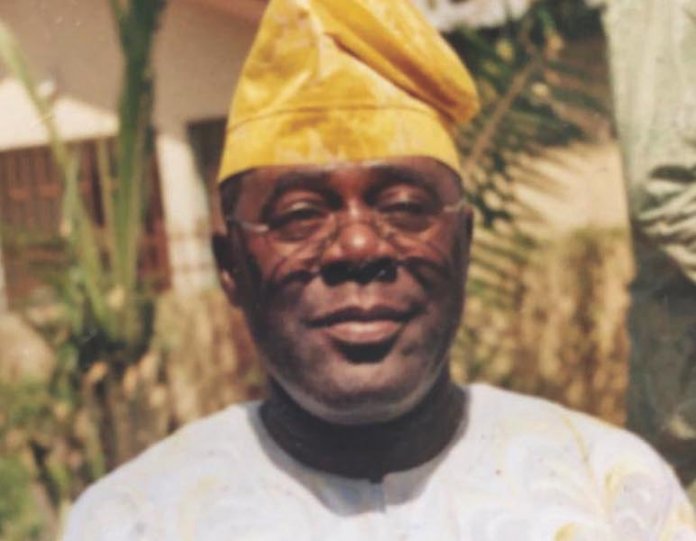 There exist a few tribe of men who after much struggle, by grace get blessed, then rather than frolicking in ostentatious living keep humble and become a blessing to fellow men.

Elder Michael Ojo Akerele who passed on Sunday 22, September 2019 at 73 is in the mould of such increasing rare tribe. A Christian leader who hailed from Iddo Ekiti in Ekiti State, he spent most of his adult life in the Somolu – Akoka axes of Lagos city. A husband and father of four – a lady and three men, he was popularly known as “Yamashita” the name of one of his companies or “Baba Kemi” – the customary Yoruba disposition to naming parents after their kids. Kemi his only daughter, is the first symbol of his strength.

Elder Akerele was an epitome of industry. He had a very humble beginning and was into several businesses to keep body and soul together and to raise his lovely family. He was enlisted into the Nigerian Army but exited early in pursuit of business. He was into Printing assistance, Printing and sales of Printing Papers. He was also into food produce trade, catering, bookshop operation and supplies.

His industry got rewarded when he became a registered contractor with the Nigerian National Petroleum Corporation to which he made several printing supplies and offered a myriad of general businesses.

Importantly, the late Elder Ojo Akerele was a great Christian testimony who practiced the tenets of the faith to letters and had great testimonials in relationship with fellow men. He won several lives to Christ through his generosity, counselling and listening ears. He readily offered to help the needy. He was solidly committed to comforting and giving. To put fillip to this commitment, he became entrenched in the Love Ministry, the welfare and caring ministry of Foursquare Gospel Church in Nigeria.

In church he spent about five decades in the children department. He took several children to church and had them imbibing the mind of Christ. Many of those children are responsible Christians as parents and responsible citizens, parents and professionals within and without the shores of Nigeria. He was well known for transporting the children to and fro church.

In church, he was known for his ready generousity and kindness. He would always be counted whenever it came to sacrificial giving, attending to welfare, meeting needs, giving counsels and being there for people in need. He was not a Pastor but stood to be counted as a true soldier of the cross. He was a peaceful and gentle soul. He was a man of peace. Never would you find him embroiled in arguments or quarrels. His well-known smiles which are customary with his children says much about his philosophical disposition to peace whatever the circumstance. Indeed, he lived a life patterned after the Christ of the Bible.

He was a debtribalised Nigerian. His home was home for people from different ethnic leanings in Nigeria. Efik, Ibo, Edo, Idoma, Hausas, Yoruba name it! They all felt at home. You would hardly leave his home without having a thing to bite or chew or a drink to take. To all he gave loving counsels and financial assistance as practically as he could. As at the time of his demise, in their empty nest circumstances, two young men were living with himself and his wife – Philip from the Republic of Benin and Timothy from Kaduna in Northern Nigeria. His practice was developing and enhancing the lives through schooling and or learning a trade.

An astute business man, he taught several people businesses and often lent a helping hand in setting up many in businesses.

He was modest to a fault. Although he often travelled to and fro United States of America, Canada and Great Britain, he avoided large living.  Rather than flaunting wealth, he chose investment in real estate and shareholding. His several disciples learnt and imbibed this interesting disposition to living and life philosophies.

He believed in education and saw to it that his children attended the great schools locally and internationally. He also sponsored and readily assisted in educating several young men and ladies.

Elder Akerele is survived by his loving wife, Mrs Adesola Akerele popularly called “Mama Kemi”, children and grandchildren. He will be missed by members of Foursquare Gospel Church, Somolu in Nigeria and across continents. They are all consoled by his rich Christian testimony and the hope of gliding heavens hereafter.

May his gentle loving soul rest in perfect peace.