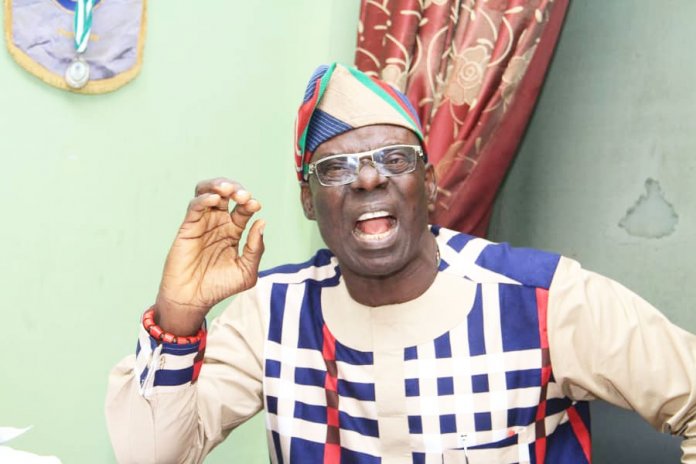 The Head of Department of Sports Management at the National Institute of Sports (NIS), Lagos, Dr. Francis Akinremi, has cried out over his missing official file at the institute which was last seen in 2014.

Speaking during a media chat in his office, Akinremi, who is a management member of NIS said his file had been missing since 2014 and he had made frantic effort at ensuring the file is produced, including dragging the institute to the erstwhile Minister of Sports, Solomon Dalung, but to no avail.

Akinremi, who is due to retire next year is of the opinion that the file  had been doctored might be produced to witch-hunt him after his retirement and is therefore bent on ensuring that the file was produced while he’s still in service, including taking the institute to court.

“On March 20th 2017, I forwarded an official letter through the NIS to the ex-Minister for Youth and Sports Development and I am still waiting for response to date,” he said.

The king elect of Ifetedo, in Osun State, expressed that his ordeal with the institute started while he was the Branch Chairman of the Academic Staff Union of Research Institution (ASURI), NIS Lagos in which he stood against the corruption that was being  perpetrated at the institute under the directorship of the Dr. OSA Ikhioya and had to be issued several unwarranted queries, faced a number of kangaroo panels, framed up, which led to his arrest and detained with criminals at Panti Police cell, Yaba, Lagos amongst many other harassments.

At the governing council meeting of the NIS on August 29th 2018 and March 22nd this year of which Akinremi received a copy of the outcome on August 14th, the council decided that a new official file be re-established for him and taken for certification respectively, which has since been carried out by the administration.

Akinremi’s grouse with the council’s position, however, is that he does not know the content in the new file.

“In as-much-as I agree that the file is government property, the content in it are mine and if my original file which I know is with somebody at the institute I’ll head to court,” he concluded.

When contacted over the matter, the Registrar, NIS, Mr. Adeneye M.A, said he was engaged, while the person that picked Dr. Ikhioya’s mobile phone claimed it was not the ex-director that was on the line.

It is not news that sports, especially football, globally, is one of the strongest factors in the bonding of the human community, and nations and with undoubted proof as a frontline driver in viable economies.

This phenomenon manifest, prominently during world or national sporting festivals, when every form of affiliation, divide or prejudice is completely ignored, even buried. For instance, in the last Mundial, held in Russia, a lot of people  fell in love with the Nigerian Super Eagles, because of the jersey which was regarded as the best, and most beautifully designed. The same was bought and worn by many people from across the world, who were in Moscow, for the World Cup.

In the strength of this, in a chat with the media, Dr. Austin Eruotor, President, Whitehouse Group, an ardent football enthusiast, founder Whitehouse Football Club, recently in Lagos, after an exhaustive facility tour of the Barca Academy Group, Nigeria, facilities in all the centers and Blaugrana Group International, new corporate office in Lekki, Lagos, commended the  selflessness and passionate patriotic approach of Blaugrana Group,  promoters of the Academy , not only in Nigeria, but the entire sub – Saharan Africa, strong quest and endurable zeal in changing the norms in the football sphere of the Nigerian sports industry.

He is convinced, that, like tourism, football is the new black gold, richer than the oil and gas sector, if fully and properly harness, articulately well administered, with solid structures, well-maintained facilities, that can attract high arcane global fiestas, backed with friendly and inviting government policies, continuous grassroots development and monitoring, without harsh government interference and politics, among others, the sector is viable enough to serve as a variable pillar of a sustained economy. Sector money would not be spent to clean the environment. Rather, add to the improvement of national health and wealth.

“As a tourism expert, having travelled the world, and attended many international football fiestas, I have personally seen that we are over-endowed with talents, and all we need to lead the black race if not the entire world,” Eruotor said.

Furthermore, he argued that the Barca Academy Group, Nigeria, was boldly in activities and programmes, changing the way things are being done in the sector in Nigeria in the process raising legends. Giving the youths the opportunities to be who they want to be, through scholarship.

In addition, he said, “We see sports legends like Pele, Mohammed Ali, Tiger Woods and the Williams, who aside the economic wealth they attract, they have also become a light to their individual countries. Thus, with sports, a lot can be achieved, from character molding, talent development, youth education, empowerment, and leadership training and creating of opportunities and many ideals and visions as a catalyst for all-round national reorientation and development.”

In his reaction, Leslie Oghomienor, chairman, Blaugrana Group, International , who openly appreciated huge tremendous contributions of all stakeholders, especially the pioneer students, their parents, the robust Nigerian Sports media, owners of various facilities, and the technical and support hands of the Academy, for their immense contributions, encouragement, motivation and support, which he agreed, has been his leadership driving force. And in light of this, he is bound to work harder in order to deliver, excellent and impeccable results.

“Without being economical with words, visits like his, with good-spirited words, spoken from the depth of one’s soul, spur us, and urge us on to do more in order to develop society and in the bid enjoy ourselves is a dream we all would ever live to cherish. We sincerely derived so much fulfillment and joy, in what we are doing.

And to us, wealth, no matter what form it comes to you, it is best enjoyed, when shared for the good of those, whom nothing would be gotten from in return,” he explained.

Oghomienor further revealed that the Academy has completed arrangements to introduce full-fledged training course and programme for children who are interested to be goalkeepers. A department that is facing serious drought the world over.