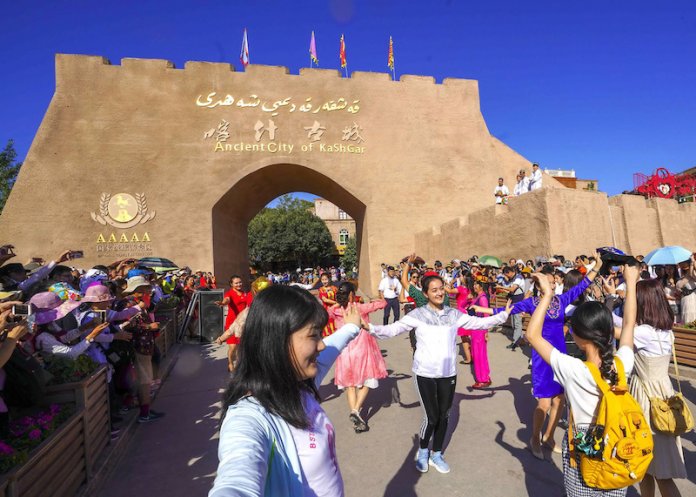 Six incidents of terror attacks in Xinjiang between 1992 and 2014 were enough signs to alert China that crises were in the offing in the vast land north western tip of the country.

Bombing first happened in 1992 in Urumqi, repeated in the same Xinjiang capital city in 1997 in a bus bombing incident.

In 2010, another bombing wrecked the peace in Aksu. Twice in 2011, the bombers struck in Hotan and Kashgar and they returned to Ürümqi in 2014.

At the repeated incidents, it was already clear that what was happening in the region were more than coincidences rather some design.

Because of the vast landmass of the region, China has borders with seven countries all around Xinjiang, and some of them are very volatile states with regards to extremism and terrorism including Afghanistan, Kazakhstan, Pakistan, India, Tajikistan, India and Russia. The predominant religion in the region is Islam which is also common in the nearby countries and therefore, skirmishes many times spill across borders into the region, thereby making Xinjiang a hotbed of terror incidents.

“On January 5, 2009, East Turkestan movement, both from inside and outside of China, started an extremely violent riot in Ürümqi that shook up the whole world. The terrorists staged major attacks in big stores and public places. The attack killed 197, injured more than 1,700 and destroyed 331 stores and burnt down 1,325 vehicles, many other public places were also damaged over the attacks”, the world media reported widely then.

After the 9/11 Al-Qaeda terror incident in the US, China joined international agencies in the fight against terror which yielded some dividends as the US and UN declared the volatile incidents in Xinjiang by mostly Uyghur separatist bodies as part of internationally recognized terrorism area and the masterminds as terror groups.

But the challenge and how China handles it in the zone has over time attracted diverse comments and reactions from the world although depending on interests. While those against China sneer that the government of China is highhanded about the approach, some others applaud it for adopting a very pragmatic approach in handling terrorism which is one of the worst security dangers the world faces in diverse forms.

In the Asia world, the Al-qaeda, the Talibans and some other groups prevail while in Africa there are Boko Haram that terrorizes Nigeria and parts of Cameroon and Niger, and later the ISWA. The deaths from Boko Haram in Nigeria since 2009 are in excess of 12,000 while millions are displaced and have lost their homes and means of living. Another terror group, Al-Shabbab makes life unbearable in East Africa, especially Kenya and the northern border countries.

So China pushing back the terrorism threats in the Xinjiang flanks becomes a big lesson for others on how effectively terrorism, especially at the cross border can be contained.

It was little wonder that at the last UN General Assembly in New York, USA, at the Security Council level, issues arose about China and the Xinjiang terrorism challenge.

As they argued that China’s de-radicalization was abuse of rights of some Uyghurs, Wang said a vehement no and corrected that the method has instead yielded huge dividends.

”Wang spoke about the preventive counterterrorism and deradicalization measures that China has been taking in western Xinjiang during a ministerial-level debate in the UN Security Council on cooperation between the UN and regional and sub-regional organizations in maintaining international peace and security.

Such practices represent useful explorations in preventive counterterrorism and concrete steps in implementing the UN Plan of Action to Prevent Violent Extremism,” he said.

Through the deracalization approach that come in form of re-education of the extremists and cleaning their minds of violent and sanguin religious views and inclinations, the government of China, Iran and Pakistan have reported over time that tension in the region has been effectively contained.

China says emphatically that the “government of Xinjiang has learned from other nations’ practices how to advance preventive counterterrorism and deradicalization work in accordance with the law.”

The Chinese FM also told the UNSC that “China has curbed the rampant and frequent terrorist activities in the region and safeguarded the basic rights of more than 25 million Xinjiang residents, including the right to subsistence and development.

Significant economic growth has been achieved in the region with people’s religious freedoms respected, Wang added.

The local economy has grown 80-fold since the establishment of the region around six decades ago.

The number of religious sites and clerical personnel also increased greatly during this time, and on the average there is a mosque for every 530 Muslims in Xinjiang, he said.

“A few Western countries, including the US, have been attacking and discrediting China’s just measures out of political motives with disregard to the facts. China firmly opposes this, and their slander will not gain any recognition from the international community.”

The US representative, Jonathan Cohen, voiced concerns over the Xinjiang issues during the UN debate.

The Chinese side rejected Cohen’s claims and urged the United States to stand with China in fighting terrorism in China.

“There must be no double standards or selectiveness in the fight against terrorism, Wang told the 15-nation council, and all terrorist activities must be resolutely challenged irrespective of who is behind them, when and where they take place or why they are initiated.

Counterterrorism measures shouldn’t be selective, nor should any party take advantage of terrorist forces to pursue geopolitical gains, he said. And terrorism shouldn’t be linked to any specific country, ethnicity or religion.”

While the need is urgent to strengthen international efforts in combating terrorism, all cooperative efforts should be conducted without politicization, he said. With cross-border cooperation a main theme in the debate, Wang underscored China’s pledge to participate further in the international fight against terrorism.

The UN is strengthening its cooperation with regional organizations such as the three who were present at the debate – the Shanghai Cooperation Organization, the Collective Security Treaty Organization and the Commonwealth of Independent States, Guterres said.

Wang also opposed the “clash of civilizations” rhetoric and advocated dialogue between civilizations. This was in line with China’s argument that US and others should not be out to fault China on terror war while they justify their own actions against international terrorism even in foreign countries.

Beyond the rhetoric at the UN Security Council and taking sides which is normal in diplomatic discussions for personal interests, the world needs to study the Chinese approach in the Xinjiang threat.

Nigeria for instance, has been a major casualty nation in the hands of terrorism and we need to also learn from China what makes their approach work and how the execution would be a sample to the world to tackle terrorism. The poor and struggling economy of Nigeria has been dealt a terrible blow in the past ten years where resources that would be channelled to the development of the country are diverted to contain terrorism. Till today, the crisis hasn’t abated.

Some other African countries like Mali, Algeria, Egypt and many more have lived under the endless threat of terrorism, and terrorism has in the past 30 years reduced Somalia to a totally failed state that exists only in name.

Africa especially and the rest of the should open their eyes to the China example, while the UN should also engage better, rather than allowing individual political proclivities becloud the good lessons that might be there in the Xinjiang approach against global terrorism.

This is also a call to China to closely monitor implementation of the process and ensure that the rights of law abiding individuals, especially the Uyghur ethnic citizens, are not infringed, while lives are protected and livelihood effectively sustained.