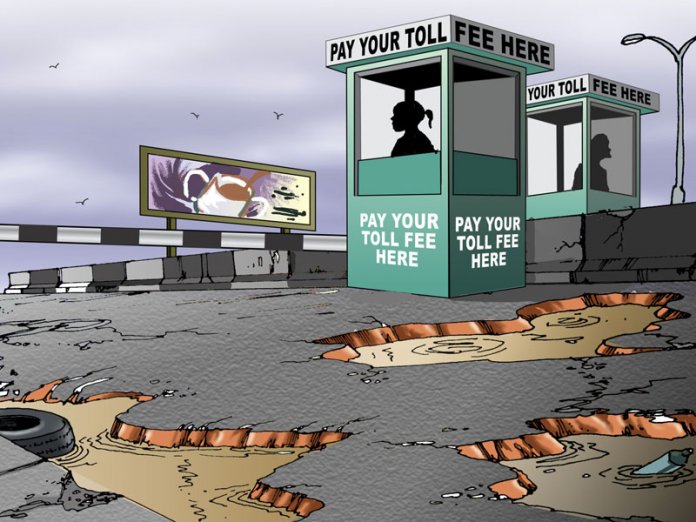 In a country whose government recently promised to take 100 million of its population out of poverty within the next 10 years, having functional roads are crucial. A good network of road infrastructure is a huge potential for catch-up growth and development. But the announcement on Wednesday of a plan for the return of tollgates on federal highways has been met with mixed reactions by a cross-section of Nigerians. While we have our reservations about whether this idea offers any practical solution, we have to examine it against the background that the rains have once again exposed the decrepit nature of roads across the country.

From Umuahia to Ikot Ekpene, Okene to Ekpoma, Benin to Warri, Onitsha to Enugu, Abuja to Minna to Zamfara and Sokoto, travelling through the federal highways has never been more perilous. Due to appalling road maintenance exercise, and even outright abandonment by the government, federal roads in the country are treacherous as many have become death-traps. Trips which should take few hours have become needlessly long and with the decline in security across the country, have become potentially dangerous.
That roads are important to the development of any economy is a given. With functional roads, farmers who have tilled the ground, planted crops and harvested them for consumption are able to move their produce from their farms to the markets. Similarly, people move to places offering services and satisfying demands of the society through roads. Without functional roads, these basic human endeavours which in many ways guarantee prosperity are lost.

Given the foregoing, we agree on the urgent need to upgrade and keep the roads in the country in order. But the idea of erecting tollgates that can easily be dismantled is just an easy decision that may not serve long-term goals. We need serious thinking and legislations on the way forward. There are several reports on road infrastructure funding practices of countries across the world that could serve as a model to adopt. For example, the United States has a fuel tax that is dedicated, at least in part, to the financing of road construction and maintenance. Countries such as Brazil, Canada, China, Israel, and South Africa equally place fuel and other excise taxes with general revenues to fund roads, while Japan used to dedicate fuel and vehicle taxes to road infrastructure but began placing such revenues into the general account in 2009.

Several of these countries rely heavily on private roads, concessions, or private-public partnerships as means of funding some of their road infrastructure. In Australia for example, some of its state governments have developed networks of toll roads in partnership with private-sector investors. Some of them have tolling systems to obtain part of their revenue for financing roads. And, in the case of Japan and France, they have linked their tolls with the weight of the vehicle and distance travelled. Similarly, in the Netherlands, tolls known as ‘mobility rates’ are collected for the use of roads as cars enter fee-payment gateways. Even in England, a congestion tax is imposed on vehicles that enter central London during certain hours, just as it is done in the cities of Stockholm and Gothenburg. While this tax is not specifically used for road maintenance, it is however purposed to shift the preferred means of transportation from cars to public transportation, and to pay for the environmental effects of motor vehicle use on the roads, thus preserving them from deteriorating quickly.

We have always argued on this page that sooner or later, Nigeria would have to find sustainable means of funding the roads, especially as revenue from traditional sources dry up and population increases. While we welcome the recent announcement by the Minister of Works and Housing, Mr. Babatunde Fashola that repair of some of the major roads would commence with the stop of the annual rainfalls, we also wish that the government finds a sustainable means of keeping our roads from breaking down completely into the mess they have become. Beyond that, erecting tolls on the highways in their present precarious state can only create chaos. That is why we need more strategic thinking on how to fund road infrastructure in Nigeria.

Quote
Several countries rely heavily on private roads, concessions, or private-public partnerships as means of funding some of their road infrastructure