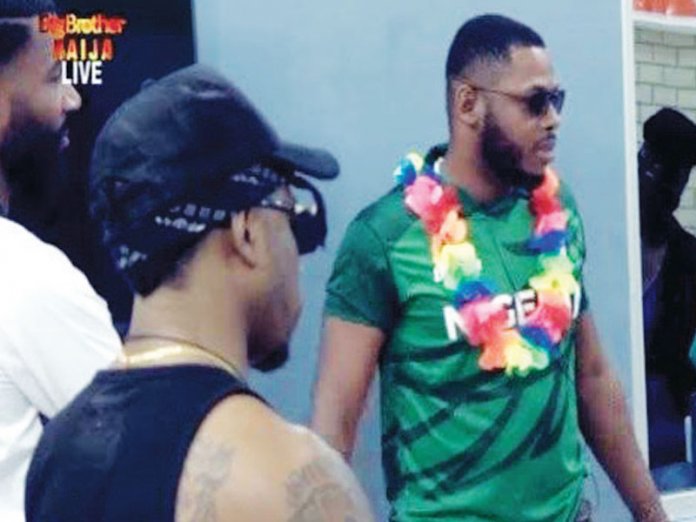 In the history of the Big Brother Naija Pepper Dem edition, this week’s nomination show will remain indelible. It was a very intense night with the twists and turns that came with the Ultimate Veto Power Holder. That fresh and odd guy Frodd emerged the winner of that title last Sunday Eviction Show, giving him the ultimate power to put any of the housemates up for possible eviction. Knowing Frodd and his emotional strategies, not a few stayed glued to their TV to find out whose survival he will be rocking with.

Predictably, he chose the five housemates who have stepped on his toe. Ike for not saving him when he got the chance, Elozonam for their constant clash, Tacha…well, her resilience and perhaps her peppery character, Cindy for also challenging him at one time, Mike, for the same reason. The only people who seemed to be in his good books were Omashola and Diane. Mercy escaped his wrath because she already purchased immunity with her Bet9ja coins. Seyi fortunately was the Head of House winner for the week, automatically saving him from nominations.

The Gods of Housemates

Frodd was filled with gratitude to the Most High when he emerged winner of UVPH. On Twitter, his fans relished the moment, claiming that his ‘God’ has lifted him above his enemies.

His choices also excited fans of Diane. They told anyone who cared to listen that the ‘God of Diane’ had kept her in the house till the final week. Their celebration irked a few social media users who couldn’t fathom how Diane, the young lady from Kaduna state has survived the game so far.

Since Frodd’s nominations, there’s been speculations on how many housemates will leave the house this weekend. Usually, five housemates are left in the final week to compete for the grand prize worth N60 million. Fans have been suggesting that perhaps the five nominees will leave the house on Sunday. Another group of BBNaija denizens speculate that two housemates with the least Bet9ja coins will exit the game on Saturday, while the remaining three will leave on Sunday.

If that should happen, then Tacha, the confident ‘No leave, no transfer’ contestant will be eating her words.

Nevertheless, fans of the housemates are not leaving anything to chance. They are campaigning vigorously for their favourite contestants to win the game. It is now a survival of the spiciest  housemate.

During the week, there were accusations by Tacha’s fans that a billboard erected to fetch votes for the lady from Port Harcourt was destroyed by the Mercy’s fans. A viral video online had some men specifically saying that ‘Owerri is for Mercy’ and Tacha’s fans should stick to Port Harcourt. But Mercy’s fans are claiming that the act is a ploy from Tacha’s camp to rub their idol’s name in the mud. Meanwhile, the fans are planning a massive campaign for Mercy and his beau Ike who is up for eviction at Maryland tomorrow.

Of the five nominees, Cindy and Elozonam seemed to have the lowest campaigns on social media. But anything can happen in the Big Brother Naija House.

Despite the eviction tension, it has also been a happy week for the contestants. They were asked to leave memories on the walls of the Big Brother Naija House. Some drew a painting, advertising their brands while others scribbled words. But what is graffiti without some fun. Elozonam, the grammarian in the house noticed Tacha’s wrong spelling of Port Harcourt and Daughter. He couldn’t keep his discovery to himself and shared with Seyi who clearly didn’t want a dose of Tacha’s drama.

One of the lovely moments in the house was when they were visited by some of the big names in the creative industry on Wednesday night. Like they partied last week with 2Baba, this week’s visitors were Nollywood actors like Patience Ozokwor, Mr. Ibu, Chinedu Ikedieze popularly known as Aki, Dakore Egbuson, Kemi ‘Lala’ Akindoju, Osas Ighodaro-Ajibade who is also a host and TV presenter, and fashion designer Mai Atafo. The housemates had a sumptuous dinner with the stars while they gleaned information on how to survive the creative industry.

For now, the housemates can revel in the fun and happiness of the week until Sunday when they know their fate.