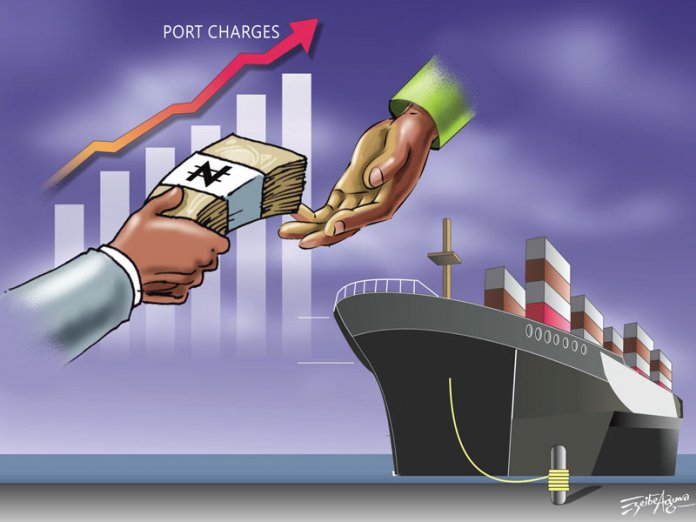 Apparently worried by the huge amount of money used in clearing goods at the ports, the Nigerian Shippers Council (NSC), on behalf of the federal government, will in the next two weeks sign a landmark agreement with shipping companies to reduce charges by 35 per cent or N258.38 billion yearly, THISDAY has learnt.

This development, it was learnt, followed almost two years of negotiations between the shipping companies and the NSC.

THISDAY findings from customs agents revealed that it takes about N6.5 million to clear and transport within the country a 20-foot container laden with cargo worth N36.42 million ($100,000) imported into Nigeria from China.

The cost of doing business in Nigeria ports ranks amongst the highest in the world with the ports notorious for high demurrage charges as a result of delay in cargo clearing process; high insurance premium of vessels coming to Nigeria and trucks conveying containers to and from the ports and higher shipping and terminal charges.
This is aside the total annual freight cost estimated at between $5 billion and $6 billion annually, according to the Ministry of Transportation.

According to the World Bank in its 2017 Annual Ease of Doing Business Report, Nigeria ranks 145 among 185 countries with Mauritius ranking 32 as the best in Africa.

From the report, Trading Across Borders, an indicator for measuring a country’s ports effectiveness ranked Nigeria low at 183 out of 185 countries.

However, when the 35 per cent (N258.38 billion) reduction comes into effect after the MoU is signed, the shipping companies’ charges will be reduced to about N479.77 billion annually,.

The Executive Secretary/Chief Executive Officer of the NSC, Hassan Bello, who confirmed the planned reduction of charges in an interview with THISDAY, said he was hopeful that the agreement would be signed.

Bello said: “You know in negotiation you can only be hopeful. We have been negotiating for one-and-a-half years. We have a small knotty problem which we hope to resolve by next week. So I am hopeful we will conclude with the shipping companies.

“However, we will run the agreed MoU by the Ministry of Transportation, major stakeholders such as shippers freight forwarders, Manufacturers Association of Nigeria (MAN) and Nigerian Association of Chambers of Commerce, Industry, Mines and Agriculture (NACCIMA). This will take four days; then we will sign the MoU.

“Further, the total reduction would be 35 per cent reduction but the most important thing is we have come up with sustainable mechanism of settling dispute, which means no arbitrary or unilateral fixing of cost at the ports.”
Besides the reduction of port charges, he said the council has also abolished the container cleaning fee hitherto being collected by shipping companies, just as 15 other port charges were removed from the list of charges.

According to him, the moment the MoU comes into effect, the implementation also becomes inevitable.

In his reaction, National President, of the National Council of Managing Directors of Licensed Customs Agents (NCMDLCA), Mr Lucky Amiwero, praised the federal government for the effort, adding, however, that 35 per cent reduction is not enough.

“What they have is just the container and that has been charged to the freight cost already. These charges are contestable and it is a very serious issue. The shipping companies are doing what they are doing because Nigerians don’t go to court, if Nigerians can go to court they will find out that the charges by the shipping companies are illegal.”

On his part, the Chairman of the Lagos State Shippers Association, Mr. Jonathan Nicol, said his group would resist the new charges if they fall below their expectations.

He said shipping companies must withdraw the court case they instituted against NSC resisting the council’s demand that they refund certain monies to some shippers.

The association also described the resort to the court by the shipping companies as an insult on the Nigerian government.