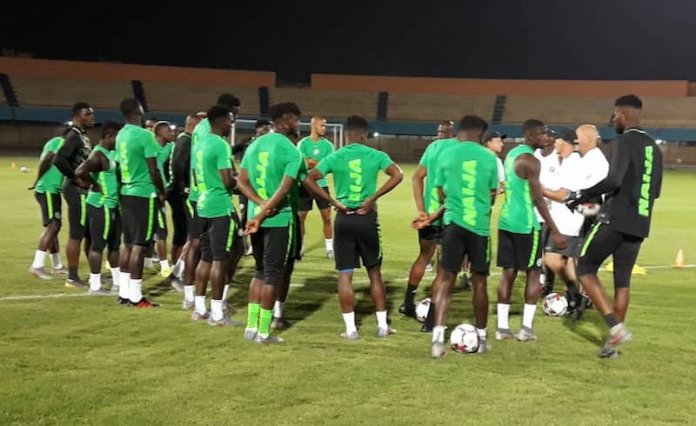 I have always loved my national football team now known as the Super Eagles but previously and variously known as the Green Eagles and the Red Devils. Why not? Isn’t that what true patriots should do? As a growing boy, I always hoped I would one day play for my country and would make her football team unbeatable.

To do this, I had imagined I would go to India and procure a talisman which when I wore it would make it impossible to score against me. I had imagined that would make us beat any team. We would then perpetually become Word Champions. I watched (actually listened to radio commentaries about them is more appropriate) Olu Onagoruwa, Godwin Ezekwe, Lati Gomez, Lawal Inua Rigogo etc keep goal for our country. But I never managed to get far with goalkeeping. While I was at the University of Ile-Ife, Isaac Akioye who was our Director of Sport/football coach told me I would always play third fiddle to Ricky Manuwa and Michael Iyayi who were both six footers as against my 5.8ft.

But today, I am not going to talk about my truncated dream. Suffice it to say Ife was my last bus stop as a football player! Now as a retired father and an active grandpa, my realities are different. I can only play football in my dreams. And watch football matches on television. The Super Eagles draw my unalloyed support. I still look around for Shooting Stars Sports Club (3SC) and wonder if it will ever get Governor Seyi Makinde’s attention. I remember Stationery Stores FC and the promise it held. But now, it is Arsenal Football Club that rules my passion.

Interestingly, my interest in the London club was kindled when Nwankwo Kanu joined them. Since then, I have remained a loyal fan of the club so much so that when one of my sons asked what present I would like for my 70th birthday (which incidentally is still some few years away), I told him I would want to watch Arsenal beat Manchester United or Chelsea at the Emirates Stadium with him! I have enjoyed watching the team play the most exhilarating football, seen them through the highs and lows. And also received some irreverent bashing from envious haters of the club when our players open the door for criticism. I know nothing can make me leave the club.

But last weekend would have seen me suspend my support for Arsenal Football Club if they had not squeezed that win over Aston Villa. On Saturday was my son’s birthday and Sunday was my younger brother’s engagement party. We all expected Arsenal to win for us and for 90 agonizing minutes, it was not going to happen! Pierre-Emerick Aubameyang’s third goal was not going to matter until the final whistle when we can confirm we have won the match. Fortunately we didn’t need more than Auba’s marvelously taken free-kick to eventually see off the robust Aston Villa squad and start a celebration which was more profound because Arsenal won.

Why was it important we won? For some time now, the Gunners have been underachieving. Since we have not won the most important football trophy in England – the EPL Cup. The solace we had in being a top four team stopped three years ago. Almost everyone felt Arsene Wenger had to go. He went. A new gaffer was employed. And despite a huge clearance sale and some fairly decent buys, it does look we are not moving forward. On the contrary, our defence which was our weakness under Wenger, became even weaker. After six matches in the League, we have conceded ten goals joining Bournemouth as the two teams in the current Top Ten to be the ‘leakiest’. Suddenly, calls for the sack of Unai Emery are building up from quiet whispers to loud murmur. Amongst fans, it is becoming increasingly difficult to believe Emery is the solution to our problems. Some like Ayo Daniel a friend of mine in Leicester City have jumped ship because no one seems to understand the ‘playing from behind ‘ system that keeps leaking goals. With the buys the team made this season the expectations are high – go as far as possible in the Premiership, secure at least a Top Four finish and win a trophy or two. After the 2-2 draws with Tottenham Hotspur and lowly Watford, it became difficult not to expect anything from victory against Villa…

What then is the prognosis for our team? If Emery gets to work and uses the right players and strategy in upcoming games with Manchester United, Bournemouth, Sheffield United and Crystal Palace, this should see us closer to the top of the log not lower than the third spot. Would it happen? A lot depends on Emery. Our team is not about his ego. It is about occupying our rightful place in English football.

Those of us who follow Arsenal know that our club has a culture that is unique to it. One of its most alluring qualities is that which encourages the feeling that football can be played beautifully. When we play we want to see our team play with panache, class and elegance. All these are legacies of our Professor – Arsene Wenger who moved English football from the ‘kick, push and follow’ to the highly entertaining type played by Arsenal. We love our team and continuously want to see it retain its value of playing football with flair and decency. When there is a deviation, we bash the handlers. We continuously seek a balance between playing good football and winning decently.