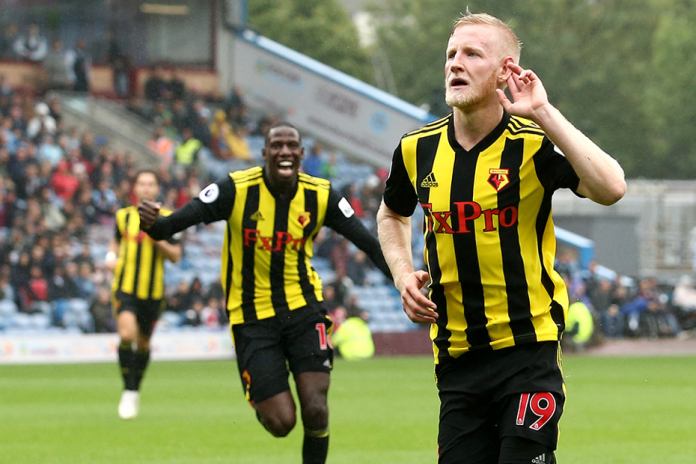 A Watford side brimming with attacking intent fought back from two goals down at half-time to draw at home to Arsenal in Quique Sanchez Flores’ first match since being reappointed Hornets manager.

The hosts fired in 31 shots – a club-record for a Premier League game – as Arsenal’s shaky defence finally cracked after the break.

Watford levelled the scores when Roberto Pereyra rolled in a late penalty to secure only their second point of the season.

Tom Cleverley had earlier reduced the deficit when Gunners defender Sokratis Papastathopoulos gave away possession inside his own area,

Pierre-Emerick Aubameyang put the visitors in front when he collected Sead Kolasinac’s pass on the turn before firing past Ben Foster.

Arsenal doubled their lead as Aubemeyang finished a sweeping team move but the hosts improved after the break as the Gunners unravelled in front of the vociferous home support.

The Hornets had their chances to complete a stunning comeback with a decisive third, but the otherwise impressive Gerard Deulofeu dragged his effort narrowly wide.

The result sees Arsenal move into seventh, while the Hornets remain rooted to the bottom.

The Arsenal striker Aubemeyang is one of the most clinical forwards in the English top flight, having scored with seven of his last nine shots on target, and the Gunners are quite capable of blowing teams away going forward thanks to the potency of Aubameyang and the technical ability of Mesut Ozil and Dani Ceballos.

They demonstrated their attacking flair as they went through 20 passes for their second goal – but glaring issues remain at the back.

This was evident as early as the 10th minute as the red and white shirts backed off and space opened up for Cleverley, whose fierce effort was well saved by Bernd Leno.

Five minutes later, and Etienne Capoue was given the same time and space but could only shoot over the bar.

The Gunners want to play out from the back, and even though Matteo Guendouzi lost possession deep inside his own half on two occasions they persisted with their approach.

It was Sokratis who eventually made the mistake that always looked likely to happen, before Deulofeu diverted the ball into Cleverley’s path for Watford’s first goal.

David Luiz was brought in from London rivals Chelsea to shore up the defence over the summer, but the Brazilian has endured a difficult few weeks at the start of his Arsenal career, and has now conceded two penalties in three matches.

Luiz brought down Pereyra with a lunge in the final 10 minutes and the substitute stepped up himself to take the penalty and salvage a point for the hosts.