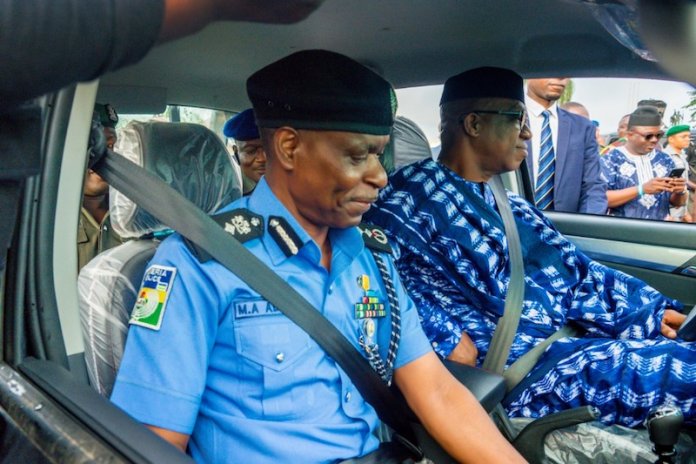 As pretenders and contenders for genuinely impactful governance, especially first-term governors strut the political space, often claiming unearned plaudits, Louis Achi assesses Governor Dapo Abiodun of Ogun State’s first 100 days in the saddle and writes that the unassuming ‘dark horse’ has served specific notice of a new direction for the Gateway State and indicated that vision and discipline are essential ingredients with which to positively change the Ogun State story

In reality, the first 100 days of a governor’s tenure is equal to about three per cent of a possible two-term, eight-year regime span. But interestingly, for decades, the opening stretch of an administration has become the barometer for measuring a state chief executive’s governance capability and direction, or lack of it. But the ‘quirky’ concept has apparently come to stay – fuelled by a feisty media eager for a measuring yardstick with which to assess or knock an executive in power.

Taking a big-picture view of a task before setting sail is a defining feature of uncommon leadership. That was what Governor Dapo Abiodun, the fifth democratically elected chief executive of the state did on assuming power in Ogun. These governance imperatives were captured in his vision statement: “To give Ogun State focused and qualitative governance and to create the enabling environment for a public private sector partnership, which we consider as fundamental to the creation of an enduring economic development and individual prosperity of the people of Ogun.”
Governor Abiodun declined to throw tantrums over the challenges, including the huge debt profile his government inherited from the previous administration, refusing to toe the line of traditional politicians who have made that their first act.

His first 100 days in office represented a deliberate phase of gathering and analysing specific information targeted at addressing the infrastructure deficit, declining quality of education, low morale among public servants as well as general welfare of the citizenry.

With an array of stars engaged to manage the strategic sectors of the state’s economy, including Mrs. Noimot Salako-Oyedele (a civil engineer by profession), the Deputy-Governor; Mr. Tokunbo Talabi, Secretary to the State Government; Alhaji Shuaib Salisu, Chief of Staff; Mr. Dapo Okubadejo, Chief Economic Adviser; a whiz-kid and promoter of Jobberman, Mr. Kunle Olude, Special Adviser on Job Creation and a host of other seasoned technocrats, the task of, “Building Our Future Together”, as Governor Abiodun succinctly put it, has thus begun in earnest.

Deploying a crystal-clear vision grounded in commitment to service, the focus of the administration encapsulates both the enablers and pillars. These include good governance, security, ICT/Digital transformation, enabling business environment, agriculture and food security, health, education, power, housing, sports development, road infrastructure, environmental and physical planning, among others.

In concert, these represent the driving forces for effective, efficient and smooth service delivery. Reminiscent of his inaugural speech delivered at the MKO Abiola International Stadium, Kuto, Abeokuta, the state capital, on May 29, 2019, Governor Abiodun succinctly put the focus of his administration: “In our determination to achieve this vision and hit the ground running, we set up Economic Transition Committee of eminent sons and daughters of Ogun State and Work Groups to develop a blueprint and an Implementation Road map. The Work Groups held a series of engagements with stakeholders in the state, including but not limited to development partners and multilateral organisations”.

The governor also intimated his constituency with his vision to reposition the civil service as an efficient organ of government. He minced no word about his resolve to address the anomalies of the appointments of 18 permanent secretaries and recruitment of 2,000 staff into the civil service by the immediate past administration on the eve of its departure.
His promise was immediately matched with legislative imprimatur of the State Assembly, which reversed the appointments and classified them as actions taken in bad faith and without due process. This move has been appraised by many as good for the morale of the service as most of such appointments were politically motivated and could manifest as a landmine to sabotage the incumbent governor.

Significantly, the proximity of Ogun State in the South-West geo-political zone, to Africa’s 5th largest economy, Lagos, provides a significant development push factor for the state, a scenario that needs a nimble governor with vision to transform the Gateway State with. Providentially, an unassuming ‘dark horse’ has emerged to change the Ogun State story. From his talk and walk, Governor Dapo Abiodun is certainly not taking his weighty responsibility lightly.
He succinctly captured a deep awareness of the possibilities of positively changing the Ogun State narrative, at a maiden parley with both the civil and public servants held shortly after his assumption of office.

His words: “We intend to ensure that going forward, we focus on creating that enabling environment for people to come here and invest in the state. Before you come here to invest in the state, you will want to see electricity, good roads, security and others. All these are the things that anyone coming to invest in Ogun State will want to see. We have also decided that we are going to have an improved and indeed an Ogun State Investment Promotion Agency that will be headed by an investment banker, not just someone who doesn’t have what it takes to bring investment into the state.

I strongly believe that strategic positioning and close proximity to Lagos can also be maximised to our greatest advantage where we can easily generate as much internal revenue as Lagos State, if the opportunities are properly harnessed”, said the governor at a recent stakeholders’ meeting.

Wasting no time, Governor Abiodun inaugurated a “committee on the review of appointments and promotions in the state civil service and enterprises between February 1 and May 20, 2019, a development which is aimed at repositioning both the civil and public services for effective and efficient service delivery. The committee is chaired by Mr Dipo Odulate, an erstwhile Head of Service.
Immediately confronted with challenges of irregular salary payment and leave bonuses, defrayment of the outstanding deductions, partial and selective promotion exercises among the cadres, the dichotomy between HND and bachelor degree holders, among others, the governor began to address all the issues, promising to live up to expectations with the regular payment of salaries.

At press time, 10 months’ pension arrears have been paid, while workers have equally enjoyed the same treatment of regular payment of their salaries. The new administration has also offset salary arrears, and remitted deductions to the Pension Funds Administrators.
In consonance with its commitment to prudence and frugality, the new administration has also reduced leakages. As a result, the government has been able to save nothing less than N2.5bn monthly in excess of what the immediate-past administration claimed it incurred.

Others include the construction of Opako bridge at Adigbe, Abeokuta, culverts and gutters in certain parts of the ancient Ijebu-Ode community ravaged by the recent flood disaster. Through a joint collaborative effort, the governors of Ogun and Lagos states have received the blessing of the Presidency to undertake the rehabilitation of the Lagos/Sango/Abeokuta dual carriage ways (undertaken, but abandoned in 2001) and the Sagamu/Ogijo/Ikorodu road to serve as alternative routes and also ease the traffic congestions often occasioned along the Lagos/Ibadan Expressway.

Of course not to be forgotten, in the education sector, primary schools located in each of the 236 wards have undergone rehabilitation to enhance the environment conducive to learning. The governor has also restored normalcy in the protracted crisis that engulfed the state-owned Moshood Abiola Polytechnic, Ojere, Abeokuta. For well over two years, the institution had been enmeshed in a crisis over the attempt by the last administration to convert it into a university and the subsequent relocation of the students to Ipokia.

The same exploit is equally being replicated in the state-owned Tai Solarin College of Education, Omu-Ijebu, where a committee has been inaugurated to investigate the crisis rocking the institution.
On the critical health front, rehabilitation works have commenced in earnest in each of the primary healthcare centres spread across the 236 wards in the state.

Well aware that the devil provides work for idle hands, Governor Abiodun has moved to empower the youth through job creation. The state government has opened a portal to help prospective applicants seeking employments, be it in the formal or informal sector of the economy. The logic here is to take stock of the data base of unemployed youths in the state and to also afford them an opportunity to load vacancies free of charge. So far, no fewer than 75,000 prospective applicants have registered through the job portal.

On the agricultural front, the state government through the “Ogun State Anchor Borrowers’ Scheme” has inaugurated a committee headed by Prof Peter Okunneye to oversee a programme designed to enhance self-sufficiency in food security, employment generation and poverty alleviation. The primary target of the scheme is to produce enough food to attain self-sufficiency both in the short and long-term.

Governor Abiodun has also continuously engaged regional and international development institutions in his quest to get them to commit to strategic partnership and critical assistance. The World Bank, for instance, has promised to partner with the state government on a number of social intervention and socio-economic programmes. This was disclosed in Abuja on July 31, when Governor Abiodun and his aides met with a team of country representatives of the World Bank, led by the Country Director, Rachid Benmessaoud.

The latter, while granting the governor’s request for assistance, stated that Ogun State had been included as a beneficiary of a $900m ecological intervention fund. And in relation to the agriculture drive of his administration, Abiodun has held fruitful talks with the African Development Bank (AfDB). The initiative has given birth to a proposal to develop a 300-hectare farmland in Ogun State.

Abiodun’s administration has also commenced efforts to establish a dry port around Itori in Ewekoro Local Government Area of the state. He announced this recently in his office at Oke-Mosan, Abeokuta during a courtesy visit by a team from the African Development Bank (AfDB), led by the Senior Special Adviser to the President, Prof. Oyebanjo Oyelaran-Oyeyinka.

editor - January 17, 2021 3:00 am
0
THE ALTERNATIVE With Reno Omokri As a result of the threats that have been made by certain persons against Matthew Hassan Kukah, the Catholic Bishop...