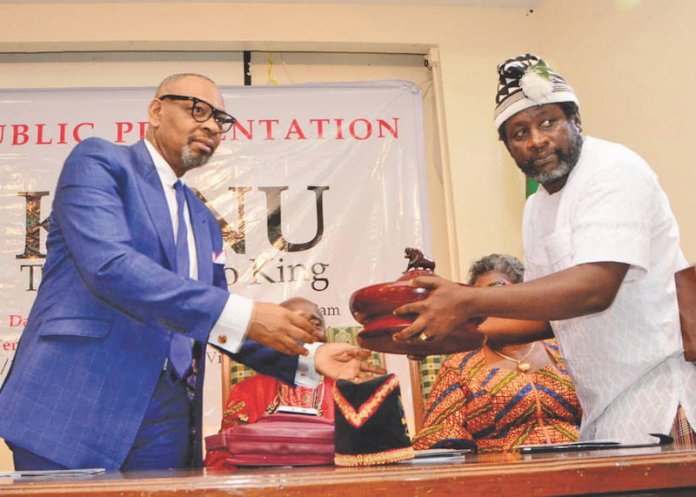 The lecture theatre of the Nigerian Institute for International Affairs, NIIA, Kofo Abayomi Street, Victoria Island, Lagos, witnessed an unusual gathering of political, economic and social opinion leaders on Friday, September 6, for the public presentation of the book, Kanu: The Last Aro King.

Kanu: The Last Aro King is an exciting historical and cultural novel authored by Ernie Onwumere and published by the reputable Ibadan based Kraft Books Limited with a foreword written by Professor Okoro Ijoma.

The public presentation of the book was anchored by Ogbonnia Okereke under the chairmanship of Chief Ben Okoye, Chairman DSV Group. The presentation was done by Uche Orji, the Managing Director, Nigeria Sovereign Investment Authority while Prof Ngozi Osarenren of the University of Lagos was the book reviewer. The Minister for Mines and Steel Development, Dr Uchechukwu Ogah was represented by Kelechi Ekugo.

Professor Ngozi Osarenren, the reviewer, took the audience through the 14 chapters of the book and threw more light on its rich cultural and historical content commending the author for the telling the story in a compelling and easy to read manner. She concluded her review by recommending Kanu: The last Aro king without reservations to all those who sincerely seek the deep knowledge of the Aro people and their culture.

According to the author of the book, Ernie Onwumere, Kanu: The Last Aro King is a historical fictional representation of an epochal phase in the history of ancient Arochukwu Kingdom and he needed to document most of them for the future generation. He said that the next stage of the book will be for it to be turned into a movie and he is already working with renowned movie producers in that direction.

The representative of the Executive secretary, National Institute for cultural orientation commended the author as a worthy ambassador and for his ability to utilize his training at the institute.

High points of the event were the rendition of Aro National Anthem, the traditional presentation of kola nut to different individuals and groups, the official unveiling of the book and appreciation of the author by dignitaries present and represented, a cultural performance by FAYA Lagos group and comments from the audience.