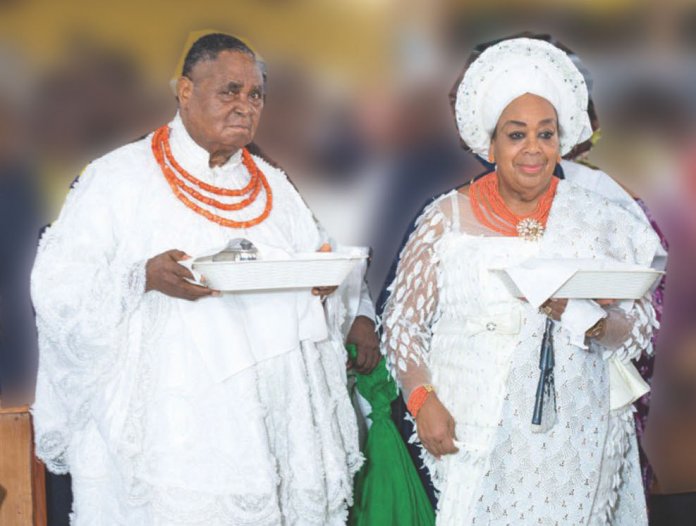 The Esama of Benin Kingdom, Chief Gabriel Osawaru Igbinedion was 85 last Sunday. The billionaire businessman shut down Benin while the celebration lasted, with the likes of former president Olusegun Obasanjo and Goodluck Jonathan turning up to party with the icon. Ferdinand Ekechukwu reports

Another wonderful session of thanksgiving and immense gratitude was witnessed last Sunday in the ancient city of Benin, Edo State, as the fabled Esama of Benin Kingdom, Chief Gabriel Osawaru Igbinedion celebrated his 85 birthday. The event which took place at the Saint Gabriel the Archangel Catholic Church was graced by people from all walks of life.

The thanksgiving mass and festivity of the 85 birthday of the Esama of Benin was held amidst funfair, setting agog the ancient city of Benin with celebration and fecundity befitting of the revered Esama. As has been the tradition for decades, the week-long celebration began with courtesy visits but hit a high tempo with the service of praise and thanksgiving and was blessed by the presence of men of God from far and wide.

Delivering the homily, entitled: “Gratitude and Thanksgiving: A fulfillment of God’s will”, Rev. Father Alfred Agbonlahor, charged the congregation to take thanksgiving, a moral obligation of Christians, seriously in order to attract God’s blessings. The priest cited relevant sections of the Bible on gratitude, including, Luke Chapter 17: verses 11-19, when Jesus, on his way to Jerusalem, encountered 10 lepers, healed them, but only one returned to thank him afterward.

He described the celebrant as a man after God’s heart and a distinguished entrepreneur who has contributed immensely to human capital development in Edo in particular and Nigeria at large. Father Agbonlahor said: “He is a dogged man who does not give up in the face of daunting challenges in life. If there is no investment, there is no future. You have diversified your investment; even before we were born, you raised many people through your act of generosity.”

That was not all. An evidence of Esama’s immense impact on the lives of people was the fact that hundreds turned out at his palatial home on this special occasion of his birthday soiree to honour the high chief, which was reflective of the title Esama which traditionally means the “son of the people”.

The family had referred to the patriarch of the House of Igbinedion as an oak and a legendary octogenarian. There is no gainsaying the fact that he had stood the test of time, touched many lives and put smiles on many faces.

On this historic occasion of his 85 birthday celebration, President Muhammadu Buhari felicitated with the Esama. The President saluted Igbinedion’s high sense of patriotism, love for humanity and dedication to helping the poor and underprivileged. Buhari noted, with pride, Esama’s contributions to the nation’s development as a serial entrepreneur who finds joy in investing in sectors that directly impact the livelihood of Nigerians, including education, health, transportation and the media.

The Esama of Benin’s business empire includes an international property portfolio and a private TV and radio station. He owns diamond, gold, marble mines over Africa, a private university (Igbinedion University, the first private university in Nigeria) and a large number of hotels. There is no denying the fact that Igbinedion’s foray into university education was never a fluke. For one who ventured into montessori, primary and secondary education in the 1980s, the progression to university level was seen as natural and predictable.

He previously owned the now-defunct airline, Okada Air. He has built numerous churches including a Grand Catholic Cathedral,  has set up and owns a number of private hospitals across Nigeria.

The strength and apparent economic immortality of the Esama lies in his real estate spread. This is so much so that he owns property in almost every major city in the world. The living legend and icon of entrepreneurial endeavours Chief Gabriel Osawaru Igbinedion, CFR, aka the Lion of Okada/Esama of the Universe, was born in the year 1934 in the obscure farming community of Okada, now a university town and headquarters of Ovia North-East Local Government Area of Edo State of Nigeria.

In the course of his illustrious journey through life, he has garnered over 60 titles, awards and honours from various bodies and authorities. His title, Esama of Benin Kingdom, positions him as a prominent chief among the Eghavbo N’Ore Palace Society and 5th in rank in the Benin Chieftaincy hierarchy. He was honoured and invested a Commander of the Order of the Niger (CON) by the federal government on the historic occasion of his 70th birthday in 2004.

Igbinedion is a Grand Commander of the Knights of the Order of St. Benedict (GCKB). He is the Honorary Consul of the Republic of Romania for Edo and Delta States of Nigeria. In December 2010, he received the Lifetime Achievement Award in African Chieftaincy Institutions from Ghana and also bagged an honorary Doctorate Degree in law from the Kwame Nkrumah University of Technology, Kumasi, Ghana in November, 2011. Between 1988 and 1991, he bagged honorary Doctorate Degrees in Philosophy from Rust College, Holy Springs, Mississippi, Jackson State University, Mississippi and Oral Roberts University, Tulsa Oklahoma, all in the U.S.A.

He is a proud recipient of the key to the City of Holly Springs, U.S.A. and the Key to the City of Montego Bay, Jamaica. Early in 2012, he received along with four other eminent Nigerians, the Zik’s Prize for Leadership in Africa. Chief lgbinedion is an honorary Rotarian and a Five-Star Paul Harris Fellow. He has been honoured with Honorary Doctorate Degrees by not less than eight Nigerian Universities among which are; University of Benin, University of Nigeria, Nsukka, Imo State University, Okigwe, University of Port-Harcourt, Rivers State, University of Calabar, Cross River State, Ambrose Alli University, Ekpoma, Edo State and several other academic institutions and professional bodies.

Two former presidents, Chief Olusegun Obasanjo and Goodluck Jonathan were among dignitaries who attended the 85th birthday thanksgiving service. The Benin Monarch, Oba Ewuare II, was duly represented by Chief Eduwu Ekhator (the Obasogie of Benin) and Chief H. Bazuaye (the Aiwerioghene of Benin) was accompanied by Chief Sam Igbe, the Iyase (Prime Minister of Benin) at the event.