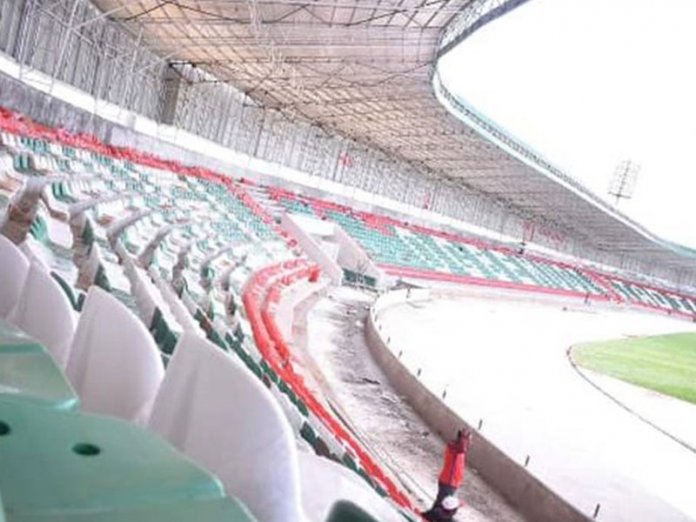 The contracting firm handling the reconstruction of the Samuel Ogbemudia Stadium, Benin, has rated the facility as one of the best in the country.

Femi James, Site Engineer for Peculiar Ultimate Consult, the firm handling the reconstruction, stressed that the Samuel Ogbemudia Stadium will rate next to the Nest of Champions Stadium in Uyo and the Moshood Abiola National Stadium in Abuja when fully completed.

Speaking when he conducted sports journalists on tour of the stadium yesterday, the site engineer confirmed that the stadium which will be installed with modern sporting facilities as part of the reconstruction work, has attained 85 per cent completion.

Noting that preparation for the laying of tartan tracks have been concluded with the casting of the surface, James said the contractors were only awaiting the arrival of the tracks from Germany.

According to him, the mainbowl of the stadium will boast of the FIFA required facilities such as Surveillance Monitor and Standard Studio that will make it easier to relay live matches across the world.

“As you can see, a whole lot of work have been achieved; while various fittings are currently being installed with others completed, installation of seats is also being completed.

“This stadium which is about the best in the country, will be fitted with surveillance monitor 5km radius and also a studio facilities. It will be about the only stadium in the country with these facilities, the stadium will only be compared to that in Uyo and Abuja when completed.

“As for the tracks, we are done with the ground work and only awaits the arrival of the facility which payment have been made from Germany,” he declared.

James said aside the tracks, ordered and payment have been made for the floodlights and the scoreboard.

“Though, we have already installed lights inside the covered stand and also installed that shadow casting lights, we are only awaiting the arrival of the aforementioned light for installation.”

Similarly, the site engineer gave progress of work in the swimming pool and that of the lawn tennis courts to be between 50 to 55 per cent.