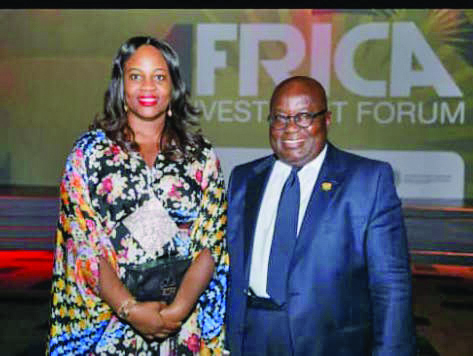 For the former Director-General (DG) of the National Pension Commission (PenCom), Mrs. Chinelo Anohu-Amazu, it is another moment in the sun and call to higher duty as she is appointed the Head of African Development Bank Group’s flagship initiative, the African Investment Forum. Given her trailblazing legacies, which won her and PenCom local and international acclaims, I had predicted that she was built for loftier height. My projection was predicated on the grounds that the gold fish has no hiding place.

True to my predictions, the world continues to beckon on her to tap into her rich repository of knowledge, experience, and contact. Today, she is not only a member of the prestigious London Stock Exchange (LSE) Africa Advisory Board, she was also appointed into the International Advisory Board of the esteemed University of Edinburgh Business School. She has been associated with many international bodies and engagements, and was present with the who-is-who, including Heads of State, business moguls, and investors at the maiden Africa Investment Forum (AIF) in Johannesburg last year to chart a trajectory for Africa’s development through investments. She spoke eloquently and shone like a million stars on the panel that dealt with pension. So, it was not totally surprising when the eagle finally landed at the African Development Bank Group (AfDBG) as the brilliant President of AfDBG, Dr. Akinwumi Adesina, gladly announced Chinelo Anohu-Amazu’s appointment as the Head of the Bank’s flagship investment arm, the AIF.

“I am delighted that Chinelo Anohu is joining us as the Head and Senior Director of the Africa Investment Forum. Her can-do-attitude, leadership, hands-on experience in working with global pension funds and institutional investors, and extensive global networks among institutional investors, will significantly position and help the Africa Investment Forum to drive its global agenda to attract more investments to Africa”, Dr. Akinwumi said about her appointment.

What is AIF and why does the appointment of an accomplished achiever of Anohu-Amazu’s calibre at its helms matter? The AIF has become Africa’s premier multi-stakeholder transactional platform for leveraging investments from the private sector, African and global financial institutions, global pension funds and sovereign wealth funds and other institutional investors. The AIF, which was launched in 2018, also provides an unparalleled platform for engagements with African Heads of State and Governments to discuss, in the Forum’s unique “Investment Board Rooms”, policy, business and investment incentives to close transactions in real time.

The Bank attracted a whooping USD39 billion in investment interests for bankable deals in Africa after the maiden AIF in Johannesburg last year. That maiden outing alone attracted 1,943 participants from 87 countries, among them Presidents of South Africa, Ethiopia, Ghana, Nigeria, Cameroun, Senegal, Guinea, and Rwanda. Also, 277 Direct Foreign Investments (DFI) were present, while 169 official bilateral meetings were held and 63 deals discussed. So, AIF is of key import to Africa’s quest to emerge from a continent of poor, aids-seeking countries to a prosperous continent living the dreams of the founding fathers.

President Cyril Ramaphosa of South Africa, while speaking at the maiden edition, rightly described the AIF as “a significant milestone in our quest to reshape the fortunes of the African continent”. Also speaking at the maiden edition, the President/CEO of Dangote Group and Africa’s richest man, Alhaji Aliko Dangote, confessed that “we have never seen a quality crowd like this ever”.

The AIF is also about changing the perceptions and narratives about the continent. The President of the Bank, Dr. Akinwumi, highlighted the impact of AIF on changing the African narratives when he asserted that “We must reduce perception risk, we must brand the Africa market better”.

Furthermore, it is also about harnessing Africa’s talents in various fields of human endeavour. Of Africa’s sporting talents, for instance, President of the Toronto Raptors, Masai Ujiri, told the maiden AIF:  “The talent walks around like its normal. You take Senegal, for instance, you go there, and you see all these tall human beings in Sudan and in Mali. You go to Cameroon, Congo and Nigeria, all the talent in football, all the runners in Kenya, all these things are over-looked because we don’t pay attention to it because we think it’s normal”.

It is also about highlighting government’s role and ensuring that they are at their best in discharging those responsibilities to attract and retain investments to Africa. President Akufo-Addo of Ghana clearly pointed out that “The role of government, in our view, is to be a facilitator for the development of the private sector”.

The Bank gets set for the 2019 edition of the AIF in Johannesburg, from 11-13 November. However, AIF extends beyond the two day-day event. Curating projects, ensuring that they are bankable, matching them with investors, tracking those investments, and guaranteeing corporate governance to build investors’ confidence is a huge and ongoing task. It was therefore only natural and reasonable to headhunt a formidable go-getter and talented leader in the mold of Chinelo to drive and further institutionalise the AIF.

Mrs. Anohu-Amazu graduated in 1996 with a Bachelor of Law from the University of Nigeria, Nsukka, and a Master’s degree in Computer and Communications Law from the London School of Economics in 2000. She has also studied at the Kennedy School of Government, Harvard University, USA and the Insead Business School, France.

She began her professional career as a lawyer with the global oil conglomerate, Chevron, Nigeria. She worked in legal and financial services firms in Nigeria and the United Kingdom before joining the Nigerian Bureau of Public Enterprises, the implementation agency for the reform and privatization of state-owned enterprises.

As a consultant assigned by the United States Agency for International Development (USAID), she helped to restructure and privatise the Nigerian Telecommunications Limited, Nicon Hilton Hotel, and AfriBank, among several others. An adroit and sound negotiator, Anohu-Amazu successfully worked with acquiring entities, liaising and managing complex relationships, including with the Nigerian National Assembly and labour organisations.

It was in the course of the privatisation that an actuarial consultant report on the N43 billion underfunded pension liabilities at NITEL unraveled the looming pension danger in Nigeria. In line with the memo of Mallam Nasir El-Rufai, DG of BPE at the time, former President Olusegun Obasanjo empanelled the Presidential Committee on Pension Reform to fix the entire pension system. Fola Adeola chaired the panel, while Musa Ibrahim (Deputy Director at the National Deposit Insurance Company, NDIC), Timi Austin-Peters, an Oxford University-trained Custody expert, and the cerebral Chinelo Anohu-Amazu were members.

After understudying other pension industries across the globe, especially those of Chile, Mexico, Argentina, among other South American countries that they visited, the team drafted what became the Pension Reform Act (PRA) 2004, creating the Contributory Pension Scheme (CPS) and PenCom as regulator in 2004.  Determined to make the new system work, Obasanjo appointed M.K Ahmed as pioneer DG, Adeola as Chairman of PenCom Governing Board, Musa Ibrahim as Commissioner (Inspectorate), and Anohu-Amazu as Commission Secretary and Legal Adviser. Anohu-Amazu was later appointed the Acting DG at the end of Ahmad-led Exco’s tenure in 2012. She later became a substantive DG in 2014.

She vigorously pursued a further reform of the pension act initiated by her predecessor, leading to the repeal of the PRA 2004 and enactment of PRA 2014. Anohu’s 2014 reforms birthed the Micro Pension Scheme to bring in Nigeria’s teeming informal sector under the Contributory Pension Scheme (CPS). She was at the verge of flagging off of the pilot scheme with the attendant robust technology before she and her entire team were abruptly removed. The PRA 2014 also properly established the Pension Transitional Arrangement Directorate (PTAD) to oversea the pensions of those who retired under the Old or Defined Benefit Scheme, hence not transiting to the CPS.

The PRA 2014 reviewed the minimum CPS contribution from 15 per cent to 18 per cent of the monthly emolument- 10 percent by employee. It provides the legal basis for the participation of States and Local Governments in the CPS. Importantly, PRA 2014, created new offences and prescribed harsher penalties for breaches. Importantly, throughout the time she was at PenCom in various capacities, there was never a single instance of fraud at PenCom laws and regulations were stringently enforced.

The number of contributors rose from five million to close to eight million during her tenure as DG, while assets under management grew from USD19.3 billion to a record USD42 billion. Chinelo created the first ever World Pension Summit Africa, which was held in Africa three years in a row, and convened global financial experts across the pension industry.

With a formidable track record in formulating investment strategies and extensive knowledge of institutional investment practice, experience in attracting new capital, expertise in the development of innovative asset classes, spanning pension funds, sovereign wealth funds, private equity and private family wealth funds, it is apt to say that her new cap fits her as she is poised to make Africa proud.