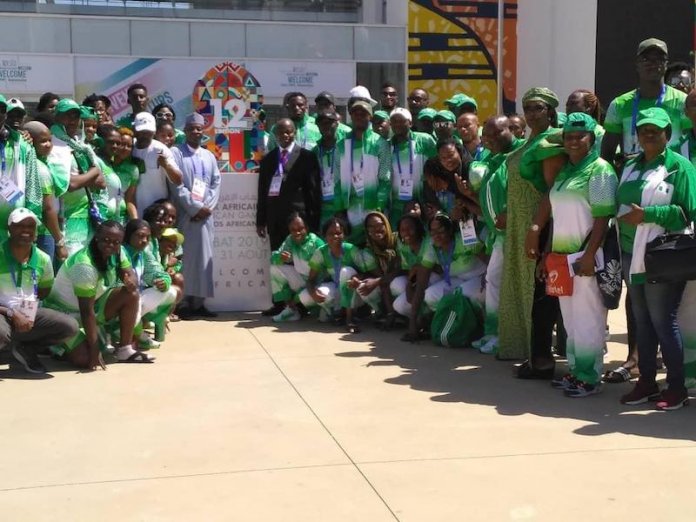 It was not an easy road to the title as the hosts backed by nearly all the fans inside the 15,000 seating capacity Dakar Arena stood solidly behind the Cheikh Sarr coached team 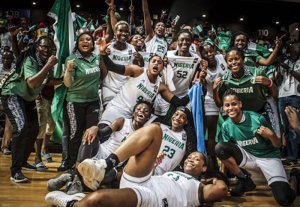 But like D’Tigress did two years ago in Mali, Evelyn Akhator and her teammates rose up to the task to once again deliver devastating blow to the Senegalese.

After dispatching Tunisia, Cameroon and DR Congo on the way to the final, Senegal made real good attempt to end Nigeria’s dominance of the continent.

Though the hosts began slowly, but surely had an improved defence to curtail D’Tigress, thereby forcing the Nigerian girls to making fouls. Akhator was worse culprit, registering six fouls in all.

At a point midway, Nigeria Head Coach Otis Hughley Jr had to introduce Aisha Balarabe. The physical game plan of the hosts was expected as the only way to match Nigeria’s sleek play.

D’Tigress too played solid defence and forced Senegal to turnover the ball and make easy buckets on the other end of the court.

Bintou Dieme had two fouls inside three minutes of playing time which was cause for worry for Coach Sarr who looked rather disturbed at his bench for help.

With Nigeria leading all first three quarters 14-10, 18-14, 16-13, Senegal took the battle as matter of life and death and came out smoking in the last quarter

Adrenaline rose with the few Nigerians in the Arena and those watching on television edgy with anxiety.

Nigeria was in foul trouble with 5:41 to play in the last quarter. Senegal therefore started using this to their advantage in this game full of emotions from both sets of players.

What do you tell your team during a timeout with 58.8 seconds on the clock in the last quarter when you’re leading 57-54? Nigeria’s Otis knew only carelessness from his ladies will throw this fourth title in the kitty aware and so dug deep to psyche them up.

At the final buzzer, Nigeria danced to the ultimate prize of this edition with scores standing at 60-55.

Meanwhile, African champions D’Tigress have been drawn with Mozambique and DR Congo in Group A of the African Qualifiers for the Pre-Qualifying Tournament of the 2020 Tokyo Olympic Games.

Top six teams at the FIBA Women’s AfroBasket in Senegal will play at this tournament. The teams include: the two Finalists, hosts Senegal and the reigning champions Nigeria, Mozambique, Mali, DR Congo and Angola.

The D’Tigress of Nigeria have been drawn with Mozambique and Democratic Republic of Congo in Group A while Senegal will face Mali and Angola in Group B.

The African Qualifiers for the Pre-Qualifying Tournament of the 2020 Tokyo Olympic Games will take place from November 14-17 at a country yet to be determined.

The two winners of the Semi-Finals will not play a Final as they will automatically advance to the 16-nation FIBA Women’s Olympic Qualifying Tournament (WOQT) where teams will be divided into four groups in February 2020.

The top three teams from each of the three WOQTs will qualify for the 2020 Tokyo Olympics.

Prior to this format, the winner of the FIBA Women’s AfroBasket automatically qualified for the Summer Olympics.

editor - April 3, 2020 2:42 am
29
GUEST COLUMNIST: KINGSLEY MOGHALU “Leadership is not about a title or about a designation. It’s about impact, influence, and inspiration.” – Robin S. Sharma Author of...