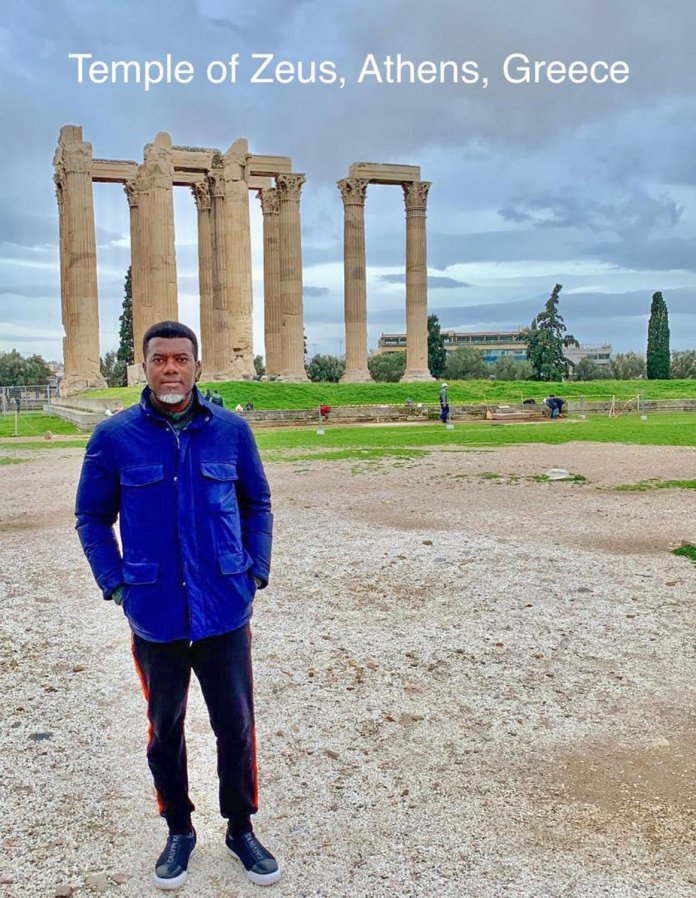 On Wednesday the 14th of August, 2019, I was discussing with a Nigerian Governor whose immediate elder sister and immediate younger brother are both ordained Christian ministers and I told him that Moses’ wife was Black. He was shocked and doubted me and I showed it to him in Numbers 12:1. Many Black people don’t know that Ethiopia is the first nation mentioned in The Holy Scriptures (Genesis 2:13). Beyond that, Moses was a student of his Black father-in-law (“Moses listened to his father-in-law and did everything he said.”-Exodus 18:24). The oldest book in the Holy Scriptures is not Genesis. It is the book of Job. Google it. It will surprise you that the people who attacked Job and made of with his livestock were Ethiopians (Job 1:15). The Word Sabeans refer to people from Sheba, which is the old name for Ethiopia.

Ham is the father of the Black Race. Please research this or Google it by yourself. Who were the people who built the ancient civilisation of Egypt? Read it by yourself in Psalm 78:51 “He struck down all the firstborn of Egypt, the firstfruits of manhood in the tents of Ham.” Do me a favour if you are reading this and Google The face of the Sphinx. Is it the face of a Black man or of another race? It is obviously the face of a Black person. Many people will be surprised that a Black Army of a million men once attacked Judah almost 3000 years ago. “Once an Ethiopian named Zerah attacked Judah with an army of 1,000,000 men and 300 chariots. They advanced to the town of Mareshah”-2 Chronicles 14:9.

The major problem of the Black man is that we are disconnected from our history. In Genesis chapter 10 verse 8, we read of the first man to rule the known world. His name is given as Nimrod. But that is not his real name. It was changed. His real name is Namurud. Google it.
If you are Yoruba, you know that most rural Yoruba interchange N and L. For instance, I have a relative from Ijebu ode (where my mum comes from), whose name is Nimota. But she calls herself Limota. According to Yoruba folklore, the founder of their race is Oduduwa, the son of Lamurudu. That Lamurudu of the Yorubas is actually the same person as Namurud whose name is mentioned in the original Scriptures before the names were changed.

Again, let me shock you with a little truth. The first images of Mariam (Mary) the Mother of the Son of God, to arrive in Europe were of a Dark skinned woman. One of oldest images is the Black Madonna of Czestochowa, believed to have been discovered by Constantinople’s mother in Jerusalem in the year 326 AD. The Black Madonna still exists today in Poland. Another Black Madonna exists in Montserrat, Spain.

What is the point of this? Over the years, The European churches have bleached the complexion of The Madonna and Her Son and sold the idea of a Blond Haired, Blue Eyed Jesus. That image has a very strong conditioning power to make people of colour view God and His Son as White, to the extent that there was a worldwide media frenzy in Kenya because a church there had to hire a Caucasian to act the role of Jesus. Apparently, none of the Kenyans was good enough to act as Jesus.

Yet, that is not all. As the European churches bleached the complexion of Mariam and her Son, they also bleached their names and Mariam became The Madonna, while Yeshu’a, her Son (the Messiah and Son of God), became Jesus.

People erroneously think that Jesus is the Greek translation of Yeshu’a. That is not true. Jesus is a VERSION of Yeshu’a. But it is not a translation. The name Yeshu’a is short for Yehoshu’a. It means the Lord saves. In Greek, the literal translation of Yehoshu’a or Yeshu’a is Theós sózei. sózó is the Greek word for salvation. I urge you not to take my word for this. Consult a Greek dictionary. Now, let me ask you a question. What is so hard in pronouncing Yeshu’a that it had to be changed to Jesus?

In the The 2004 film The Passion of the Christ, Mel Gibson insisted on referring to The Messiah as Yeshu’a because he wanted the movie to be ACCURATE. Think about that. Look at Moslems. Anywhere you go in this world, the name of Mohammed remains unchanged. At the worst, sometimes it is spelt with one m. Sometimes the o is replaced with u. But in essence, the purity of the name, as revealed in the Muslim holy book, the Quran, is retained. Why can’t we do the same with Yeshu’a? This is the Son of God. The ONLY Saviour of the world. Matthew 7:14 says “narrow is the gate, and narrow is the way, which leads unto life, and few there be that find it.”

Why don’t we stick to the narrow and remain with Yeshu’a? Some people say that European occultist came up with the name Jesus because it is similar to the name Zeus, who was the head of the Greek Pantheon of gods. I don’t know if that is true. What I know is that I went to the Temple of Zeus, in Greece, myself to investigate and what I found out is that Zeus had a son with a human woman called Dionysius or saviour, and his birthday is celebrated at the end of December, during the winter solstice (between December 25-30). He was considered the link between the living and the dead. And very importantly, he died and was resurrected by his father, Zeus. Please Google this information yourself.

The attached picture was taken on January 29, 2029 at the Temple of Zeus in Greece. The Holy Scriptures say “Study to show yourself approved unto God”-2 Timothy 2:15. I am not telling you what I have guessed, or what I have read. I went to Israel, Greece, Rome, Ethiopia, Turkey, Spain (Monastery of Montserrat), Poland and the Palestinian Authority, where I was at risk of being shot.

I studied Scripture and prayed and it is my love for God and desire to get to the bottom of the truth that made me spend huge sums of money and time investigating the truth. The name that God told Mariam and Joseph to call His Son is Yeshu’a. Let us obey God, not men who changed the name to something whose meaning we really do not know.

On Kenya’s Government and Reno’s Nuggets
On Saturday August 17, 2019, I was stunned to see that the Kenyan Government had stolen one of my Reno’s Nuggets quotes and attributed to President Uhuru Kenyatta.
On September 8, 2018, I tweeted the following Reno’s Nuggets:

“If you really love your children, get a business, not a job, because when you die your children cannot inherit your job, but they can definitely inherit your business. So when you close from work, don’t go and watch television. Go home and think of a business idea #RenosNuggets” Almost a year later, Uhuru Kenyatta Quotes tweeted my nuggets word for word and attributed it to President Kenyatta.

Why would they do this to President Uhuru, a man I respect so much? They just lifted my quote word for word and just attributed it to him. I am a number one bestselling author. I have visited Kenya twice and the Kenyan government gave me a red carrier treatment, only for them to give my nuggets a red carpet plagiarising. They ought to apologise and correct their error.

Reno’s Nuggets
When you have WEALTH, EMPOWER your SIBLINGS, or one day, your SIBLINGS will use their POVERTY to DISEMPOWER you. NOBODY knows you like your SIBLINGS. If they want to DESTROY you, only God can save you. So save them from POVERTY, for your PROTECTION. Learn from Joseph. Even though his brothers sold him into slavery, he still sent for all of them, plus their families, to cater for them when he became wealthy. When your siblings have, they will face themselves and leave you to enjoy your own wealth. So empower them!

Since we also have schools in Nigeria, I hope General Buhari, will order the CBN not to provide forex for his children who currently school in England. So selfish a leader. He wants to ban forex for food for the masses, while he educates his children abroad with our forex. While he is at it, General Buhari should also ask the CBN not to provide forex for medical tourists. No Nigerian has consumed forex for personal reasons like General Buhari, who spent almost 6 months in England in 2017, but the hypocrite doesn’t want forex for the masses good!
Pix: Reno Omori.jpg