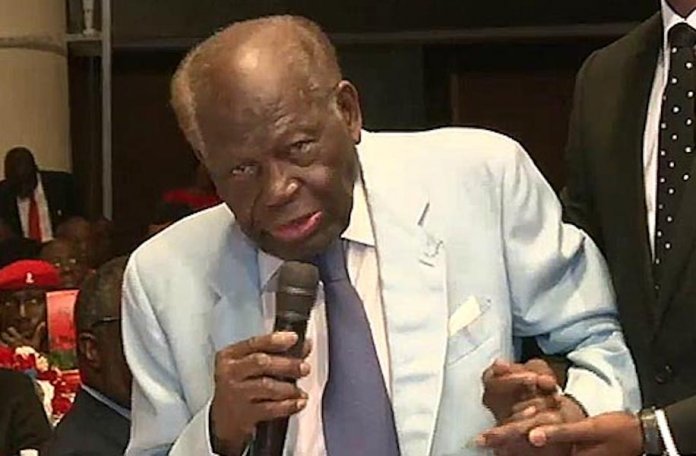 President Muhammadu Buhari has felicitated with renowned chartered accountant and legendary teacher, Chief Akintola Williams, on the occasion of his centenary birthday anniversary yesterday, saying Nigeria will always be proud of him.

Special Adviser to the President on Media and Publicity, Mr. Femi Adesina, in a statement issued in Abuja yesterday, said the President congratulated Williams on the many honours/pride he had brought to both Nigeria and Africa.

According to him, Buhari commended Williams for his pioneering and pacesetting roles, including laying the foundation for many institutions in the country, which he said included the Nigerian Stock Exchange and Institute of Chartered Accountants, which had long turned into strong pillars of the Nigerian economy.

Adesina also said as the first chartered accountant in Africa, the President believes that Williams’ prudent utilisation of time from his youthful days, and a proclivity for looking beyond circumstances, separated him early for global recognition, turning him into an institution that many would continue to study and draw inspiration from.

“President Buhari extols the centenarian’s adventurous spirit of seeking and taking up challenges like music, arts and promotion of culture, underscoring his willingness to always serve the country and move it to greater heights through knowledge, wisdom and counsels to leaders.

“The President joins family, friends and professional colleagues in celebrating with Oloye Williams on his 100th birthday, and for achieving the feat of inspiring the largest professional services firm in Nigeria with Deloitte & Touche.

“He prayed that the almighty God will grant Chief Williams health and strength to continue serving God, the country and humanity,” the statement added.

Williams was born on August 9, 1919 into the family of Thomas Ekundayo Williams, a clerk in the colonial service, who later trained as a legal practitioner in London and set up his practice in Lagos.

The young Williams had his education in the early 1930s at Olowogbowo Methodist Primary School, Bankole Street, Apongbon, Lagos Island, Lagos, and CMS Grammar School, also in Lagos. The bright young man then went to Yaba Higher College on scholarship of UAC, and obtained a diploma in commerce.

He moved to England in 1944 to studied Banking and Finance at the University of London where he graduated in 1946 with a Bachelor of Commerce. He qualified as a chartered accountant in England in 1949.

Akintola Williams returned to Nigeria in 1950, and served with the Inland Revenue as an assessment officer until March 1952, when he left the civil service and founded his firm, Akintola Williams & Co. in Lagos.