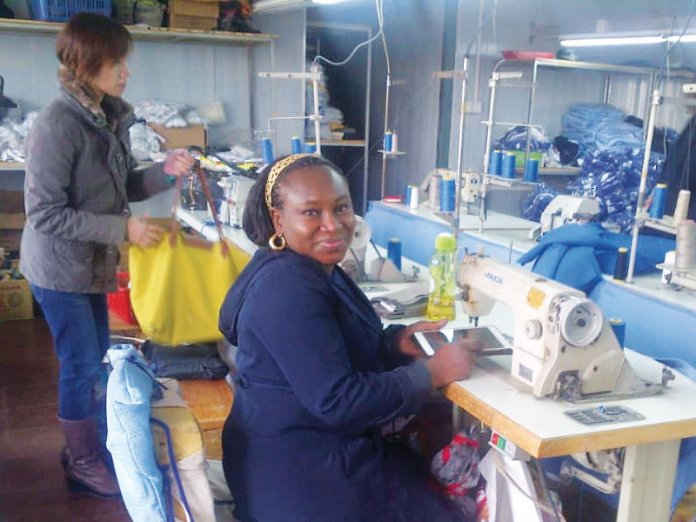 Mrs. Patricia Gabkwet, a banker turned tailor and fashion designer spoke with JOHN SHIKLAM on why she left the banking sector to establish a tailoring company and the challenges of setting up a business in a hostile economic environment like Nigeria

Like many young people with ambition, Mrs. Patricia Gabkwet’s dream was to be a doctor and to establish a world class private hospital to provide quality healthcare services for the people.

For her, the idea of working for somebody never crossed her mind because, even as a young secondary school girl at the famous St.Louis College, Jos, Plateau State, she already had several business ideas.

But the reality is that it is one thing to dream and it is another thing to make the dream become a reality depending on one’s determination, fate and other factors and circumstances that shape people’s life.

As fate would have it, she ended up as an accountant without regrets, giving rise to yet another dream and vision.

This time around, her desire was to establish a business of her own. She came up with the idea of a first class tailoring outfit that will be one of its kind in providing a variety of clothing needs of Nigerians, ranging from fashion to school uniforms to wedding gowns etc.

Again, she was still far away from realising her dream after graduating from the university of Jos as she had no capital to acquire the necessary tools for a start, so she ended up in the banking industry where she took up an appointment with Zenith Bank and rose to the rank of assistant manager.

This afforded her the opportunity to acquire the necessary skills in investment and management
According to her, despite her sojourn in the banking sector, she kept her dream alive, adding that the banking experience, more than anything prepared her to actualise her dream.

“Growing up, I dreamt of becoming a doctor but by sheer providence, I later found myself in the banking sector. I was once a staff of Zenith Bank where I rose to the rank of Assistant Manager.

“I must say that my sojourn in the bank was a blessing because the experience and skills I acquired there also prepared me towards establishing my tailoring business” she said in an interview.

Speaking further, she said the other skill she needed so badly was the tailoring skills to be adequately prepared.

According to her, the opportunity to pursue this life-long dream of establishing the tailoring company came in 2012, when she resigned from the bank, following the deployment of her husband, a serving military officer, to China as a Military Attaché.
Her relocation to Beijing, the Chinese capital with her family provided her the opportunity to hone her tailoring skills for three years, from January 2013 to January 2016.

Narrating her experience and challenges in setting up a business in Nigeria’s hostile economic environment, Gabkwet explained that, starting off was not easy an task, saying however that the 11 years she spent working in the banking industry prepared her for the venture.

“The need to persevere and be patient, which I learnt as a marketer at one point in my career as a banker, were key and instrumental in helping me settle into the realities of Nigeria’s business environment” she said.

Besides, she noted that prudent management of resources that the Nigerian banking sector is known for was something that she imbibed during her days at Zenith bank.

“So I can confidently say that my experience in Zenith Bank adequately prepared me for the business world. Basically, working at Zenith was a stepping stone for me and I am glad God gave me that opportunity” she said.

According to her, she chose to invest in tailoring because she was always been fascinated with women’s fashion and initially had the plan to specialise in it.

“This strategy however changed before I left for China. I realised that due to the loss in confidence in Nigerian school uniform tailors, most schools, particularly private schools, import school uniforms from the United Kingdom, China and Bangladesh.

“Indeed, when some of our friends, who are school proprietors and proprietresses, found out that I was relocating to China, all they wanted was for us to assist them make bulk purchases of school uniforms,” she recalled.

According to her: “It was unbelievable that so much forex was expended on school uniforms from foreign companies while our sewing industry suffers.

“It was at that point that it struck me that this could be a business opportunity that I could explore. I then decided to focus on school uniforms and work wears.

“Consequently, I enrolled in a professional design class at Beijing organised by Mr. Liu Zhizhou. Liu Zhizhou, a renowned designer, tailor, sewing teacher and quality assurance expert with over 15 years’ experience and has worked with prominent clothing lines such as H &M, Miu Miu, Dolce and Gabbana among others.”

She explained further that after two years of training, she worked at Tanyue (Beijing) Garment Company Limited for about three months, adding that the three months stint was very important as it enabled her understudy the Chinese garment industry.

She said wiring at the garment company afforded her the opportunity to understand the workings and settings of a typical sewing factory, “having decided long ago that I wanted to someday own my own sewing factory”.

Gabkwet maintained that the Nigerian Fashion industry is quite huge and whichever aspect one specialises in, it is viable.

“Indeed, according to the Manufacturers Association of Nigeria (MAN), it is a $3.5 Billion industry. So irrespective of which aspect one specialises in, the sector remains viable, vibrant and big enough for everyone” she added.

She said the initial challenge she encountered while setting up the company was finding tailors with the expertise, patience and dedication to meet the required standard that the company had carved out in terms of sewing school uniforms and work place wears.

She noted that most schools went into school uniform importation due to loss of confidence in Nigerian tailors as a result of the poor quality of their products, coupled with poor delivery times.

“After years of disappointments from tailors, this wasn’t an easy task. Also, accessing loans from financial institutions including government owned institutions was a challenge due to their stringent conditions” she said.

Speaking further on the challenges of establishing a business in Nigeria, she recalled the efforts she made in 2017 to access loans from one of the government owned financial institutions which was fruitless, despite meeting all the conditions for the loan.

“Of course, power remains a challenge in virtually every business and ours isn’t an exception. So, basically, these were some of the challenges we faced” she said.

On the recruitment of qualified tailors, she said it was not easy getting tailors that can “adjust and conform to our vision which is hinged on quality school uniforms and work wears, but with time, constant supervision and encouragement, we have been able to meet up with the standards we have set for our products.

“I can confidently say that so far, our school uniforms and work wear products are among the best produced in Nigeria and even better than those imported from overseas, ” she said.

Most schools that gave us the opportunity to serve them have stopped importing from overseas.
“Our ability to satisfy their needs have since changed their attitudes after realising that our products are of high stand and affordable”.

According to her, in less than three years, Maya-The School Uniforms has been able to carve a special niche for itself as as a result of its quality products .

“Our mission is to provide the best school and work wears. By work wears, I am referring to nurses and doctors coats, industrial overalls, sports wears, paramilitary uniforms, security company uniforms etc…” she emphasised.

Besides, she said the establishment of the company has provided employment for those with the requisite skills, as well as training for people who desire skills in tailoring.

She called on the government to review the stringent lending conditions by its financial institutions such as the Bank of Industry and the Development Bank of Nigeria.

The conditions of government owned financial institutions, according to her, are so discouraging and frustrating for Small and Medium Enterprises (SMEs), seeking to access finances.

“It has also affected the growth of SMEs in Nigeria which in the last 10 years stood at not more than 10,000 in the entire nation. And when you consider the fact that SMEs are supposed to be the backbone of any economy, then the need to review these conditions are imperative.
“The issue of multiple taxation is also another area that I think the federal government should review. Why tax SMEs that are barely surviving? One sometimes wonders if some of these taxes are necessary,” she lamented.