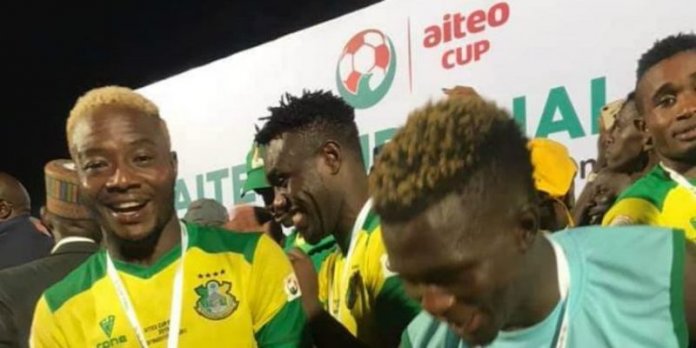 Kano State Governor, Abdullahi Umar Ganduje, has showered $1,000 on each of the Kano Pillars players and officials as part of the incentives for the Sai Masu Gida for winning the 2019 AITEO Cup.

In appreciation of the team for winning the former FA Cup for the state for the first time in 66 years, Ganduje said: “We are giving $1,000 to each player and members of your technical crew making that $40,000 for all of you to share. This is just one of the several gestures lined up to appreciate your effort.”

Speaking at the Government House in Kano on Monday when the team paid him a ‘Thank You’ visit and to officially present the trophy to the governor,

Ganduje assured them of his continued support and commitment towards the development of the club and other sporting activities in the state.

He said that as far as he is concerned, “Kano Pillars remain the best football club in Nigeria. And all Nigerians know this and they understand this very well when Pillars defeated Niger Tornadoes.

“We have every reason to celebrate. Our players are disciplined, committed and extremely patriotic.”

He explained that it is his administration’s resolve to give sporting activities priority which explains why he decided to come up with a new Ministry of Youth and Sports Development.

Still on the AITEO Cup triumph, Ganduje said it remains one trophy that eluded the state for a long period despite Kano Pillars winning the league title several times.

“This trophy eluded our state for over 60 years. We are happy that the long wait is now over as Kano Pillars have finally won it for us. We have every reason to rejoice with you our dear Pillars. We shall do everything possible for your development,” Ganduje reiterated.

He disclosed that, the state government would host the team in a special and befitting state dinner where he would unveil some surprise packages for the players and officials as a way of appreciating them on behalf of the good people of Kano State.

“When the final match ended goalless and a winner has to emerge via penalty shoot out, I knew we were going to win the trophy. I wasn’t surprised when Pillars made it,” he stressed.

New Chairman of the Kano Pillars, Suraj Shu’aibu Yahaya commended the governor for all his untiring efforts in moving the club forward, assuring him, “my tenure as a Chairman of this great club would maintain discipline and culture of winning trophies. Yes, our players are disciplined and they would remain so and improve upon that.”

CHADWICK BOSEMAN, Black Panther, Who Connects Us to Africa