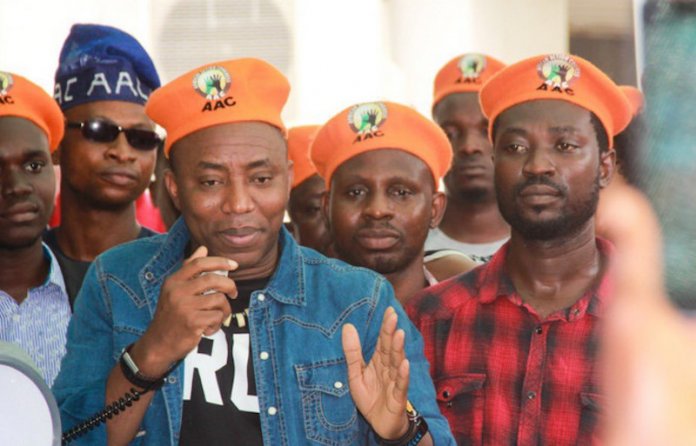 The Department of State Security (DSS) was silent yesterday on when it would obey the ruling of the Federal High Court, Kaduna that granted leave, on Monday, to the leader of the Islamic Movement of Nigeria (IMN), Sheik Ibrahim El-Zakzaky, and his wife, Zeenat, to travel to India for medical treatment.

It, however, approached a Federal High Court in Abuja yesterday evening, requesting for an order to detain the leader of #Revolution Now, Mr. Omoyele Sowore, for 90 days to enable it conclude its investigations on the detainees.

But the court asked the service to return tomorrow for a determination of its request.
In spite of multiple contacts with the DSS yesterday, the service had failed to respond to THISDAY enquiries on the two detainees, refusing to talk on when it would charge Sowore to court or release El-Zakzaky and Zeenat to travel abroad to look after their health.

Competent security sources, however, told THISDAY that in the case of el-Zakzaky, adequate counter security measures were being put in place given the interest shown by the Islamic Republic of Iran in the IMN and its leader.

“The permission to travel must be adhered to especially as it concerns their security in India. They do not want to run the risk of Iranian agents snatching the suspects. I am sure they want to also work out a water tight security arrangement with the Indian government,” one of the sources said.

The DSS had said on Monday that it had received the order granting el-Zakzaky leave to travel to India for medical treatment.
Its Public Relations Officer, Mr. Peter Afunanya, had said in a statement in Abuja that the service was liaising with relevant stakeholders to ensure compliance with the court order.
He said conformity with the order would be in line with the service’s avowed commitment to the rule of law inherent in a democracy.
As part of the court ruling, a DSS official among other state officials are to accompany the detainees to India.

Meanwhile, Justice Taiwo Taiwo of the Federal High Court, Abuja yesterday adjourned to tomorrow to rule on an application by the DSS, seeking an order of court to detain the Convener of #RevolutionNow protests, Sowore, for 90 days pending the conclusion of its investigation.
Sowore, also presidential candidate of the African Action Congress (AAC) in the February 2019 elections, was arrested in the early hours of Saturday by operatives of the DSS in Lagos.
The DSS is seeking to prosecute him on charges bordering on incitement and treason. He was arrested on account of the #RevolutionNow protest, which he had spearheaded.

Sowore was moved to Abuja on Sunday morning and is currently being detained at a DSS facility.
However, the security agency yesterday approached the court for an order to detain Sowore beyond 48 hours provided by law.

The request was contained in exparte motion marked FHC/ABJ/CS/ 915/19 and filed on behalf of the agency by its counsel, G. O. Abadua.
0But the trial judge, Justice Taiwo Taiwo, after listening to the submission of the DSS lawyer, said he needed time to watch the video clips attached to the motion.
He accordingly adjourned ruling to Thursday, August 8.

In Lagos, the state Police Command said yesterday that it had charged six out of the arrested nine protesters to Ebute Metta Magistrates’ Court.
The Lagos State Police Public Relations Officer, Mr. Bala Elkana, a Deputy Superintendent, confirmed the arraignment but could not specify on what they charged them with.

Sowore’s friends said yesterday that contrary to earlier plans to take the #RevolutionNow protest to the Freedom Park, Ojota, Lagos, they would now focus on the release of Sowore.
And as the fate of Sowore hangs, the Peoples Democratic Party (PDP) has asked President Muhammadu Buhari to as a matter of urgency release those it calls political prisoners allegedly languishing in jail.

Co-ordinator of the protest in Abuja, Mr. Dare Atoye Ariyo, told THISDAY that the focus of the protest would now be on how to get Sowore out of detention.
He said the Abuja group would meet overnight to determine how to proceed.
“We expected the DSS to arraign him today (yesterday) since it would have exceeded 48 hours since his arrest in accordance with the constitution,” he said, adding: “We will meet this evening and take a decision on how to proceed but our focus would be changing to protest Sowore’s detention while others in other parts of the country will continue with the revolution march.”

However, an associate of the detained online publisher, Mr. Deji Adeyanju, said members of the “Take it Back” Movement visited Sowore at the DSS detention facility on Monday.
His post on Facebook said the detained activist was in high spirits.
“At 6pm today, 5th August, 2019, members of the Take it Back Movement were allowed to visit Sowore, for the first time since his armed abduction. He’s in high spirit and unmoved,” he stated.

However, contrary to earlier plans that the second day of the #RevolutionNow protest would take place at Freedom Park, Ojota, Lagos, the organisers yesterday said their focus would be on the release of Sowore.
According to the spokesman of the movement, Mr. Lanre Adeleke, the coalition has no intention to continue with the protest for now.

Dismissing the notion as misinformation, he said their plan was to ensure the safety of all those arrested nationwide, including the nine picked up by the police in Lagos.
THISDAY had set out to Freedom Park to cover the protest only to meet the presence of a large team of security officials deployed to secure the park.
In a phone interview with THISDAY later, the spokesman said they didn’t announce any protest.
“We didn’t announce any programme for Freedom Park today (yesterday). What you guys heard was totally misinformation because we have to use today to see to all those persons that have been arrested nationwide and be sure of their safety,” he said.

Falana: Sowore Should Have Been Arraigned by Now

Reacting to the continued detention of Sowore, a human rights lawyer, Mr. Femi Falana (SAN), expressed disappointment that Sowore had not been arraigned.
He said by law, a suspect should not be kept in detention without arraignment within 48 hours of arrest.
Falana said he expected Sowore to have been arraigned on Monday.
“I have sent lawyers to the DSS as of Tuesday morning and I’m awaiting a feedback,” he said of efforts to release Sowore.
Falana, who disagreed with the police that Sowore was liable to be prosecuted for treason for allegedly planning to overthrow a democratically-elected government through a revolution, said arrangements had been made to defend the activist if arraigned.

In another development, the PDP has asked Buhari to release those it called political prisoners in jail.
The National Chairman of the PDP, Mr. Uche Secondus, said this in Yola, the Adamawa State capital, yesterday while addressing journalists.
Secondus said he was in Yola to condole with the Governor Ahmadu Fintiri over the demise of his father.

He said there should be no room for political prisoners in a democratic society.
“We ask President Mohammadu Buhari to release all political prisoners. It is not done in any democratic political dispensation,” he said, adding: “What we are seeing today is as if we are in a military era.”
Secondus urged the media to take the lead because the media played a major role in bringing democratic system of government to the country.
“I want to call on journalists and media managers not to sit on the fence. They can’t just sit and watch the country sliding,” he said.