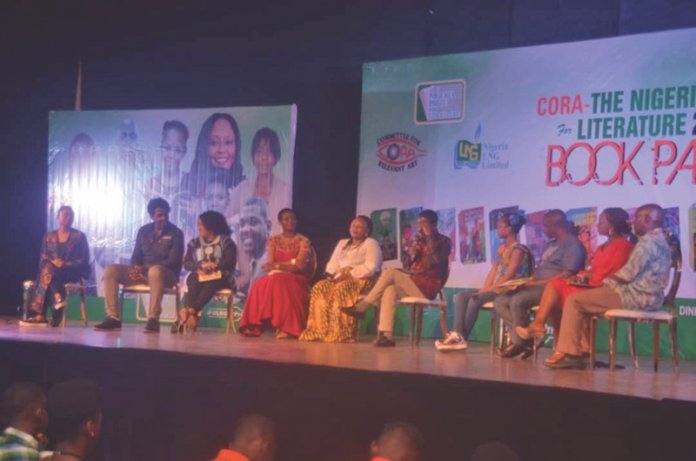 Guests sat around in clusters in the beautifully-decorated Shell Hall, MUSON Centre, Onikan Lagos. This was for a special book party in honour of 11 authors. The book party has since 2004 been an annual feature of the literary calendar thanks to the Nigerian Liquefied Natural Gas (NLNG) and its collaborators the Committee for Relevant Art (CORA). The idea is to get the authors on The Nigeria Literature Prize longlist engage their audience.

This year, which focuses on children’s literature, 11 contenders for the prestigious literary prize have been chosen by a panel of judges chaired by Professor Obodimma Oha, who is a professor of Cultural Semiotics and Stylistics at the Department of English, University of Ibadan. Actually, the hopeful 11 have been announced by the prize’s Advisory Board since July 18 as follows: Ndidi Enenmor’s A Hero’s Welcome, Jude Idada’s Boom Boom, Adaobi Tricia Nwaubani’s Buried Beneath the Baobab Tree, Anisa Daniel-Oniko’s Double A for Adventure, Anote Ajeluorou’s Igho Goes to Farm, Dunni Olatunde’s Mystery at Ebenezer’s Lodge, Nkiru Uzoh’s Obioma: A Girl’s Journey to Self-Discovery, Oladele Medaiyese’s She Calls Him Daddy, Lami Adejoh Opawale’s Spurred Surprises and O. T. Begho’s The Great Walls of Benin.

Obviously, it is a good year for female writers, who are seven in the longlist. On the mouth-watering prize money, which is arguably Africa’s biggest reward for literary excellence, CORA’s secretary-general, CORA, Akinosho, revealed that the $100,000 prize money exchanges for over N36m this year.

“That’s quite some significant amount of money in anyone’s account,” he said. “But at CORA, we see an opportunity for the creation of an entire economy around the book trade. That’s why we initiated this. We haven’t got there yet but it doesn’t stop us from believing that a full ecosystem of the book trade is still possible in spite of the age of twitter. That we can have robust publishing, book clubs author’s appearances to audiences to read everywhere from Okokomaiko to Maitama; bookshops in traditional markets, in shopping malls, online sales of e-books and audiobooks, active proliferation of book blogs, book reviews everywhere; libraries in every corner from Ajangbadi to Kaura Namoda; indeed as the distinguished poet, Odia Ofeimun once said, the Cocacolanisation of books is still possible.”
Each year, the prize rewards one of the four literary genres namely prose fiction, poetry, drama and children’s literature.

The youngest in the list of contestants for children’s literature this year is 10-year-old Anisa Daniel-Oniko, whose presence on the stage with other experienced writers was mind-blowing. Her debut novel explores the adventures of two young girls against a backdrop of mystery. Not far from where she sat on stage was Jude Idada, a playwright, director and author whose entry serves as an exposé on the scourge of sickle cell through the child characters.

“We can change the world if we can do things right,” Idada said, fielding questions around the world of his book. Ajeluorou, who has been a journalist for about three decades disclosed the audience that his book centres on the disruptive nature of technology in our lives. Igho, like any child born in this internet age, is distracted by the web and performs far below expectation in school. His ‘punishment’ is to spend his holiday at the village while his siblings go to Disneyland in the US. The culture vibe in the work resonated with Ndidi Chiazor-Enenmor in A Hero’s Welcome where like Igho, Enyinna goes to the village for his holiday but is saved by his knowledge of his native language which helps him detect an impending danger.

“Our dialect is important. Let every child speak at least one Nigerian language. It doesn’t matter if the Ibo child speaks Yoruba language,” Ndidi said, earning a round of heartfelt applause from the audience. Taking a moralistic stance, Nkiru Uzoh argued that the protagonist in her work Obioma was created to teach young girls about self-esteem. She blamed the lack of self-esteem as the cause for many misdemeanours among children such as exam malpractices, indiscriminate and pre-marital sex as well as the misuse of sexuality.
Still in the holiday spirit, Dunni Olatunde’s Mystery at Ebenezer Lodge gives an account of Ilesanmi children alongside their neighbour Nosa who spend a week in the care of their grandmother’s aunt in old mansion that couldn’t guarantee a quiet holiday. The story fits a movie synopsis, inspiring countless imageries at the book party which was rounded off with energetic dance performances from children troupes.

For the medical doctor and author, Nnenna Ochiche, writing her piece, Ginika’s Adventures made her assume the mind of an introvert child even though she is an extrovert. Oladele Medaiyese, who is a pharmacist wrote on a young girl, Julia who is molested by her stepfather in She Calls Him Daddy. A very sober mood was cast on the audience as he spoke on the life-long trauma that follows the episodes of sexual abuse.

In Spurred Surprises, Lami Adejoh Opawale seems to be concerned with bourgeois feminism in the three young girls’ characters that demonstrate independent spirit. Unlike other authors on the longlist, Opawale had to publish her own work when no publisher would.
The moderator, who punctuated the session with book reading by children, Lookman Sanusi has devoted over 30 years to children development through training, theatre and literature. He introduced O. T. Begho, a writer based abroad – through a webcam – whose entry focuses on African history and the life-changing adventure of Obi and Titi.

A shortlist of three will be announced in September and if there is a winner, that will be known in October. No winner was announced in 2015. Still, the Manager, Corporate Communications and Public Affairs, Andy Odeh assured the literary community of the organisation’s commitment to responsible corporate citizenship.
“The Nigeria Prize for Literature is one of its numerous contributions towards building a better Nigeria,’’ he declared.
Pix:: A cross section of the contestants at the book party.jpg