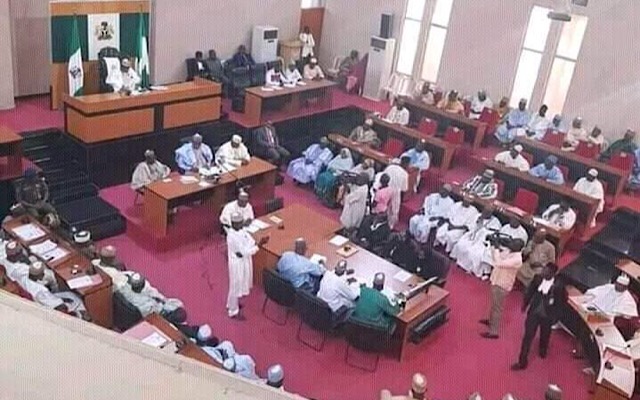 The 17 embattled members of the Bauchi State House of Assembly (BAHA) led by a factional Speaker, Hon. Kawuwa Shehu Damina have buried the hatchet and opted for peace in a special session held last night.

THISDAY checks revealed that the Bauchi State House of Assembly was thrown into confusion and crisis when elected Members held parallel inauguration leading to the emergence of two factional Speakers.

Damina and his faction took the oath of office at about 8:30 p.m. on Friday at a Special Sitting presided over by the Deputy Speaker Danlami Ahmed Kawule (Zungur Galambi) which was witnessed by the state Governor Bala Mohammed, hos Deputy Senator Baba Tella and other top government officials.

The All Progressives Congress(APC) has 22 Members, the Peoples Democratic Party(PDP) has 8 while the New Nigeria People’s Party (NNPP)has one.

But  yesterday night, the former Speaker, Kawuwa Damina, led the remaining 16 members to take their oath of office and oath of allegiance.

The Members were inaugurated at a special session presided over by the Deputy Speaker of the House, Hon. Danlami Ahmed Kawule.

Ahmed Kawule tasked the inaugurated members to discharge their responsibilities in accordance with the constitution of the Federal Republic of Nigeria and the rules of the Assembly.  Speaking with newsmen shortly after the inauguration of the members, the state Governor, Senator Bala Abdulkadir Mohammed expressed gratitude to the members for accepting to be inaugurated.

Governor Bala Mohammed said the state government resolved the crisis through seeking intervention of relevant stakeholders notably the traditional rulers.  The Governor opined that, with this development, Bauchi State has shown that it is the home of democracy in the country.