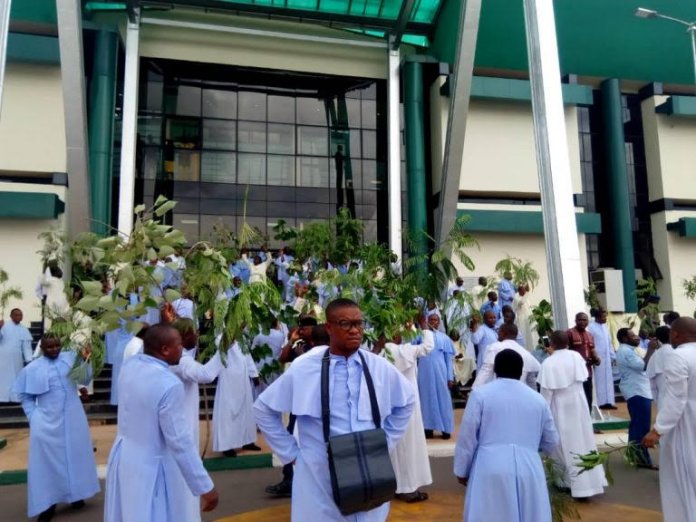 No fewer than 200 Catholic Priests within the Catholic Diocese of Enugu have protested the killing of their colleague, Rev. Fr. Paul Offu, in Enugu State on Friday.
Offu was killed by yet to be identified gunmen, suspected to be armed herdsmen, while traveling on Ihe-Agbudu Road in Awgu Local Government Area of the state in the evening of Thursday, Aug. 1.
The Catholic priests, who marched peacefully, passed through major roads within Enugu metropolis on their white official cassock.
They held placards with the various inscriptions such as: “Enough is Enough’’, “Catholic Priests are Targets of Hoodlums’’,  “We Cannot be Living in Fear’’, “Government Must Address Security Challenge in Enugu’’ and “We Are Not Happy with Government’’.
Addressing newsmen on the development, the Catholic Bishop of Enugu, Most Rev. Callistus Onaga, said that the protest was to register the displeasure of the diocese at the incessant attacks on Catholic priests by hoodlums in the state, which had lasted for seven years now.
Onaga said that the Catholic priests were simply demanding for more security in the state adding that “if there are crop of bad herdsmen in the state they should be fished out and we will continue to live in peace with the good ones’’.
The bishop, however, noted that the attack had become unbearable as the diocese lost a priest in March, who was killed by suspected armed herdsmen.
He said that two weeks ago, another priest was shot in the state and “he is still receiving intensive medical attention as we speak’’.
“I am sorrowful and utterly disappointed on the security in the state. This year alone, we (diocese) have suffered some casualties.
“While we get worried when our priests are attacked is that it shows the level of insecurity other Nigerians face daily.
“Our priests are very much respected and honoured by the people (locals); so if these things can happen to them, what happens to the flock (the people they shepherd?).
“We were shocked to see a priest that joined in our meeting yesterday afternoon in this Bishop’s House very healthy and sound being reported to have died.
“Everybody is so sad, because it is becoming too constant especially within the past six or seven years now; we have suffered serious kidnapping of our priests.
“It is becoming too bad. In 2013, 2014, 2015, 2016 our priests were kidnapped at various locations in the state.
“Only in 2017, we were given some breathing space. It continued in 2018 and this year, 2019; it is worse as we have suffered the death of a priest in March this year and now another issue,’’ he lamented. (NAN)