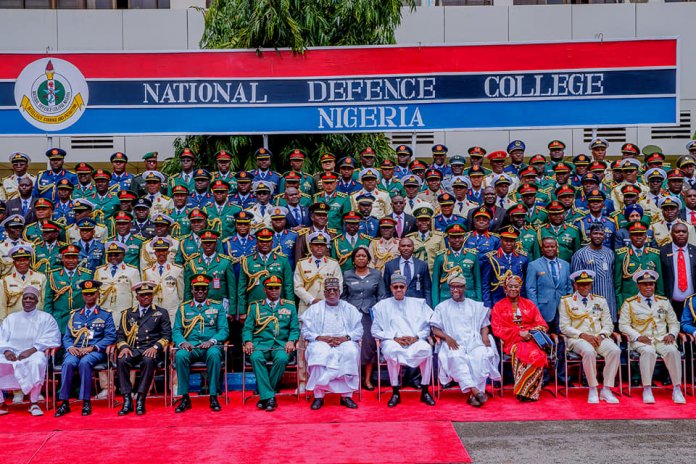 President Muhammadu Buhari has reiterated his commitment to rid Nigeria of terrorism and insurgency as well as resolve all associated national security and humanitarian challenges in the country.

Buhari stated this at the Graduation Ceremony of the National Defence College Course 27, on Friday in Abuja.

He said that in spite of the commendable progress made by the armed forces in combating terrorism and insurgency, the nation was still beset with some existential and fundamental challenges.

According to him, the Boko Haram for instance, having lost their insurgency campaign, now factionalised and mutated into a new form of terrorist threat.

“Other crimes such as proliferation of Small Arms and Light Weapons, drug trafficking, drug and substance abuse and communal conflict, all add up to the security mix.

“Furthermore, the state of education, the youth bulge, unemployment, socio-political and ethno-religious divisions, fake news and hate speeches all help to quicken and compound the security challenges.

“Our government is poised to promote national security and development; we remain committed to promoting a vision of a secure, safe, just, peaceful, prosperous and strong nation.

“Indeed, we shall be employing all elements of our national and human resources to ensure security, a just society, peaceful co-existence, national unity, prosperity and sustainable development, while promoting our good standing abroad,’’ he said.

The president said that at inception of his administration in 2015 the nation was at a critical crossroads adding that the Boko Haram insurgency was at the height of its infamy and virtually held Nigeria hostage.

He added that the situation constituted a clear and present danger to the corporate existence of Nigeria as a nation.

Buhari said that a lot progress had been made in tackling the security challenges, with the combined efforts of Nigeria’s regional coalition partners, the military and other security agencies.

He commended the college for keeping to its mandate and the efforts to re-organise and rebrand the centre to enable it to conduct research on contemporary issues of security and development.

He also pledged his commitment to continuous support for the centre in order to make it a regional hub of strategic defence policy study.

The president, however, tasked the participants of the Course 27 to see themselves as sufficiently groomed, in both character and learning, to take up the national challenges.

According to him, it is a clarion call to duty in service to their country.

“In the coming years, all of you Nigerians and allied graduands will be called to account for the period of strategic training in the College and you must not fail your nations,’’ he said.

Earlier, the Commandant, NDC, Rear Adm. Mackson Kadiri, said that the higher defence strategic studies programme of the college had gained international acceptance as a valid strategic professional military training education in Africa and beyond.

Kadiri disclosed that 127 participants drawn from Nigerian military, the police, relevant ministries, departments and agencies of government as well as military officers from allied countries graduated from the course.

He explained that the number was made up of 94 officers of the rank of colonel, brigadier general of army and equivalent from the sister security services and three commissioners of police.

Others according to him, are 13 civilians from strategic departments of ministries and agencies of government and 17 participants from ally countries across Africa, Asia and the Americas.

“Due to the effort of the defence headquarters under the able leadership of Chief of Defence Staff, the foreign participation in the NDC Course 27 is the largest ever since inception of the college.

“This indicates the rising international profile of the College.

“In terms of infrastructure, the college has increased the pace of construction work at the college’s permanent site to ensure its completion in order to admit our participants to a functional and conducive environment.

“I wish to seize this opportunity to express our profound appreciation to the president for his sustained resource support for infrastructural development of the college.

“In the outgoing academic year, the college made great stride in terms of strategic engagement to contribute to national and regional security and to improve the overall capacity going forward,’’ he said.

A foreign participant, Group Capt. Maluk Singh, from the Indian Air Force, told News Agency of Nigeria (NAN) that the programme was impactful to him.

Singh promised to make use of the knowledge acquired to contribute to the national security and defence policy of his home country.

He disclosed that just like Nigeria, India had pockets of security challenges as a large country, adding that the Indian military had been able to bring some of them under control.

“It has been a very useful course for me because the course was so detailed and has given me the skill for a higher strategic position in the military and government.

“`I have learnt a lot of things here in Nigeria’s National Defence College that will help me proffer solutions to problems.

`We do have some security situation in our country but not on a large scale.

“Just like Boko Haram here, we have some problems in Kashmir state, in the central India as well as insurgency problem in North-East Indian States but we have been able to tackle them to a large extent,’’ he said. (NAN)