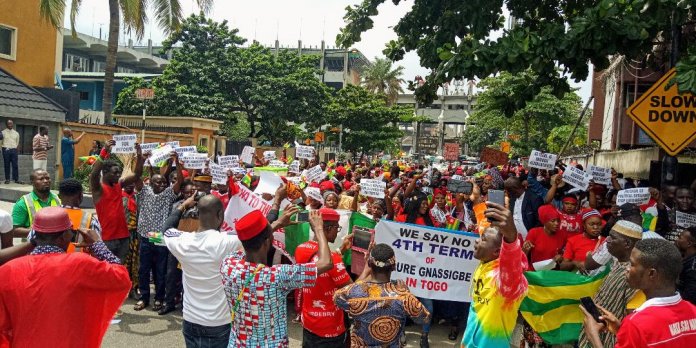 Thousands of Togolese from several West African countries stormed Lagos on Thursday to protest against Faure Gnassingbe’s attempts to run for a fourth term in office as president.

The protesters who started converging on the Tafawa Balewa Square in Lagos Island as early as 7:00am, sang and danced to revolutionary songs in native Togolese dialects.

Some of the placards carried by the protesters read: “No to Fourth term for Faure”, We want Freedom from Gnassingbe and His Children”, “52 Years is Enough”, “We Want Freedom in Togo”,  “Transition for Reforms”, etc.

About 10:00am, the protesters began their march from the TBS to the Economic Community for West African States (ECOWAS) secretariat also located within the Onikan axis of the Lagos Island.

Traffic was momentarily halted as the Togolese who were about 10,000 sang and danced from TBS to Force Road and meandered to end up at the ECOWAS secretariat.

On getting to the secretariat, some top officials of ECOWAS received the protest letter sent on behalf of Togolese in diaspora, calling for an end to repression and reforms in the West African nation.

Spokesperson of the group, Ms Foussena Djagba, told reporters present that Togo was the only country in West Africa not to have enjoyed constitutional transition of power from one government to another.

“After 38 years in power, Gnassingbe Eyadema died in 2005. He was replaced  in authority by his son Faure Gnassingbe. After serious and massive human rights violations, an agreement was signed between his government and the opposition in 2006.

“The Comprehensive Political Agreement (CPA) provides for constitutional, institutional and electoral reforms for the normalization of political life in our country. This agreement was not honour by Faure’s government as no reforms were made in our country. Not even 27 dialogues allow Togolese people to get out of this socio-political crisis. The bad faith of our government is well documented. This is why we say no, enough is enough,” stressed the spokesperson of the group.

She insisted that since August 19, 2017, Togolese at home and in the diasporas have been demanding for return to the 1992 constitution and the effectiveness of the voting rights of those outside the country.

And so as the 2020 election approaches, Djagba said Togolese were prepared to damn the consequence of ensuring that Faure Gnassingbe did not get a fourth term as president.

“The current situation in Togo poses a real risk for the entire sub-region. This is why we are appealing to ECOWAS leaders and most especially Nigeria to intervene in this matter and ask Faure Gnassingbe to step down to allow for fresh air in Togo. We are also calling on the President of Niger Republic who is the new ECOWAS chairman to intervene now before it is too late,” stressed Djagba