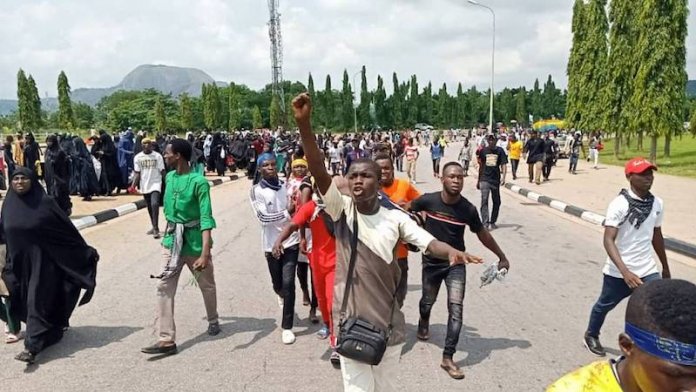 The Peoples Democratic Party (PDP) yesterday lamented what it described as the continuous killing of Nigerians in avoidable bloody clashes in various parts of the country, particularly the preventable skirmishes between the police and protesters in Abuja last Monday.

The PDP said in a statement signed by its National Publicity Secretary, Kola Ologbondiyan, that it is heartbroken that the misrule of the President Muhammadu Buhari-led All Progressives Congress (APC) administration has gradually turned various parts of the country, including the federal capital, into arenas of violence and bloodletting.

“Our party is particularly saddened by the death of an innocent National Youth Service Corps (NYSC) member attached to the Channels Television, Mr. Precious Owolabi, 23, who was shot during the Monday bloody clash between the police and protesters in Abuja.

“Indeed, our hearts reach out to his family at this moment of grief.

“The killing of Owolabi as well as the avoidable deaths of other compatriots, including a Deputy Commissioner of Police, is indeed another sad commentary on the irreplaceable losses and anguish families in Nigeria have continued to bear under the APC government.

“The PDP believes that President Buhari has not demonstrated adequate capacity and commitment to effectively manage our national affairs and put measures in place to ensure a stable, united, equitable and secure Nigeria.

“Also, the APC has shown that it is completely unpatriotic and only out to destabilise our country for its selfish reasons,” the statement stated.

The party, therefore, called on all Nigerians to explore necessary avenues available in a democracy and the 1999 Constitution (as amended) “to raise a voice of lamentation on the state of our nation under the misrule of the APC.”

It explained that “certainly, no nation can thrive in an atmosphere of persistent violence, bloodletting and siege mentality on the citizenry,” noting that had President Buhari indeed given the smallest consideration to the continuous wise counsel by well-meaning Nigerian leaders, including former presidents as well as international bodies, on the security challenges confronting the country, it would have
been reduced to the barest minimum.

The PDP, therefore, charged President Buhari to listen to the voice of reason, arise and take immediate steps that would put to an end to the violence ravaging the country.

In the same vein, PDP in the statement said APC must end all its manifest anti-people tendencies, noxious body language and acts that promote impunity and lawlessness in the land.

It therefore called on the National Assembly, as true representatives of the people, to immediately rise to the occasion by taking urgent legislatives steps to unravel how last Monday protest led to the death of yet-to-be-ascertained number of Nigerians.