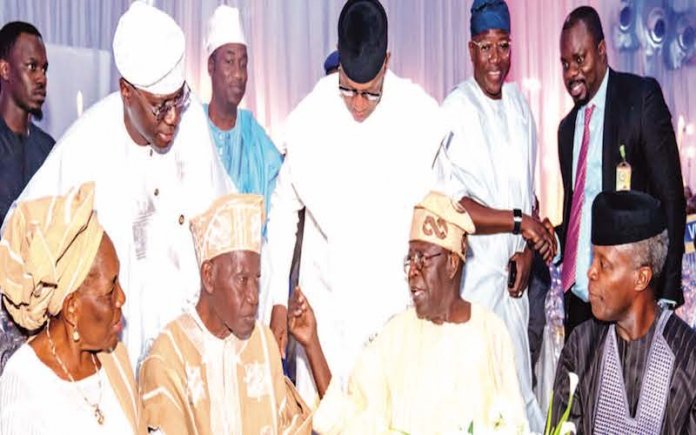 They all described him as a core progressive and visionary leader, whose achievements would continue to serve as the foundation for the development experienced in Lagos since the creation of the state.

They made the remarks yesterday at Jakande’s 90th anniversary held at the Haven Event Centre, Ikeja GRA with political leaders across the state trooped to celebrate the state’s first civilian governor.

At the celebration, Osinbajo acknowledged Jakande’s revolutionary and transformational figure in the country’s history, saying he “is a man, who was able to do several revolutionary things, beginning with the change of the education system in Lagos State and that is home of the country.”

The vice president noted that Jakande’s education policy kick-started the development currently being used as a benchmark for every government in the education sector.

“The free education policy in Lagos during his tenure was transformational in the sense that it stopped the shift education system which is morning and afternoon and became the single system.

“Through this policy, thousands of children in the state had the opportunity of going to school.”

He said Jakande’s strategy “to reduce housing deficit changed the real sector, saying he built the largest number of housing projects by any state government in one circle, including even the federal government, was built under the Jakande administration.

He, also, said his style of governance was cerebral because he showed that the government existed to cater for the needs of the citizens.

While addressing the congregation, Tinubu disclosed that governors after the celebrant, including him, often referred to documents containing how he addressed challenges in the state.

“Many of us in Nigeria, especially Lagos are very happy today. Papa is the foremost progressive that anyone can find in the continent. He has achieved many first at the time it was extremely difficult to rule in Nigeria.

Also at the celebration, Osoba said the remarkable achievements of the nonagenarian qualified him for national honours.

Osoba lamented that it was unfortunate that the federal government had honoured those who did not contribute meaningfully to the country’s development while people like Pa Jakande had not been honoured.

“Today, our celebrant does not have a deserved national honour when peoples of lesser contribution strut around the country with high honours. It is my recommendation that Baba Jakande should be given nothing lower than the national honour of commander of the federal Republic.

The former governor also lamented that the celebrant had not written a his memoir to correct some notion in the public domain.

“The thinking was that Pro-June 12 supporters should have a foot in the government. Many may not remember that Jakande alongside Dr. Olu Onagoruwa and Alex Ibru were in the vanguard of those who worked for MKO Abiola’s bail, which, unfortunately, he was prevailed upon by his lawyers not to accept at the last minute. We will never know what course history would have taken if Abiola had taken that bail.

In his goodwill message, the state governor, Babajide Sanwo-Olu had directed that the over 400 housing units in Igando, Alimosho Local Government Area would be name after the former governor as Alhaji Lateef Jakande Garden Estate.

He justified the need for the plan, noting that Jakande “has become a national name. When you say Jakande, it is synonymous with development whether in education, water, housing, public transportation, and it is a name nobody can toy with. The housing estate will be declared open by the nonagenarian to further show his contribution to the real estate sector.”