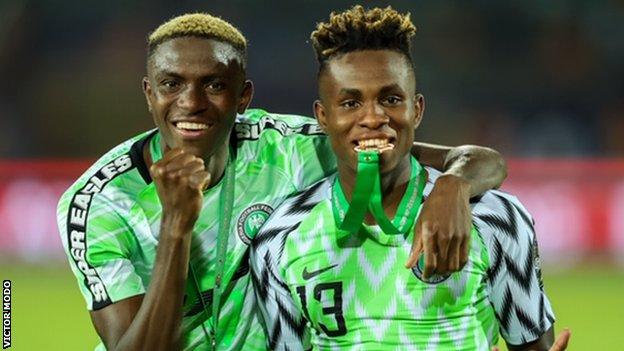 The duo were part of the country’s Under-17 World Cup winners in 2015 and both starred as the Super Eagles sealed a third place finish in Egypt on Wednesday.

Chukwueze, 20, made six appearances in Egypt and opened the scoring in a man-of-the-match performance against South Africa in the quarterfinal.

I know with our squad we are capable of winning this competition in the future, and I really want to be a part of that

“When you pick up a medal in your first major tournament it is a positive sign of bigger things to come,” Chukwueze, who has played for his country at all levels, told BBC Sport.

“Not so many young players get the opportunity to be in the Nigeria squad and even get a chance to play.

Chukwueze – who came close to joining Arsenal in 2016 – arrived at Villarreal from Nigeria’s Diamond Academy in August 2017.

His first season in the Spanish La Liga has seen him being likened to his hero and former Netherlands international winger Arjen Robben.

But after making a solitary appearance in Egypt and completing a permanent move to Charleroi from German side Wolfsburg, Osimhen is focusing on the future.

“Words are not enough to describe this feeling. I’m quite overwhelmed. We wanted the trophy, but this bronze medal is a sign that the future is bright and we are looking forward to it,” he told BBC Sport.

“I was looking forward to playing for my country, it’s a great feeling for me and my family. I thank the coach for the opportunity and I want to build on this.”

His 10 goals at the U-17 World Cup four years ago eclipsed the previous best of nine set by Ivorian Souleymane Coulibaly in 2011 and Florent Sinama Pongolle of France in 2001.

Osimhen was also part of the Nigeria side that won the Under-23 Africa Cup of Nations in Senegal in November 2015, which also qualified them for the 2016 Rio Olympics.

His exploits saw him crowned the 2015 Confederation of African Football (CAF) Youth Player of the Year.

He has played for Nigeria at all levels, from under-17 to the full senior side, for whom he has won three caps.