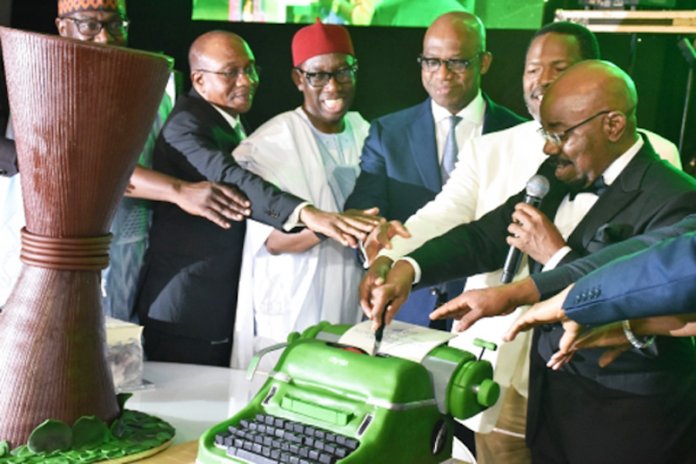 At 60, the glitter and gloss of bullion blocks pale to the radiance of Prince Nduka Obaigbena, Chairman of THISDAY Newspaper/ARISE Television. Hardly a middling creature, Obaigbena effortlessly surpasses the shimmer and allure of overstated praise. He epitomises merit and affluence with indescribable allure. He’s got a heart of gold too. This is understandable for a man, who challenged resolve with steely grit and exploited the arduous planes of ambition and toil till he encountered grandeur at the crossroads, where wild contemplation and hard work morph into triumph. For two days, last week, Lagos stood still as the cream of the Nigerian society trooped out to celebrate with ‘The Duke of Journalism’ as Obaigbena is also known as he celebrated his 60thbirthday, writes Lanre Alfred

There were former Governors of Delta and Cross River States, Dr Emmanuel Uduaghan and Donald Duke and wife, Onari, respectively; CEO, Nigeria Export Processing Council, Mr Segun Awolowo, Jnr; former Nigeria’s High Commissioner to Ghana, Senator Musiliu Obanikoro and former Secretary to the Lagos State Government, Mr. Tunji Bello, among others. It was a lively session of hymns and words of exhortation as the service also coincided with the church’s harvest. Thereafter, guests were treated to a sumptuous reception at the Sky Restaurant of the prestigious Eko Hotel, Victoria Island.

A Festival of Life and Spectacular Rhythm…
As the rays of dawn streaked through the Victoria Island skyline last Monday, it was evident that that day was going to be a total departure from the drudgery of everyday life in Lagos. Indeed, time did not stop that Monday evening, it only moved sideways for the colourful publisher to be feted by powerful and preeminent Nigerians and other nationals.
For a man that has been in the corridors of power for over three decades by virtue of his stellar media adventure; and who has hosted some of the biggest events Nigeria has ever seen like the THISDAY Music Festival, The THISDAY Awards and the Arise Fashion Week among others; it beggared no misgivings that his milestone birthday party would be intimate, yet extravagant.

The A-List roll call of guests was unprecedented but not totally unanticipated. It was typical of Obaigbena, who chose to party like a billionaire. Don’t blame him; his friends cut across billionaires and bank owners, entrepreneurs and entertainers, celebrities and aristocrats and they were all there in their finery to felicitate with a man, who singlehandedly reinvented the African media landscape.

At ‘The Rain Forest’
On that day, Eko Hotel transformed to a never-seen-before residence of fun and joie de vivre. Security within and around the hotel was beefed up as nobody was allowed 10metres to the gate without a verifiable access code. The venue proper would have inspired the best of lyricism in an accustomed poet as it was garlanded with carven imageries of arcs and flowers, and bunches of knot-grass, offering an ambience of splendid dyes and luxury, which titivated like the damasked wings of the tiger-moth.

Aside the greenery, the dangling chandeliers complemented the revolving disco lights to give the entire ballroom a cosy ambience. Adorned in the most exquisite finery, the carefully selected guests strolled into the venue and the waiting arms of very pretty ushers, who led them in smilingly and straight to a designated area decorated with plenty of foliage and a water fountain, where choice cocktails were served.

The champagne cocktail proceeded smoothly and calmly as it was proficiently convened with commendable civility and grace. Every guest was given the royal treatment as they were treated to the choicest brands of champagne – from Ace of spade, Don-Perignon, Crystal and Cognac to Moet & Chandon. For teetotallers, there were non-alcoholic wines and fruit juices complemented by assorted finger foods and desserts.

As some guests wined, dined and mingled, others swayed and shuffled to the soulful medley of old and contemporary music, which moved and transported them to euphoric cusps. The talking point for many guests, however, was the facade of a rain forest created inside the venue.

As the party kicked off, the venue shook from the base to the rafters as the deluge of encomiums and applause caused its hallowed chambers to tilt in Obaigbena’s honour. Politicians shook hands with corporate players; top bankers embraced top celebrities, former governors and incumbent governors back slapped, and everyone wore a happy smile as they revelled in the jollity.

In spite of the fact that the next day was a Tuesday, many were willing to go on forever, no less, because Obaigbena is a true man of the people, who occupies a soft spot in the hearts of his most trusted business and political associates. Thus, his 60th birthday manifested as a worthy testament to his enduring popularity and acclaim.

Effortlessly, he bowled everyone over with his infectious candour and charisma. People who know him well never got tired of purring odes about him on his account of his contribution to humanity, entrepreneurship and journalism. He made new friends and converted new disciples with the event.

How Toni Braxton, Tiwa Savage, Wizkid Lit Up the Venue
As the woofers belted out familiar, evergreen tunes, guests literally tipped over in merriment – their joy spilling from their souls into the air. Enthralled, they moved in gaiety, tap dancing and swaying to the beat as if they meant to enact a madhouse jamboree with the tenacity and agility of veteran dance and music buffs. The surprise of the night was the introduction of popular American R&B singer and songwriter, Toni Braxton.

Song after song, the songbird took many on a journey through her vintage repertoire, leaving them swooning and screaming in reminiscence of days gone by. In the middle of her ‘Breathe Again’ performance, she left the stage and walked to the VIP section, where the celebrant was in the company of dignitaries.

Though Braxton had earlier greeted and congratulated Obaigbena on his birthday celebration, this time around, she sang specially for him and his friends, eliciting screams of excitement from the audience. The 90s music star initially took a bow with ‘Unbreak My Heart’ but was recalled for an encore, which she gladly obliged.

Braxton’s visit to Nigeria for Obaigbena’s birthday celebration is another testament of his super taste and panache. Not one to do things in half measures. He threw all in the ring for a splendid celebration. Nigerian crowd-pleasers, Tiwa Savage and Wizkid also thrilled the elitist gathering with memorable performances.

A Pause for Dapo Abiodun’s Speech
Since his emergence as the Governor of Ogun State, Prince Dapo Abiodun has not stopped at surprising people with his oratorical prowess and razor-sharp intellect. He did so again at the party as he spoke so well about Obaigbena, describing him as the best thing to have happened to Nigerian nay African media.
He said, “Nduka is a man of many firsts and as the President of the Newspapers Proprietors Association of Nigeria, and a publisher, his contributions to the entrenchment of democracy are legendary and worthy of documentation for posterity and historians. We cannot forget also how he revolutionised print journalism and took THISDAY Newspapers to its present height. His type is rare and we can only wish him continued successes, good health and long life.”

THE MAN, NDUKA OBAIGBENA
The story of Obaigbena’s life is not as smooth as a bowling ball gliding on a varnished lane. It is the story of a man, who flailed and floundered against the maelstrom and headwind of a tempestuous home-grown economy but whose resilience and steadfastness kept on the straight and narrow path to fame and fortune.

Call him one of those rare individuals, who strive to always take a high road and position themselves for success regardless of the obstacles before them, and you won’t be wide off the mark. As far as business ideas and innovations are concerned, he turns nothing down, except the collar of his shirt. The Duke has, in the process, created innumerable employments and wealth through his journalistic and entrepreneurial initiatives and excellence, which have significantly impacted the socio-economic and political stability of Nigeria.

Obaigbena’s path to acclaim didn’t lie out in flat miles; it’s the imagination with which he perceives the world and the gestures by which he honours it that stands him apart.
Unlike many of his peers, his rise to eminence was as much a product of unrelenting will and his astounding ability to pirouette himself from obscurity to entrepreneurial acclaim by the bootstraps.

Arguably, only a negligible number of journalists, whether African, Caucasian or Arabian has had the opportunity of crisscrossing the world royalty-style like The Duke! In just a lifetime, he has seen the moon shine and dusk fall on all the continents of the world.
Over the course of three decades, he has built a media empire that is as intimidating as it is inspiring. Feared and courted by rulers and leaders in politics and business and every other imaginable sphere, the Creative Arts graduate of the University of Benin (Edo state) had nurtured to profitability and prominence his own magazine before many of today’s presumptive media moguls understood the difference between byline and deadline. And, his glamorous birthday party, which ran till the early hours of the next morning would remain for a long time the benchmark for other billionaire parties.