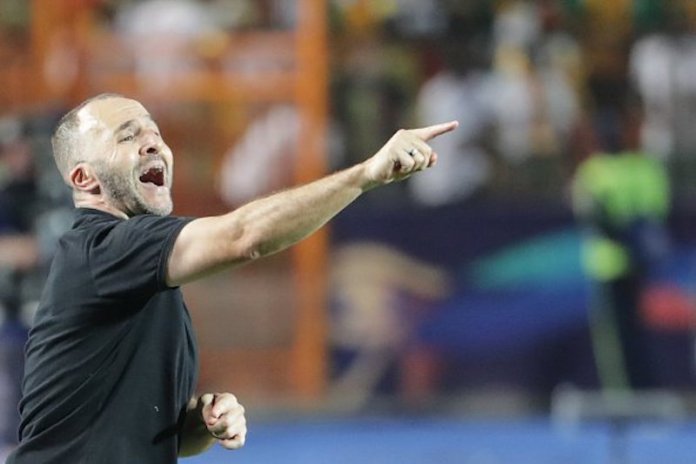 Algeria national team manager Djamel Belmadi said that he hasn’t seen any Egyptian fans supporting them during the 2019 AFCON final.

The Desert Foxes lifted their second-ever AFCON trophy after narrowly beating Senegal 1-0 in the final on Friday night with striker Baghdad Bounedjah scoring the fastest goal in an AFCON final after just 79 seconds.

Following the win, Belmadi was asked what he thought about Egyptian fans who supported his team but he responded: “I’m going to have to go to the eye and ear doctor when I get back home, because I didn’t see that.”

Both fans had already clashed during the semi-final game between Algeria and Nigeria when Algerian fans attacked some Egyptians supporters who celebrated the Super Eagles’ goal.

According to CAF officials, Algerian fans in Category 3 threw water bottles at some Egyptian supporters staying in the East Stand and tried to climb the barrier to attack them in the 72nd minute after some of them celebrated Odion Ighalo’s penalty equalizer for Nigeria.

Following the incident CAF decided to fine the Algerian FA $10.000 before retracting the punishment.

Many Egyptians here in Cairo would have wanted some other team but fierce Arab rivals Algeria to win the tournament.

Nigeria’s Super Eagles became the adopted team of most Egyptians after the Pharaohs crashed out in the second round.

Belmadi took charge of the Algerian national team in August 2018 after they failed to qualify for the 2018 World Cup and were eliminated from the 2017 AFCON group stages, under several managers including legend Rabah Madjer.

In his 16 games in charge, the 45-year-old guided them to 12 wins, three draws and just one defeat against Benin in October 2018 in the AFCON qualifiers.