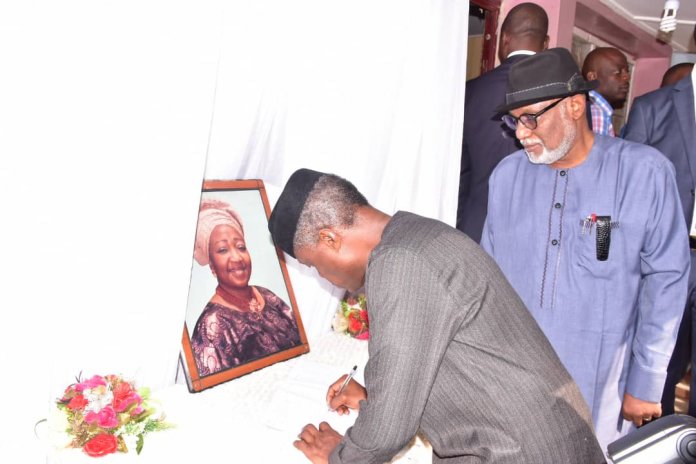 James Sowole in Akure
Against the backdrop of blaming most cases of kidnapping, killings and robberies on activities of herdsmen, the National Leader of the All Progressives Congress (APC), Asiwaju Bola Tinubu, Sunday warned against sigmatising any ethnic group or tribe.
Tinubu’s warning came as the Vice President, Professor Yemi Osinbajo,
said intelligence gathering and Community Policing were major options to tackle insecurity ravaging the country
The duo of Osinbajo and  Tinubu spoke separately  Sunday in Akure, Ondo State, when they paid a condolence visit to Chief Reuben Fasoranti, the Leader of the Pan Yoruba Socio Political Organisation, Afenifere on the death of his daughter, Mrs Funke Olakunrin.
Mrs Olakunrin was on Friday killed by gunmen suspected to be Fulani herdsmen at Kajola on Ore- Sagamu Expressway.
Accompanied by the former Interim National Leader of  the APC, Chief Bisi Akande, and other party chieftains, Tinubu pleaded against allowing the incident to divide the people of Yorubaland.
He said: “I am extremely concerned about security, i don’t want a stigma, I can go through history of kidnapping in Nigeria and we know how and where  it all started, there are a lot of copycats.
“How many years ago, have we faced the insecurity in the country? There are cases of kidnapping, is Evans too who was arrested and made disclosures, also a herdsman? I don’t want to be political, but I will ask where are the cows”.
“The incident that affected one member of our family, Mrs Olakunrin, is seriously sad, and unacceptable but nobody can return her alive, she has answered the call of her creator.
“We must not use this incident to divide ourselves but we must use it as a cure to the security problem.”
The APC leader stressed the need for additional police and security  patrol reinforcement along  Ore road and various flash points across the country.
“The security challenges are numerous across this country and to fight it we are going through that, more police are being recruited and it takes time to train and deploy them to various areas, nobody prepares more than necessary for this.
“But if you look at Zamfara, Osun, Ondo, Ekiti and all areas, then we need to fight poverty, unemployment and the causes that might lead people to crime.
“Equally we must create opportunity to convert this tragedy to prosperity.
“The security concern and challenge right now must be faced squarely throughout Nigeria,” Tinubu said.
Osinbajo described the killing of Mrs Olakunrin as a massive tragedy.
He said: “As you all know, the President has very recently met not only the service chiefs but also the IGP and he has laid out a new policy of community policing.
“One of the most important things in this sort of crime, because they are largely economic crimes, people try to make money by kidnapping.
“One of the most important things is intelligence gathering that is why we have the community policing system where policemen would be trained in their own local government and they would remain there.
“This is as close as we get to the community policing structure that we expect to have.
“The other thing of course is that we also are engaging the Army so that there will be a bit of more military presence especially along the road.
“The Inspector General of Police has already committed to ensuring that there is full coverage of the police and even helicopters to fastening the search for these killers and also to ensure that there is adequate presence to deter this kind of terrible situation from reoccurring.
“We are looking at the whole security architecture and trying to ensure that we are able to scale up and ensure that we are able to protect the lives and properties of Nigerians.
“Security in a big country like Nigeria as you can imagine the challenge is dynamic and  we also have to be consistently dynamic in ensuring that we are able to beat the challenages as they appear.
“I think that we can  be very hopeful that we would see peace and calm as some of the steps we are taking come into fruition.”