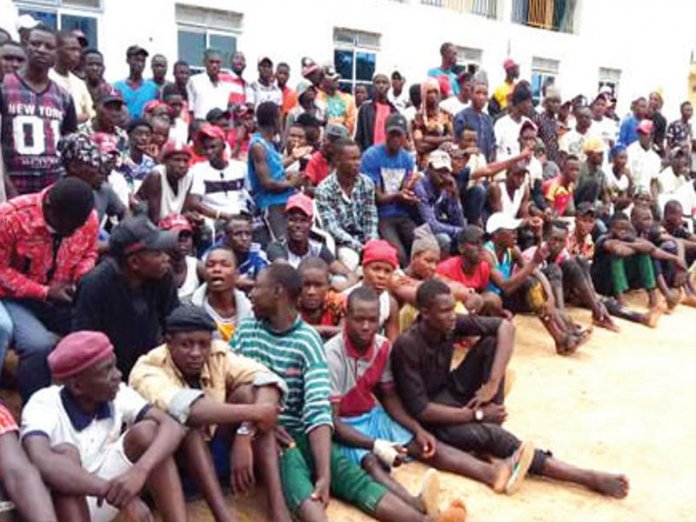 No fewer than 500 members of Sara-Suka, a deadly group of political thugs, have renounced their membership and dropped dangerous weapons pledging to be law abiding in Bauchi state.

The Commissioner of Police, Mr. Habu Sanu disclosed this at a meeting with journalists yesterday at the command’s headquarters, Bauchi, noting that he was delighted the political laid down their arms.

The commissioner pledged that the police would continue to support them as they undergo rehabilitation to become better citizens.

He said since the command implemented its crime-fighting strategy, a lot of criminal activities in the state had been checkmated and suspected criminals connected to Sara Suka, armed robbery, kidnapping and other violent crimes were arrested.

The commissioner added that a large number of arms and ammunition and other dangerous weapons were equally recovered between the month of May and July 2019.

He said “As part of the action plan, the command sets out a goal that will give emphasis of not only arresting and prosecuting the Sara Suka thugs and other criminals but to also investigate the root cause of the menace in order to take decisive action that will lead to the total eradication of the problem”

“To that effect, the command through coordinated Puff Adder Operations which involves all its tactical and operational units successfully cracked down many notorious Sara-Suka gangs and arrested most of their members including those supplying them dangerous drugs.”

He noted that the youths engaged in Sara-Suka “are creative and have a lot of potential in life if their current situation bus well managed.”

He added that the command door “is still open to those who are yet to repent to see reason why they should tow the same line as the command will not rest on its oars in the sustained fifth against crime and criminality in the state.”

THISDAY had reported that among the repented youths include 294 who are skilled in various trades, 31 students and 170 are unskilled.