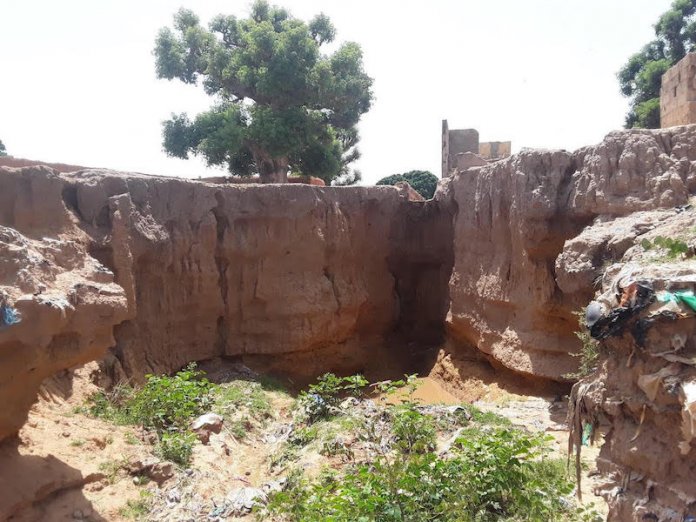 Residents of Matazu Local Government in Katsina State are facing imminent extinction due to the devastating effect of gully erosion in their communities. Francis Sardauna writes on the need for state and federal governments to hearken to their cries for help

For residents of Shantalawa and Ungwar Malamai communities in Matazu Local Government Area of Katsina State, gully erosion has become a real threat to their lives and property.

The scenario started about 10 years ago as nothing more than a pothole and soon, it became deep enough for a man to stand in. Today, the gully is about 100 feet deep, covering a distance of over one kilometre. It runs through the communities carrying away sewage in the open and threatens to expand further almost on a daily basis.

There are fears among residents that their houses could one day cave into the gully, and with thousands of children living in the affected areas, fears are heightened that residents, especially minors, could fall down the gully or be swept along like sewage.

Their fears are not unfounded. According to residents, no fewer than five persons have died in the last ten years after falling inside the gully and at least 10 houses have been submerged, while many people have been rendered homeless in the communities.

Our correspondent who visited the communities reports that Bin-Bas Nursery and Primary School in Shantalawa and the house of the Transition Committee Chairman of the council, Kabir Faruq Matazu, were on the verge of collapsing as farmers in the agrarian communities have also been adversely affected by the situation as their farmlands suffered severe erosion.

Residents Lament
A teacher with Bin-Bas Islamiyya School, who pleaded anonymity, said they have been completely helpless as erosion continues to threaten their lives and that of their pupils, adding that school activities were now at the mercy of rainfall.

“It has been disrupting our educational activities. Once it rains, school activity is put on hold. Something need to be done by both the state and federal governments urgently to address this ugly threat”, he added.

A resident of Shantalawa, Isyaka Ibrahim, told THISDAY that the gully was already causing huge cracks to run along the walls of his house, adding that the natural disaster had separated him from his neighbours forcing him to be passing through farmlands behind his house to go in and out.

He said community members made several attempts to check the erosion in its early days before it worsened beyond what they could fix on their own, “I want the government to urgently check this erosion menace in our community to forestall other problems that might arise if they continue to neglect it”, he reiterated.

The 60-year-old man who could not control his emotions added: “we have made a lot of efforts to check the erosion. We planted trees on the route to check it and also contributed money, which was used to buy sandbags to stop the erosion, but they didn’t work.

“Now it has gone beyond us; we need the government to come in immediately because we cannot sleep soundly again, especially when it is raining as we fear that our houses might be swept away. Each day, we realise that the gully is getting closer to the houses and causing cracks to run along the walls.”

According to Ibrahim, they have written severally to the local and state governments on the need to find a lasting solution to the impediment bedevilling them “but all the promises they make during political campaigns are jettisoned once they get into office”.

Similarly, a farmer in Ungwar Malamai, Idrisu Matazu, who corroborated Ibrahim’s view said, “All the efforts we put into farming are not yielding any result again because once it rains, everything is gone, our farmlands will be covered by sand”.

He added: “This is why we are calling on government to come and assist us and check this erosion because the gully has even extended to our community school and farmlands. Our houses are also on the verge of being swallowed by the gully.

“A lot of people have died in the gully. If nothing urgent is done to solve the problem this year, many families will lose their homes to the gully, which is already threatening to swallow their houses. We have been organising a community fundraising programme to help ourselves, but the situation at hand now is beyond the capacity of the community.”

Matazu lamented that the community has been neglected by successive governments despite having a “huge voting population” during elections.
He therefore urged the state government to urgently come to the aid of the residents, while calling on worthy individuals and international agencies to also intervene.

Another resident, Mrs. Yahanatu Tijani, said rural dwellers are those producing what people who reside in the cities consume but the gully and the bad state of the road have become a burden for farmers to get their farm produce to the city to sell.

She explained that the gully erosion has divided the community into two, adding that: “we can’t access one part of the village without going up to the village square and passing through the primary school. We now live in fear because of the rate at which erosion eats up our houses. Many have been forced to abandon their houses, while some have lost property worth millions of naira to the erosion. We do not know what else to do than to cry out”.

She, however, called on the federal government through ecological fund office and the Nigeria Erosion and Watershed Management Project (NEWMAP) to come to the rescue of the affected communities.

Government Reacts
When contacted, the Transition Committee Chairman of Matazu Local Government, Kabir Faruq Matazu, said government was aware of the gully erosion problem, but that it fell within the projects to be handled by the federal government through NEWMAP.

He added that the agency had assured the state government that the contract would be fully executed, reiterating that he would work assiduously with the agency to do some maintenance work on the gully to avert further loss of lives and property.

The chairman admitted that there were numerous sites affected by gully erosion in the council and “we wrote to the state government and luckily enough the governor approved the construction of a bridge that links Shantalawa with our government day secondary school. We are having financial challenges in the local government and even at the state level but as soon as the situation improves, more development projects will be done to assuage the problem facing our people”.

Matazu reaffirmed that the state government under the leadership of Governor Aminu Bello Masari has spent billions of naira on erosion control, urging the federal government to come to their aid because the natural disaster “is getting beyond our control”.

The local government boss however enumerated some of his achievements to includes the construction of feeder road from Farin-tafki to Saura village, employment of over 50 casual staff, rehabilitation of Ilela primary school and Gorji primary healthcare centre.

Not Yet Uhuru
But a credible source from the state NEWMAP office, told our correspondent that the agency had numerable project sites but Shantalawa and Ungwar Malamai communities were not included.

He however expressed optimism that the communities might be included in subsequent projects, adding that the designs for Funtua, Malumfashi and Katsina water storm drainage schemes have been completed and approval has been given by World Bank.

“Other sub activities ongoing in the state includes the drilling of boreholes, installation of overhead tank, construction of perimeter fencing, installation of solar powered boreholes in Maiadua local government which is about 52 per cent completion.

“It is important to note that with the arrival of NEWMAP in Katsina State, infrastructure will be saved from collapsing, lives and living standard of community members will also improve. It is expected that more successes will be recorded as implementation advance”, the source explained.

According to him, NEWMAP has beyond reasonable doubt alleviated the plight of many Katsina residents since it inception and would continue to do more as soon as World Bank release funds for the commencement of other projects across the state.