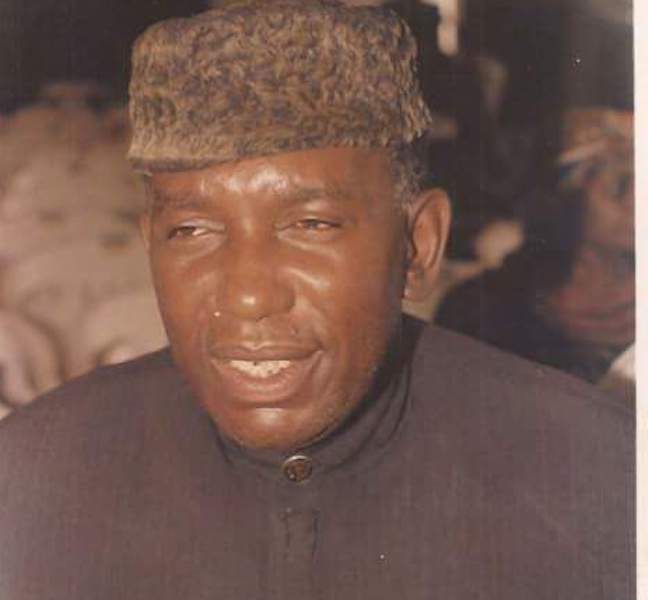 A new book, which will be launched on Tuesday, July 16 in Abuja, offers fresher intimate perspectives on the life and times of a former Judge of the International Court in The Hague, his son and author of the book tells Okechukwu Uwaezuoke

“An intimate and penetrating insight” into the life of the legendary legal luminary Charles Dadi Onyeama should interest avid readers of recent history. That exactly is what Enugu-based Delta Publications (Nigeria) Limited offers with a new 272-page book, titled DADI: The Man, The Legend – His Excellency Judge Charles Dadi Onyeama of the International Court, The Hague: An Intimate Portrait.

The book, which contains 48 pages of nostalgic photographs of yesteryears that tell so many touching stories written by his son Dilibe Onyeama, will be launched on Tuesday, July 16 in Abuja at the National Centre for Women Development. The book launch, which will be chaired by the former Secretary-General of the Commonwealth of Nations, Chief Emeka Anyaoku, is expected to attract a motley crowd consisting of legal practitioners, politicians and bibliophiles.

Indeed, the book’s publishers described Judge Onyeama as “the best known ‘unknown’ jurist ever to serve his country”.
Qualifying the word “unknown”, the publishers write: “…Surely, outside the pot-pourri of perpetual media spotlight, outside the hallowed halls of justice, outside the drama of courtroom battles at The Bar and on The Bench, Judge Onyeama has essentially remained an enigma, an unknown quantity. No real effort has ever been embarked on to put a human face to this revered law man.”
A previous biography on the legal titan, titled Eagle on the Bench, written by a lawyer called Ikeazor Ajovi Akaraiwe did not go that far. Rather, the book, which was reissued and expanded in 2001 by Delta Publications, focuses essentially more on his jurisprudence than on his personage.

But the new book, authored by his son Dilibe Onyeama, humanises this larger-than-life public figure, who meant different things to different people. To his bosom friend and contemporary at the prestigious King’s College, Lagos, the late G. O. Kasali, who later became a federal government statistician, he was “the most fearless judge that this country has ever produced.”
And this assertion was not without reasons. For as a judge on the Nigerian bench in the late 1950s and early 1960s, the late Justice Onyeama had dared the lion in its lair by giving judgement against the then federal government in two separate landmark cases – one of which was upheld by the Privy Council in London. While this may not have endeared him to the then Tafawa-Balewa/Azikiwe-led government, it earned him the acclaim and respect of the masses, who saw him as a judge of unimpeachable integrity on whom they could always count to receive justice based on truth and the strength of evidence.

This perceived anti-government stance was explained away by a legal luminary Fred Egbe, who said asserted that his “greatest contribution was that he knew, unlike many of his successors, that a judge was an advocate of limited government and that this demanded that a judge must be mildly suspicious of the exercise of executive power.”
This was a view echoed by the late Supreme Court judge Sir Philip Nnaemeka- Agu, who believed that the career of Justice Onyeama was “one of the few appointments made at the highest level without the slightest taint of godfatherism.”

Interestingly, there was a failed motion filed in parliament by former Minister of Finance, Chief Festus Okotie-Eboh, to remove him as a judge. This betrayed the federal government’s apparent discomfort with his fearless disposition on The Bench. This, the late Chief Obafemi Awolowo analysed in his memoirs My March Through Prison with the following words: ““It is crystal clear that the Judicial Service Commission over which Sir Adetokunbo presided, had acted to keep Mr. Justice Onyeama out of the way. Because of the impartial and independent part he had played in the National Bank Inquiry episode, the powers that be obviously could not trust him. So they decided to remove him temporarily for twenty one days to be precise from the High Court of Lagos as acting Chief Justice, during which the assignment of the trial to Mr. Justice Sowemimo would not be open to question by any functionary in the Lagos High Court. In other words, Mr Justice Onyeama was appointed a Federal Justice twelve days before my arrest, and his appointment as such came to an end nine days after my trial had begun.”

It is a widely-known fact that Justice Onyeama’s career in jurisprudence climaxed with his elevation in 1967 to The International Court of Justice, The Hague, Holland, as the first Nigerian full-time judge to serve there. This was a man, who was nicknamed “the baby of the court” by his distinguished colleagues, because he was, and till date has remained, the youngest judge ever to sit in its hallowed chambers.

His overall performance during his nine-year tenure was summarised by Chief Justice Emeritus of Enugu State, Eze Ozobu, who noted “His dissenting opinion in the South West Africa case has remained a reference point in contemporary international law on the question of ‘testing the lawfulness of the origin of Act’. Renowned publicists of international law, including Soviet and international lawyers, in their various treatises have acknowledged his tenure at the ICJ as one that elevated contemporary international law to great heights.”
The revered late judge, who was born in 1916 into privilege, was the fifth of the 78 children of the late Paramount Chief Onyeama, who was crowned in June 1925 by the then British colonial administration with the royal title ‘The Okuru Oha of Agbaja’ (Native Authority), the largest Igbo sub-clan. The chief, the author of the biography discloses, doted on Charles Dadi above his siblings. This was in acknowledgement of the prophecy of a local seer that he would exalt the Onyeama family name on a larger-than-life scale that would traverse the whole world. The prophecy turned out to be uncannily the case.

Yet, an embarrassing newspaper report tarnished his hard-earned reputation among non-Igbos for the rest of his life. It was sometime in 1948, when Justice Onyeama was a 32-year-old young lawyer. He was socialising with his dear friends, Dr Henry A. Doherty, Bode Thomas, M. A. Ogun and a host of others, at the Island Club in Lagos. While they were drinking and trading good-natured banters, they also discussed politics. Soon, a heated debate on that day’s edition of The Daily Service – a newspaper with a largely Yoruba readership made popular under the past administration of Chief Samuel Akintola as its editor – ensued.

The newspaper’s vexatious article had alleged that the Igbo people were not only nursing the ambition to take over the Nigerian state, but also had bought up all the machetes in Lagos with which to exterminate the Yorubas. As the only Igbo clubber at the time, Onyeama replied in defensive jest, “You may despise the Igbo, you may persecute him all you want, but you can never put him down. You wait, Igbo domination of this nation is but a matter of time.”
Two days later screaming front-page headlines on The Daily Service proclaimed to the world: “IBO DOMINATION OF THE NIGERIAN NATION – A MATTER OF TIME” – IBO BARRISTER.

Since that episode, Justice Onyeama was put on the defensive for the rest of his life, forever having to dismiss the episode to hardened sceptics as innocuous club-room banter that was meant as a harmless jest.
Hence, his son Dilibe has risen stoutly to his defence in the about-to-be-launched new biography. “It was calculated mischief calculated to score cheap political points,” he says. “Some die-hard ethnic bigots during those pre-independence days merely wanted to vent their paranoia over perceived Igbo take-over plans and found a convenient scapegoat on an Igbo lawyer.

“Dadi was a regular member of the great Lagos social life in those days. I know it is said that many a true word are spoken in jest, but his Yoruba friends well knew that he was the last sort of person to harbour negative ethnic sentiments. Not only was he essentially apolitical, but Dadi was a one hundred per cent detribalised Nigerian. Most of his Nigerian friends in life – some ninety per cent of them, cut across the other ethnic groups, most especially the Yoruba and Europeans; and his true Igbo intimates could be counted on the fingers of just one hand. Admittedly, it was his miscalculation to crack such an expensive joke; but it was a mere zestful reaction to the bombardment that was being hurled against all Igbos, which was ill-considered because he was the only Igbo in the club at the time, and he was an exceedingly popular member of The Island Club.

“As it turned out, he was never allowed to live down that remark, and his towering personage was inextricably interlocked with anti-Igbo paranoia that haunted post-independent Nigeria, especially after the first coup that was perceived widespread as being an Igbo conspiracy. I devoted several pages in my book to highlighting both the background details that brought about the vexed debate and the consequent instinctive animosity that other ethnic groups nursed against anything Igbo. Even many Igbos have never forgiven my father for making that remark.”

On the book, Dilibe Onyeama hopes readers would be inspired enough to cherish the virtues of integrity, the dignity of a good name, and fearlessness in projecting the truth. These were the virtues, the late Justice, who was awarded the Commander of the Federal Republic by the federal government in 1981, embodied. Indeed, they also earned him a Doctor of Laws (honoris causa) by the University of Nigeria, Nsukka and several law-related international appointments after his tenure at The Hague as well as Chairman of two federal government boards.
This latest biography on him promises to be one of the most interesting books by Delta Publications, which has now published 27 books on different subjects, mainly fiction and biographical study. The publishing house, which survives through novel creative sales strategies, has about 600 titles on its list.