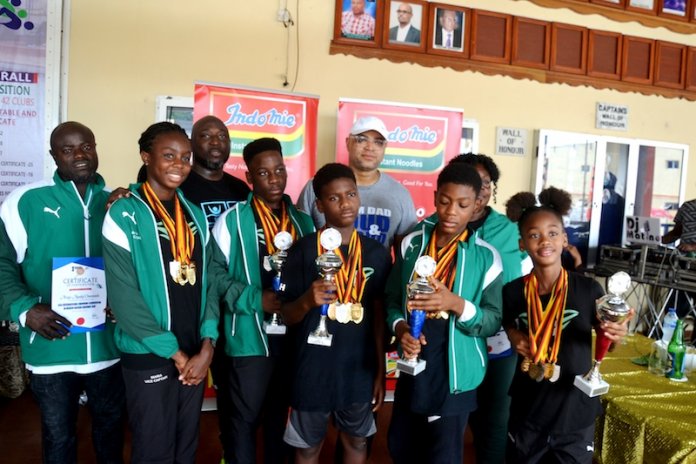 The Swimming Section of Ikoyi Club 1938 witnessed a glamorous Sunday as the club staged a reception party in honour of the victorious swimming team that emerged winners of this year’s Neptun-Nehein Swimfest in Arnsberg, Germany.

It was an amazing day for the swimmers who maintained the country’s number one position at the Swimfet meet. Nigerian team emerged champions back-to-back-to-back between 2017 and 2019.

The young swimmers from the club amassed 42 gold, 48 silver and 27 bronze medals to beat other swimmers from 11 countries from various parts of the world to the number one position.

The chairman of the swimming section of the club, Oloyede Obatoyinbo, said he was elated about the development which is a big boost to the talent development drive of the club.

Prizes were given to some of the swimmers who excelled at the Germany event as a way of appreciating their efforts.

A young male swimmer, 11-year-old AbdulJabar Adama who won 11 individual gold medals and one relay silver was the best performer at the event.

“The way we are grooming swimmers here gives me hope that very soon, Nigeria will be competing keenly at continental and global stage.

“We are so proud of these young swimmers and will continue to encourage them to attain higher heights,” Obatoyimbo noted.