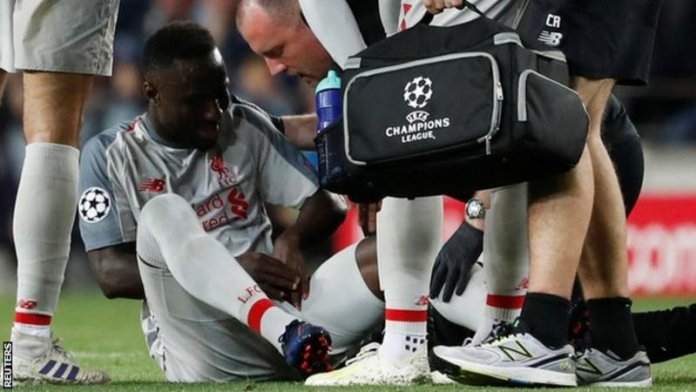 Guinea midfielder Naby Keita has left the Africa Cup of Nations in Egypt to fly to Liverpool to be assessed by doctors at the Premier League club.

The 24-year-old came into the tournament short of match fitness after suffering a serious groin injury.

Keita flew to England from Cairo on Sunday night after Guinea beat Burundi 2-0 to reach the knockout stages.

A team spokesman told BBC Sport Africa it is hoped Keita will return to Egypt on Wednesday.

“Yes, he has gone for a medical consultation (at Liverpool) – as you know he was the victim of a lot of heavy challenges in the game against Nigeria,” Mamadou Camara, the Guinea press officer revealed.

“So he consulted with medical staff over there [at Liverpool] and they asked him to come back for two days.

Keita did not start Guinea’s opening Group B game, a 2-2 draw with Madagascar, but did appear as a second-half substitute, coming on after 62 minutes.

Keita did then begin Guinea’s second game against Nigeria but lasted only 70 minutes before being substituted and has not taken to the field since, forced to sit out Sunday’s key victory over Burundi.

“After so many heavy tackles, the coach withdrew him before the end of the match and the day after, he was examined here and he tried to do some training but the medicine did not help relieve the pain,” said Camara.

“He picked this injury up in the semi-finals of the European Champions League and he has been training and playing but never at 100% and we have to think about after the Nations Cup.

“I don’t think he can play a full 90 minutes at the moment but if he can start and then be taken off that’s a very good thing.

“The manager will have to keep managing him as he has been doing.”

With four points from their three group games, Guinea have ensured their place in the Round of 16.

The West Africans will play the winners of Group D in the Egyptian capital on Friday.

Hosts Egypt are already through to the knockout stages, as are Uganda, Madagascar, Nigeria, Algeria and Morocco.

Meanwhile, police in Conakry have confirmed that Keita’s family home in Guinea was besieged by angry youths at the weekend.

“We sent a team of policemen to a house at Coleah in Conakry to restore calm after some youths attempted acts of riotous conduct in a house believed to be the family home of footballer Naby Keita,” a police source said.

Local media reported that the youths were venting frustration at one of Keita’s relatives who they believed had performed witchcraft, affecting the Liverpool star’s Nations Cup performances and increasing his recent spate of injuries.

Guinean press said Keita had denounced those “who want to divide his family”.