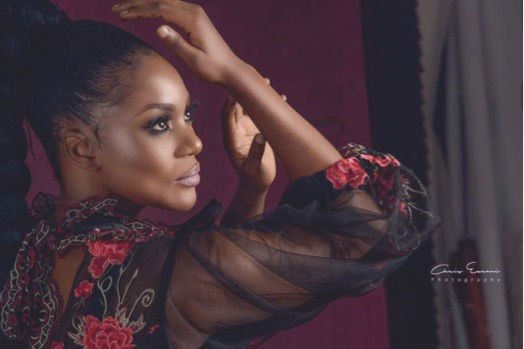 Nkiruka Omeili has a figure to die for. Her paradisiacal, dreamy eyes sparkle with brilliance and beauty. Filled with ebullience, she epitomizes excellence and diligence. With a warm heart, she expresses the essence of humanity with ease and compassion. Trained to operate in a theatre as a medical doctor, she has charted a new path for as a screen goddess that adorns the silver screen. Her story is replete with exhilaration, intuition, and devotion. From being an actress she has taken a leap to become a producer as she debuts with a feature film, ‘RUN’. Funke Olaode writes about the journey of a woman of substance and serendipity

She is a successful actress with an enviable academic record as a medical doctor at the prestigious University of Lagos. Nkiruka Omeili has a figure to die for. Her paradisiacal, dreamy eyes sparkle with brilliance and beauty. Filled with ebullience, she epitomizes excellence and diligence. With a warm heart, she expresses the essence of humanity with ease and compassion. Trained to operate in a theatre as a medical doctor, she has charted a new path for as a screen goddess that adorns the silver screen. Her story is replete with exhilaration, intuition, and devotion. From being an actress she has taken a leap to become a producer as she debuts with a feature film, ‘RUN’. The journey of a woman of substance and serendipity starts from her first step.

Charismatic and graceful, elegant and intelligent, Nkiruka popularly known as ‘Kiki’ would later find her niche in the world of make-believe. With a physique to die for, the 33-year-old Anambra native also possesses a high sense of fashion in or off the screen. She had a brief stint practising as a medical doctor, but her name resonates beyond stethoscope or doctor in white apparel attending to her patients, she is a Nollywood Diva.

She first came into Nigerians’ consciousness for her role as Lovette in the Television series, Lekki Wives. She also acted as Blessing in crime caper ‘Gbomogbomo’ Express alongside Gideon Okeke. Since then she has acted in several movies, carting away numerous awards. “When I decided to toe this path, I was just stepping out in faith because I knew that I had what it took. I didn’t know whether I would actually succeed but I had to try because I knew it was what I wanted to do.”

She might have stepped out in faith, her commitment to her calling and being true to herself is gradually paying off.
Kiki was initially fascinated to the arts as a child and one would have expected her to tilt her career towards that direction but Nigerians obsession with professional courses moved her to medicine. “It was a decision that was made based on the fact that professional courses were very popular at the time. They were the rave of the moment and every intelligent person wanted to go to the university to study Law, Medicine, Architecture or Engineering. That’s all it was,” she recollects.

Medicine is very time consuming and requires a lot of discipline and concentration, for Kiki, her love for medicine didn’t wane why looking for stardom in the arts. More than anything she gave all to medicine. “I wouldn’t say I combined it with anything else while in school. I would emcee the occasional programme or symposium and do a billboard shoot here and there but by and large, I was quite focused on my studies in school. So much so that I never sat for any exam twice. That’s something I’m still proud of till this day.”
She continued: “By that time I wasn’t pursuing both careers simultaneously. I was practising medicine both clinically and administratively but my passion was calling out to me so I made a conscious decision to pursue my passion and it meant medicine had to take a backseat while that happened. But I always say that I try to bring a little bit of medicine into whatever I do. For instance, my debut feature film production ‘RUN’ which is out later this year has quite a few things to teach health-wise.”

Kiki rise to stardom in Nollywood was slow but steady. She first landed a role at the first audition that she ever attended. And it was a lead role. Sadly though, that show never went past a pilot. Unperturbed, through determination and tenacity she has clicked to her dream. To hone her skills in an unknown terrain she attended classes and workshops and often relied on a few acting books. In her won word, ‘passion and talent probably had a bigger role to play in my story.”

Kiki as a Nollywood actor hasn’t jettisoned her early calling totally. She once hosted the health segment on Smooth FM Saturday Morning Show called “Balancing Life” where she teaches healthy living. “At the time I was trying to break into media by any means possible and whenever anyone in charge at the radio or TV stations heard I was a doctor, they wanted me to come up with a health show. So I did a demo of s health show and took it to smooth FM and they liked it. So I started doing the health segment on the show. It was quite an interesting start for me. I enjoyed doing it but when acting responsibilities became very time consuming, I had to give it up and focus on acting.”

Interestingly Kiki has blossomed as an actress, voice-over artists, emcee, etc. In 2016, she took a giant leap when she dabbled into production with a documentary ‘RUN’ directed by Uche Chukwu. How has the experience been surfing a tougher terrain? Her response: “To be honest, being a producer is a whole new ball game. As an actor, you give your best on a project and as soon as you are done, you walk away and the next time you know about the project is when it’s completed and ready for release. As a producer, however, you get to stay with a project from the inception to the finish and it’s really not easy in this terrain. There are so many things working against you but that’s no excuse to give up.”

Before the likes of Mo Abudu, Biola Alabi came to the scene, it is strictly a terrain for men. Does she think Nigerian women are doing enough? “I do think that Nigerian women are holding their own and have become a force to be reckoned with. These are very interesting times for Nollywood because the women are here to stay and are making their presence felt, one step at a time. I would say women are already changing the narrative. Earlier on you mentioned hardworking, powerful and intelligent women who are a force to be reckoned with and are doing big things in a world/field dominated by men. I’d say we are off to a good start.”

Most recently the Eko International Film Festival Award in 2019 for the best-supporting-actress and so many more. The secret she said is genuinely love what she does. To stay true to it, you have to love it. That’s the only way to give it your all and to persevere regardless of challenges.

A medical doctor turned actress, how has the knowledge as a medical doctor helped in her new pursuit?
“Apart from the discipline which I bring into my current profession, my knowledge of medicine always comes in very handy. People who do things properly consult me even when they are writing certain scripts to determine the plausibility of certain storylines. And like I said, I bring a bit of medicine into whatever I produce because I want people to walk away having learned something new after watching·”

From her obscurity as an undergraduate at Unilag 13 years as a medical student just trying to make good grades and graduate, fame wasn’t in the cards at all. But Nollywood has since thrown her off balance she had remained through to herself by shunning scandals. What she said has helped in that direction is being grounded the way she was raised and knowing what she wants are things that have informed her way of life and what she put out there.

“I know that many entertainers talk about a lack of privacy and it sounds like a cliché but it’s true. Practically everywhere you go, you are being watched so there are certain things you really cannot do in public? I really do believe that everything we go through in life serves a purpose as regards molding you into the person that you are.”

Kiki radiates beauty both within and outside. How does she stay beautiful? “I can’t take the credit for that one. I was born with it, although I do take care of my skin. No sleeping with makeup on and I cleanse and moisturize every day.”

When Kiki is not the beauty on location she relaxes in the cozy of her home by watching a lot of movies.
For those who might think her life revolves solely on medicine or the arts, Kiki’s passion goes beyond that because. If she hadn’t embraced the arts or entertainment industry she would have been a counselor for young girls or an activist for women’s rights generally.”

”I think this life is dynamic; my greatest fear is being a statistic. So I will keep evolving.”
With her eyes fixed into the future of Nollywood by continuing to act big roles and exhibiting her talents as a producer, has she finally bided medicine goodbye? Her response was quick.
“Definitely, not. Medicine is and will always be a part of me. It will always show up in whatever content that I am responsible for creating.”

While Nollywood may be difficult to break even Kiki believes her staying power will continue to be a vehicle that will drive her to excellence.
“My staying power will remain my passion for the job and my ability to give100 percent to whatever the project I am doing at any point in time. My ambition is to continually strive for excellence and to make and feature in movies that will educate as well as entertain,” she stated.