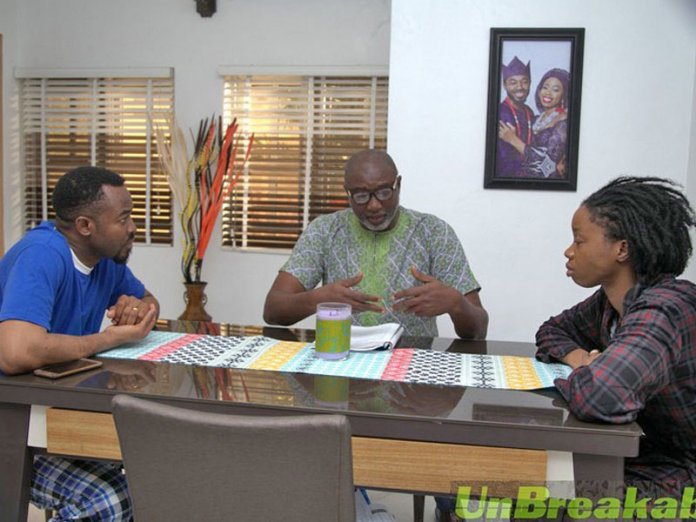 By Yinka Olatunbosun
A press preview of the movie, Unbreakable held last week at a private venue in Lagos hosted by the movie producer, Buky Campbell, a theatre-trained filmmaker. The movie starring O. C. Ukeje, A’rese Emokpae, Uche Mac-Auley and Richard Mofe-Damijo is an advocacy film that radically changes the usual narratives in Nigerian movie industry about mental health. Majority of Nigerian movies tell stories about mental health as a resultant effect of a past evil deed of a character. Most villains in our movies end up mentally ill; some good characters are portrayed as being under spiritual attack when mental illness strikes. While in reality, mental disorder is a health challenge that can be diagnosed and treated clinically.
In this romantic movie, “Unbreakable,” the screenwriter, Sola Osofisan presents the viewer with a simple plot of a young newly-married couple based in Lagos, who are very much in love. The first hint about the character of Ikepo (A’rese) is the scene of paranoia. Her husband, Chidi (O. C. Ukeje) is beclouded by love and with the use of dramatic irony, he is portrayed as being slow to recognise the signs showing that his wife, Ikepo, is dealing with a mental illness. When his business partner, Mike (John Dumelo) shares a video of Ikepo in a manic episode on the social media with Chidi, the pace is set for this extraordinary story of unfailing love and tested loyalty. The 90-minute movie is like a level playing field for all healthcare providers for mental health patients, whether traditional or orthodox to have conversations about the issues surrounding mental health such as lack of adequate mental health facilities, stigmatisation, abandonment of patients and more.
Unbreakable is a movie project executed by the Unbroken Partnership Limited made up of the trio of Buky Campbell (producer), Sola Osofisan (screenwriter) and Ben Chiadika (director) who is best known for directing the MNET multi award-winning soap, Tinsel. Campbell who is very enthusiastic about the project, remarked that it is a necessary project, considering the situation in the country.
“In the light of the present circumstance throughout the country, especially with all the stories about suicide, we think a story about mental health is very timely because it draws people’s attention and it starts a conversation,” she explained. “I think it is important to say that in terms of mental illness, what works for one may not work for the other. There is a peculiarity to seeking help because there are so many types and no one side fits all. The important fact is that the conversation has started about mental health.”
Though the movie was not made solely for commercial gain, it requires funding for it to be screened at various venues. “We plan to show this movie for free across university campuses nationwide through sponsorships from individuals and corporate organisations,” she continued. “As long as they are individuals who are thinking beyond themselves, this movie will get to where it should be. When we started this project, we wanted to be socially responsible. We wanted to tell stories that have meaning. We didn’t want to powder up out stories and make it pretty because life itself is not pretty. Mental health is one of the things we are targeting. Commercial success will come when we all realise that the topic is very important and timely. State governments can also come on board. Our aim is advocacy; reaching out to the masses and I know that the average undergraduate cannot afford to go to the cinema to watch a movie. That is why we want to meet them where they are; to benefit from the movie.”
The first show is on September 21 at The Crab, Department of Theatre and Film Studies, University of Port Harcourt, and then it will go on a tour of other universities afterwards.
“UNIPORT is my alma mater,” she added. “One of our stars in the movie, Bimbo Manuel also graduated from the university. We feel that we owe that university something because it trained me to be who I am today and God bless Prof. Ola Rotimi who instilled in us the values that had taken us this far.”
One of the partners of this movie project is Olamma Cares Foundation, a non-governmental organisation with a 24-hour hotline for people to call in case they are depressed or in crisis.
“When a person you know is dealing with mental health crisis, they need a solid support. Most patients are abandoned by family,’’ she remarked.