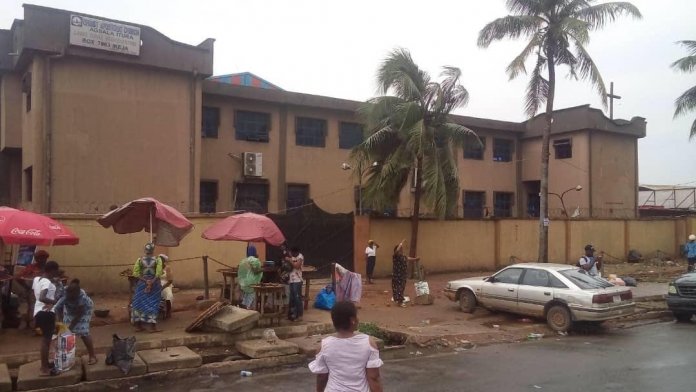 Following a viral message on social media that some suspected herdsmen had attacked the convoy of members of the Abule Egba branch of Christ Apostolic Church, Sunday Ehigator went on a fact-finding mission
“Dateline Saturday June 1, 2019. Fifteen members of CAC Agbala Itura, Ile-EPO, Oke-Odo, Lagos were returning from a funeral outing in Ekiti. They were in their church bus, a Toyota Hiace and were hoping for a safe trip to Lagos. On reaching Ife-Ijesha Expressway in Osun State, they saw  terrorists on the expressway armed to the teeth. The driver of the bus made a dash for it right through the men on the highway. The bandits were taken by surprise by the audacity of the driver. They opened fire but the bus escaped. It was however riddled with bullets. No one died.
“The people in the bus gave tearful testimonies at their church at CAC, Agbala Itura, Ile-Epo, Oke-Odo yesterday Sunday, June 2, 2019. The bus is right there parked on their premises, full of bullet holes.
Is anyone that matters reading this? Osun is now an ungoverned part of Nigeria. (Sic) bandits pick people on the roads in Osun like snails, take them deep into the forests, rape, maim and dehumanise them before the lucky ones are released after their relatives had paid hefty ransom. The unlucky ones? They are under the ground, butchered by the Sahelian savages.”
The above quote was the content of the viral message that purportedly emanated from the church members. To unravel the allegation that herdsmen had unleashed mayhem on the highway, this reporter alongside THISDAY Photographer, Etop Ekutt, went to the church.
THISDAY Findings
Before the THISDAY team finally located the church, the team was mislead by Google map to another CAC Agbala Itura, Ile Epo area, along Agbara-Badagry Expressway, were they met with one Pastor Olawunni whom upon enquiry confirmed to THISDAY that it happened at the CAC Agbara Itura, located along Abule Egba Road, Ile-Epo. With the correct location at hand, the team found its way back to the right church.
Although debunked by the church, further findings however revealed that there might be an element of truth but not on the scale it was being touted. Upon receiving this information, THISDAY team defied the rain and made a visit to the church premises to confirm the story. On arrival at the church premises, the team was received by the Head of Sound/Engineering Department CAC Agbara Itura, Mr. Olawale Shittu, whom after debunking the news, denied them access to any other top official or pastor of the church.
In fact, he practically walked them out of the church premises, took pictures of them and instructed the church’s gatemen not to allow the team entrance into the church premises again.
However, proactively the team was able to interact with few members of the church anonymously, who affirmed the authenticity of the testimony.
According to them, it was a miraculous escape. They said they were all full of tears and praise to God when the testimonies of their escape was shared in the church on Sunday. They thanked God for not putting the church to riddicle otherwise, they queried how would it have been heard of that those who went for burial met their death on their way back.
Church’s Reaction
The church however on same day after THISDAY visited it, made public information debunking the news through the CAC worldnews website www.cacworldnews.com.
According to the report as published on the website, “The Zonal Superintendent of Christ Apostolic Church, Agbala Itura Zone, Ile-Epo Oke-Odo Lagos, Pastor Diran Adeleke has denied the rumour making rounds that the church bus escaped herdsmen attack last weekend on its way back from a ceremony along Ife-Ijesha Expressway.
“In a telephone chat with CAC NEWS, Pastor Adeleke who denied that the church bus escaped herdsmen attack however said that it was partially true because the incident involved the choir master  of the church who was in a commercial bus that escaped herdsmen attack along Ife-Ijesha Expressway.”