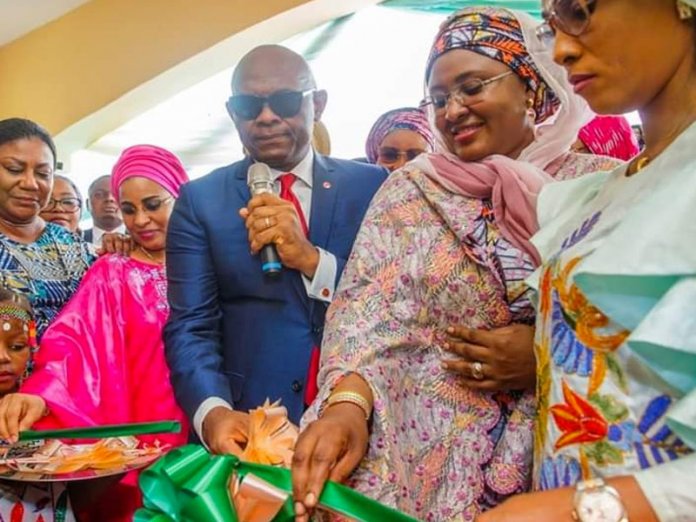 The facility donated to the Federal Medical Centre (FMC) Yola, was built by the Aisha Buhari Foundation, which was founded by Mrs Aisha Buhari, the wife of the president.

The maternity complex brings to two, such facilities constructed and donated by the wife of the president, following the one donated last year in Daura.

Elumelu, who was full of commendation for the gesture by the wife of the President, noted that such projects were needed from more Nigerians and Africans, so that more lives would be touched and more youths would be empowered.

He noted that he was particularly impressed by the hospital facility as it will not only touch lives, but will also create employment. This, according to him, falls in line with the objectives of the TEF, which has as its bedrock the empowerment of youths.

A statement quoted Elumelu to have added: “As the founder of TEF, I feel rather privileged and honoured to commission a project such as this. We need to begin to realize in this part of the world that what counts is not the amount of money we have in our savings account. What counts is the impact we make and the lives we touch.

“I will urge and encourage every reasonable Nigeria to support initiatives like these. This is a good thing that the wife of the President has done. I think this is worthy of support.”

Continuing, he said, “I believe that anything that impacts improves and supports lives should be the concern of everyone. This is why in the TEF, we believe in empowering young Africans and Nigerians, making sure that we make them fishermen and not just relying on people forever. This project touches my heart and that is why I am here.”

Elumelu who pointed out that the maternity centre would contribute to the general development of Adamawa state and Nigeria as a whole, noted that it will ultimately take the country a step further towards achieving its aim of economic development; adding, “I will like to congratulate the first lady for this gesture. What she has done today demonstrates keenly that she is interested in developing Adamawa state and more importantly in supporting women across the country.

“This maternity home is expected to serve everyone, transform, and preserve lives and help to cure people. I think that economic development sits better with a good healthcare system.”

Apart from Elumelu, first ladies of some African countries including Ghana, Gambia, Niger, Ivory Coast and Chad were also at the venue, to lend their support to the first lady for the remarkable venture.

In her comment, the wife of the president said the idea was to extend the initiative to the six geopolitical zones in the county having done something similar in Daura, the home state of President Buhari.

She said, “I am happy that we have done this today, and I want to thank everyone that has contributed in making this a success. The facility was created to cater for the health needs of women and children of Adamawa and the neighbouring states. We need more foundations to be supported by wealthy Nigerians, to see how we can make a difference in the lives of the less privileged.”