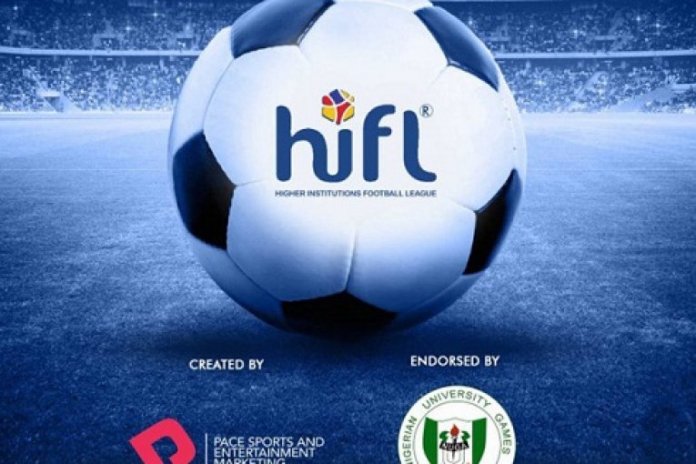 As teams prepare to slug it out in the 2019 edition of the Higher Institutions Football League (HiFL), draw for the group stages held at the Oriental Hotel in Lagos last Friday. New team jerseys and logos were also unveiled at the ceremony.

The 32 teams that qualified for the group stage were drawn into eight groups of four teams each starting from Group A- Group H.

Games in group stages will be held across the eight host institutions that were automatically ceded for the draws for ease of logistics and facilities.  The first two teams from each group will automatically qualify for the round of 16.

Explaining the reasoning behind the modalities for the draws, the Director of PACE Sports and Entertainment Marketing, Mr. Sola Fijabi said the format was reviewed to enhance the league and create more excitement for its teeming fans.

“HiFL is a game changing initiative and it is heart-warming that the league has gained acceptance across higher institutions in Nigeria. We have reviewed the rules of the game in line with our experiences from last year and global trends in football and collegiate sports. We have done this in conjunction with our partner, the Nigerian University Games Association (NUGA) and other technical partners. Our desire is to create a league that would be of pride to us as a company, the Nigerian universities and indeed our esteemed sponsors,” Fijabi said.

StanbicIBTC, one of the major sponsors of the league recently signed a five-year deal with the league. Regarding sponsorships, Fijabi said, “our sponsors have been very supportive. We truly appreciate their alignment with the HiFL vision. While we acknowledge the commercial involvement, more appreciated is their support for the social development of Nigerian youths through sports. We sincerely hope that these engagements will yield the desirable outcomes in due course.”

In his remark, the President of the Nigerian University Games Association (NUGA), Prof. Stephen Hamafyelto enthused that NUGA is committed to ensuring a more successful outing taking key learning from the past edition.

The Group games are to begin on June 18 and will be played over 21 weeks. The round of 16 will be played in a return leg elimination basis before the finals where the Super Four teams will play in a grand finale to be held at the Agege Township Stadium, Lagos.