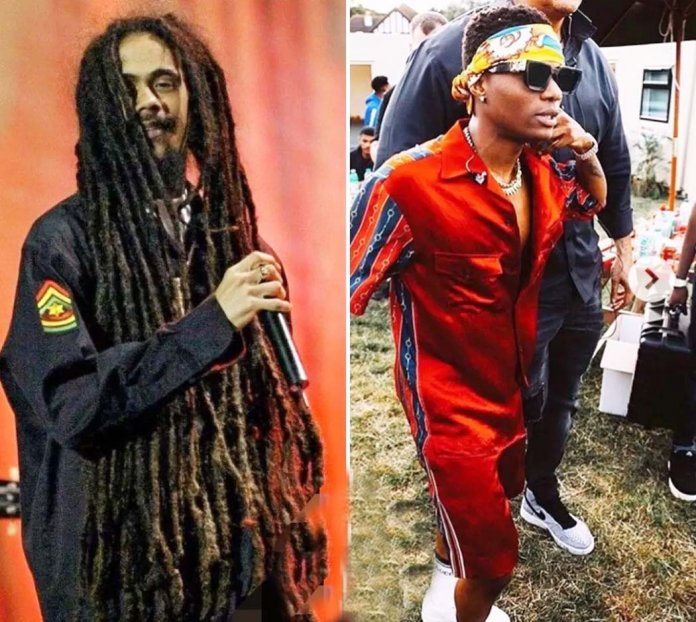 Months after revealing his intention to work with Damian Marley, son of late Jamaican Reggae legend, Bob Marley, music superstar, Wizkid, is on the verge of actualising his plan as both artistes are currently in the studio doing the song.

Pictures of both singers surfaced recently with Wizkid hinting at a song that that would make his anticipated album Made In Lagos. The album which is expected to drop this year will be the singer’s third. His first was Super Star which was a massive success. He didn’t sleep on that as he went ahead to drop another hit album titled Ayo.

Damian, just like his late father, sings reggae. He is the youngest son of Bob Marley.

At age 13, he formed a musical group called the Shephards. The group opened the 1992 Reggae Sunsplash Festival. The band fell apart in the early 1990s and Damian started his solo career.

Last year, Wizkid watered the appetite of fans by dropping an LP Sounds from the other side, which featured top US singers – Chris Brown, Future, Trey Songs.

“Made in Lagos” hasn’t gotten a specific date of release yet, but the singer has been hinting on what fans should expect. Few months back, he revealed that the album would be quite different from his previous works. According to him, he’s going to be hurting some people with it.

The move is expected to further boost Wizkid’s rising profile with international artistes in recent times. In 2016, he was featured by popular Canadian rapper Drake Graham in the song ‘One Dance’. Some other of his collaborative efforts include ‘Like This’ with DJ Henry, ‘Shabba’ with Chris Brown and ‘Mamacita’ with Tinnie Tempah.

The ‘Ojuelegba’ crooner has sold out concerts all over Africa and Europe during his recent world tour and featured on several international magazines, including Vogue. His contribution to the Nigerian Music Industry has earned him accolades.