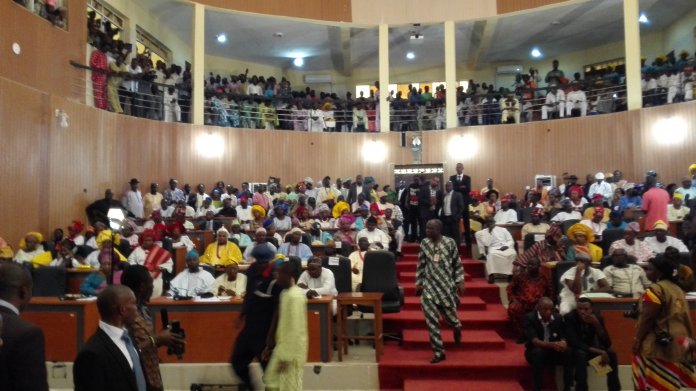 After thorough screening of the finances of the 16 local governments in Ekiti State and realised that there were alleged cases of fraud, the State House of Assembly has ordered the suspended council chairmen to refund N3.6 billion to the state’s coffers .

The lawmakers at their sitting yesterday said the order was predicated on the report of a panel which indicted the council chairmen of mismanaging the money.

The sitting was the valedictory session of the fifth Assembly as the sixth Assembly will be inaugurated by Governor Kayode Fayemi on Thursday.

Passing its resolution, the Assembly ordered the suspended chairmen to refund the N3.6 billion into the coffers of the state government and also recommended appropriate sanctions against them.

This was part of the recommendations by the House Committee on Public Account in its report on the local government chairmen which was adopted by the House.

The report of the panel was presented by the member representing Ikere Constituency 2, Mr. Sunday Akinniyi.

The former Speaker, Mr. Kola Oluwawole, representing Moba Constituency 1, had pleaded for leniency on behalf of the suspended chairmen but his plea was turned down by the majority of his colleagues.

Oluwawole, like the suspended council chairmen, are members of the People’s Democratic Party (PDP).

The PDP members opposed the recommendation for the sanction claiming that the screening was full of irregularities.

They were, however, overruled by the Speaker, Mr. Adeniran Alagbada, who claimed that the chairmen went too far in their actions.

Alagbada cited example of his council area, Ise/Orun, where over N300 million was set aside for building of secretariat but the contract was not executed.

Meanwhile, the governor of the state, Dr. Kayode Fayemi, yesterday signed eight bills into law, saying his government will continue to demonstrate strong political will in the implementation of the existing laws in the state.

The signing of the bills marked the end of the legislative duties of the fifth Assembly of the state.

The governor assured that the laws will be implemented for the overall development of the state.

Speaking on the robust relationship he enjoyed with the lawmakers, who are predominantly members of the Peoples Democratic Party (PDP), Fayemi said: “History is made in different forms, but I consider our partnership as historic partnership not minding that many of you came from the PDP while the executive branch that took over on October 16, 2018 was from the APC.

“Some believed that the two parties can’t have point of engagement, but this was not so. I always talked about belonging to Ekiti and that is what you have done.

“I cannot recall any time in the last 20 years when eight bills were signed into laws, so this is significant and these are laws that are important to our state.

“The Administration of Civil Justice Law was pioneered by Ekiti. Some of the laws like land grabbing law will help us tackle some of our challenges with land owners”.

The governor added: “As you have rounded off today, this is not the end of the road for you with the way you have demonstrated your love for this state. That culture of belonging to Ekiti party, you are all exemplars of it and I commend you”.

Speaking earlier, the Speaker of the House, Hon. Ebenezer Alagbada, said the Assembly had been able to pass 10 bills since Fayemi took over last year October.

He said: “We also thank his Excellency for the South African trip. This journey has enriched our knowledge of legislation and I know the clerk will relay such knowledge to our successors to guide them in their duties.

“We must learn how to separate politics from governance, by doing our best and operate with love in whatever capacity we find ourselves. The last four years have been so eventful. We have come, we saw and we have conquered”.