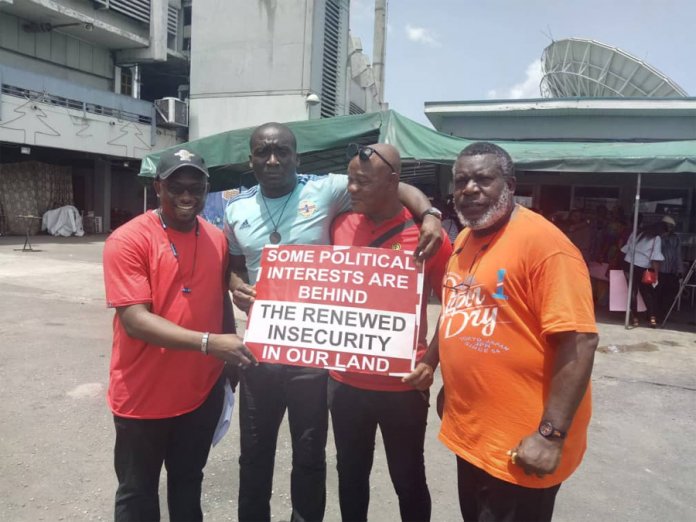 Actors under the umbrella body of ‘Concerned Actors And Seasoned Nollywoood Stars’ have raised their voices against the incessant senseless and political motivated killings in North West Nigeria as well as other parts of the country.

The film practitioners led by veteran Nollywood star Ejike Asiegbu at a rally held recently in Lagos decried the spate of killings which it described as a ‘horror movie’. “We have watched the horror movie in Zamfara State and concluded that our politicians have thrown the sanctity of human lives to the dogs with the way and manner that they have carried their political activities which have resulted in the loss of hundreds of lives and destruction of properties,” Asiegbu said.

He said actors will no longer fold their hands “and watch politicians continue with their nefarious activities that have brought untold sorrow and blood to numerous families” adding that “the worrisome aspect of the whole issue is the fact that these politicians have been dramatizing in public and on pages of newspapers condemning the killings when in truth, the entire world knows they are the ones behind the senseless killing of innocent women and children because of their vested interest.”

Asiegbu berated the political elites for “turning their back against the people” they swore to protect. “We know gold is a precious stone but to make the mistake of equating gold with human life is an anomaly that must be resisted by all and sundry in the interest of peace and tranquility in Northwest Nigeria.

“These gold miners are not spirits, they have names, and they reside among the people, and above all, they have sponsors. But they must realize also that the same people sponsoring them to kill innocent people today can decide to turn against them and order their elimination tomorrow.”

While hoping that people behind the Zamfara killings as well as other killings across the country would see reason and stop it, Asiegbu stated that “the ‘Concerned Actors And Seasoned Nollywoood Stars’ have reviewed the situation critically in North West Nigeria and concluded that unless urgent and proactive measures are taken, the killings will not abate especially with the level of desperation exhibited by the main players behind the carnage. And this as well is extended to other parts of the country and we state categorically that the gold in Zamfara State is not for a group of individuals or people but belongs to all of us Nigerians just as the oil in the Niger Delta belongs to all Nigerians.”